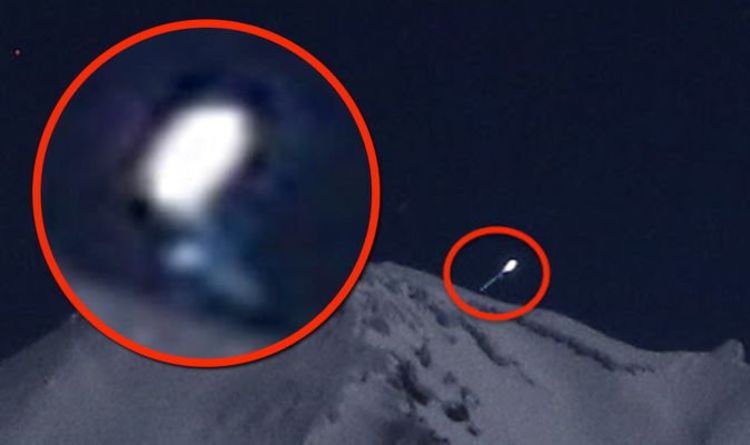 • On April 17th, visitors to Mount Shasta in Northern California near the Oregon border took a photo of a “large light” with a cigar-shaped object directly below it exiting the mountain and flying into the atmosphere. The photographer submitted the photos to the Mutual UFO Network (MUFON). (see photo image above)

• Self-styled UFO expert Scott C Waring analyzed the images and believes they are genuine pictures of an alien spaceship. Waring says the US volcano (Shasta) has a long history associated with alien encounters. “‘In some stories, the city is no longer inhabited, while in others, it is inhabited by a technologically advanced society of human beings or mythical creatures’.”

• “I was told as a kid the stories of beings that lived below Mount Shasta, one of which is supposed to be the legendary Saint Germain who is famous for starting the new cultural Age of Aquarius, also called Master Rakoczi,” said Waring. “I call it an advanced alien race that is spiritual in nature and mostly keeps to themselves below Mount Shasta.” “These photos are proof that aliens still live within the mountain.”

• According to UFO expert Brian David Wallenstine, Mount Shasta is one of the most frequent UFO sighting hotspots on the planet. “To think that we humans are the only conscious life form in an infinite universe is not only trite but also egotistical and inaccurate. “It is for us to assert and see the truth through the plentiful discoveries made over the millennium in sightings recorded on rock drawings, archaeological digs, anthropological data, writings, pictures from telescopes and the advanced technology found, as our roadmap home.”

• Brigitte Nerlich, a professor of science at the University of Nottingham, blames the image on a psychological mind trick known as pareidolia: ‘the imagined perception of a pattern or meaning where it does not actually exist’.

The supposed alien UFO was snapped coming-out of Mount Shasta – a volcanic peak in Siskiyou County, California. A witness photographed the unidentified object on April 17 this year and submitted the photos to the Mutual UFO Network (MUFON). The UFO witness said the object was a “large light” with a cigar-shaped object directly below it. The UFO then supposedly took off and disappeared from sight.

The images have since been analysed by self-titled UFO expert Scott C Waring, who believes they are genuine pictures of an alien spaceship.

Mr Waring runs the website ET Data Base, where he analyses and compiles UFO sighting reports, video clips and photos.
In regards to the Mount Shasta UFO, Mr Waring said the US volcano has a long history associated with alien encounters.
He said: “Mount Shasta in the Wikipedia says ‘it is often said to hide a secret beneath its peaks.

“‘In some stories, the city is no longer inhabited, while in others, it is inhabited by a technologically advanced society of human beings or mythical creatures’.”