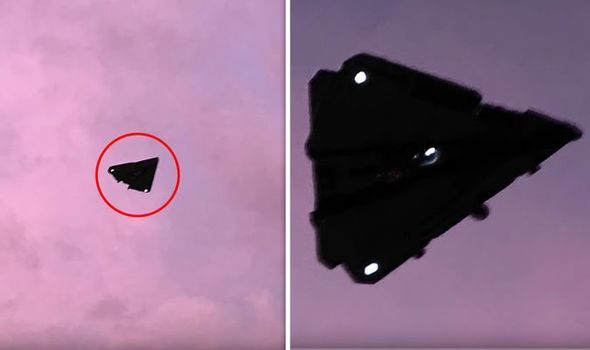 Mysterious UFO Above Secret US Military Base Sparks Frenzy

• Blake and Brett Cousins of ‘thirdphaseofmoon’ YouTube channel has received multiple photos from multiple witnesses who have seen a strange triangle-shaped craft in the vicinity of the Portland Air National Guard Base (PANG) in Oregon. (see 10:16 minute video below)

• Conspiracy theorists suggest the aircraft could be a super-secret stealth spy airplane, while others point to “reverse-engineering” linked to alien contact. “You can rule out any photoshop because these new, crystal-clear photographs show the sharp edges and the motion involved.” “Could this be proof of reverse engineering?”

• The triangular aircraft have been linked to the infamous TR-3B Black Manta developed for the US Air Force as part of a secret black project. One viewer suggested that it could be a new stealth drone, the XQ-58A. Other viewers remarked, “This is definitely NOT a TR3B!  It looks like an F45.” One viewer commented, “[T]hey want to be seen.” “[I]t’s… how they control disclosure”.

The “triangular ship” near the PANG base in Oregon has raised suspicions of a bizarre US military test.

Conspiracy theories suggest the aircraft could be a super-secret stealth spy airplane, while others point to “reverse-engineering” linked to alien contact.

Blake and Brett Cousins of thirdphaseofmoon, who posted the pictures in a clip this week, cited “multiple accounts” from a number of onlookers in the area.

They said: “We recieved multiple eyewitnesses from residents in the area.”

They continued: “You can rule out any photoshop because these new, crystal-clear photographs show the sharp edges and the motion involved.

“I mean, look at the inner chamber inside this craft. This area has been known as a hotspot for strange sky sightings. Could this be proof of reverse engineering?”

10:16 minute video of triangular craft over the PANG Base, Oregon
(thirdphaseofmoon YouTube)