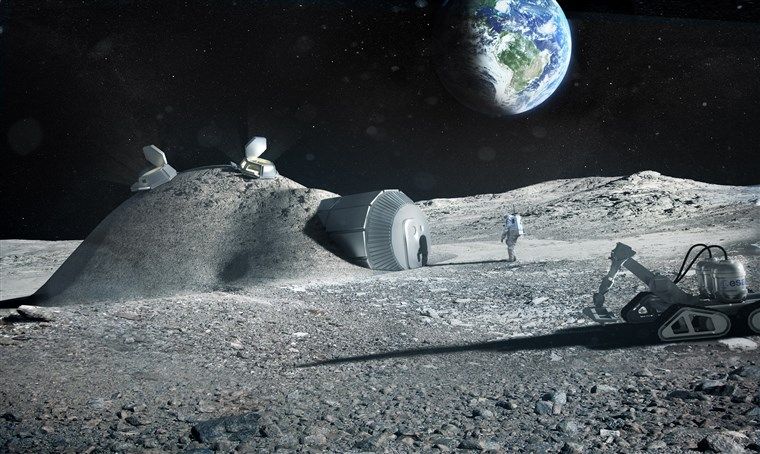 Moving to the Moon – What Will the First Extraterrestrial City Look Like?

• The Chinese probe “Chang’e-5” has successfully collected lunar rock and soil samples from the Moon, and is on its way back to Earth. This feat marks another stage in China’s ultimate plan to establish a permanent base on the Moon. Russia’s Roscosmos and NASA are also planning “lunar cities”.

• The last time humans were on the Moon was on December 14, 1972 when American astronaut Eugene Cernan walked on the lunar surface. In the coming years, we will inevitably witness a substantial increase in the Moon’s active development. However, unlike in the past, space agencies find it too expensive to launch heavy rockets whenever they want to visit the Moon. Today’s space programs will be more inclined to create permanent bases both in the Moon’s orbit and on the lunar surface.

• The Moon is attractive for several reasons. First, as an outpost for flights to other planets in the solar system. Secondly, as a source of minerals – primarily helium-3 which is used to produce thermonuclear fuel. Third, scientists plan to place a radio telescope on the Moon’s far side, protected from Earth’s interference. Using this telescope, scientists hope to discover the ‘cosmic microwave background’ allowing them to reconstruct the events of the universe during the first few hundred million years after the Big Bang. Fourth, and perhaps the most important benefit of establishing a Moon base, will be to test experimental technologies that will assist human migration to other planets in the future.

• While the 1967 Outer Space Treaty does not specifically regulate the use of space resources, an unratified December 1979 UN General Assembly Agreement does attempt to address the activities of states on the Moon and other celestial bodies. However, on April 6, 2020, President Trump signed an Executive Order approving the commercial development of resources by the US on the Moon and other planets and asteroids of the solar system.

• The first problem with everyone wanting to colonize the Moon is not about science, but the legal and commercial aspects of everyone aiming to use the same locations and resources at the South Pole of the Moon (although it would be technically easier to make shuttle flights to and from an orbital space station). The South Polar Region is ideal because it contains relatively large “cold traps” where permanently shaded areas hold water ice which is essential for everything from drinking and growing food, to obtaining oxygen for breathing and hydrogen for rocket fuel. Also, it is never dark at the South Pole so you can continuously recharge solar panels. On the rest of the Moon’s surface, the night lasts for two weeks.

• Moon base developers suggest that mirrors can be fixed on craters’ edges and direct sunlight to shaded areas. The heated ice will turn into steam, which will go through a pipeline to an electrolysis plant where it is split into hydrogen and oxygen. Experts estimate that there are up to ten billion tons of ice in the cold traps near the South Pole. The water and oxygen needed to sustain a base with only four people would require several tens of tons of water per year.

• Ice can also be found in miniature cold traps, up to a centimeter in diameter, mostly in the circumpolar regions. Up to forty thousand square kilometers of the lunar surface could be covered in water ice. More recently, the SOFIA stratospheric Observatory’s infrared telescope detected signs of molecular water ice filling the voids between the grains of minerals in the lunar soil. If this ice could be harvested, the list of places to build a lunar base would expand significantly.

• The composition of lunar soil is 43 percent oxygen. By combining oxygen with hydrogen taken from other sources or delivered from Earth, you can produce water. For Moon dust to decompose in order to extract the oxygen, it needs to be heated up 900 degrees Celsius (1652 degrees Fahrenheit) which takes a lot of energy. Scientists suggest using giant mirrors that focus sunlight on the shell of a small reactor. Still, it would take years for a lunar facility to generate enough water fuel to send just one Apollo-sized spacecraft into lunar orbit.

• Despite all the difficulties, the European Space Agency (ESA) has already allocated funds to the British company, Metalysis, to finance the extraction of oxygen from lunar regolith. The company, along with scientists from the University of Glasgow, said that they successfully extracted 96 percent of oxygen from artificial lunar soil in experiments on Earth, turning the rest into useful metal powders.

• Unlike the Earth, the Moon does not have an atmosphere and a magnetic field. So structures in lunar bases must protect human inhabitants from cosmic rays, solar radiation, and a stream of meteorites. Shelters could be covered with a multi-meter layer of lunar soil, or the base could be located within a canyon or cave. Scientists have proposed a lava tunnel under the Marius Hills in the central part of the Ocean of Storms.

• The lunar base buildings themselves could be built using 3D printing from regolith particles, or with bricks made by melting regolith using a focusing solar reflector. Researchers calculate it would take three years to manufacture enough regolith bricks to build a two thousand square meter structure. Once built, the base could use a Sun reflector to illuminate residential premises and greenhouses. As part of a closed ecosystem, greenhouse plants would process organic waste and convert carbon dioxide into breathable oxygen. Astronauts on the International Space Station are already hydroponically growing and eating leafy green vegetables on board the station.

Yesterday, the lander of the Chinese probe “Chang’e-5” successfully separated from the orbital module and started landing on the Moon. It must collect and deliver samples of lunar soil to Earth. This is the next stage of an ambitious program, the ultimate goal of which is a permanent base on the satellite. Roscosmos and NASA are also planning “lunar cities.” About what will be the first human settlement outside of our planet is in the material.

To Leave, To Return

The last time humans landed on the Moon was 48 years ago. Then, on December 14, 1972, American astronaut Eugene Cernan, after walking on the lunar surface, said: “We are leaving as we came, and with God’s help, we will return.”

Over the past few years, several countries have declared their readiness to resume lunar programs. The Moon is attractive for several reasons. First, as an Outpost for flights to other planets in the Solar system-it is easier to start from it than from Earth.

Secondly, as a source of minerals-primarily helium-3: it can be used to produce thermonuclear fuel.

Third, on the Moon’s far side, scientists plan to place a radio telescope protected from earth’s interference. And with its help, they discover the cosmic microwave background, which they hope to reconstruct the events of the “dark ages” of the Universe-the first few hundred million years after the Big Bang.

And last, perhaps most important, the Moon’s base should become an experimental testing ground for testing technologies for human migration to other planets.

Therefore, in the coming years, we will inevitably witness the Earth’s satellite’s active development. But it is too expensive to send heavy missiles there every time. Today, no space agency will finance the sending of crews, as in the Apollo program. Everyone is inclined to create permanent bases — first in the Moon’s orbit and then on its surface. But this is not an easy task.