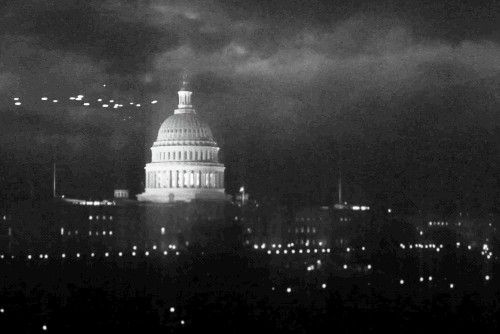 • On Saturday, July 19, 1952, Washington National Airport radar picked up a group of UFOs flying over Washington, D.C. That evening the UFOs remained, hovering over the capitol. “There was an attempted intercept,” says Dr. Kevin Randle, ufologist and author of the book: Invasion Washington: UFOs Over the Capitol. “But the (fighter) planes got there and everything was gone.”

• One week later, on Saturday, July 26th, the same crew operating the radar at Washington National Airport saw the same blips on their screen. The crew called for another fighter plane interception. Said Randle, “It seemed that every time the fighters showed up, all the uncorrelated blips disappeared from the radar. In other words, all the UFOs went away. When the fighters returned to base, the blips came back.”

• According to Rebecca Charbonneau of the University of Cambridge (in Cambridge, England), and an ‘expert’ on the search for extraterrestrial intelligence, also known as SETI, Project Blue Book was more than an attempt to follow up on UFO sightings. With the Cold War looming, Project Blue Book was a way to see if these UFOs could actually be technologically advanced Soviet aircraft. In the early 1950s, tensions with the Soviet Union were increasing and American surveillance technology was far less effective than today.

• Statistics supplied by the National Archives list 12,618 UFO sightings investigated by Project Blue Book between 1947 and 1969. All except 700 of those cases were readily “identified”. According to the Archives, Project Blue Book arrived at three major conclusions: 1) none of the UFO sightings posed a threat to US national security; 2) the technology present in all UFO sightings did not suggest otherworldly advancements to aircraft technology of the day; and 3) there was no evidence suggesting that the UFOs were from outer space.

• By January 1953, Harvard University astronomer and prominent UFO debunker, Dr. Donald Menzel, announce the CIA’s findings regarding the UFOs seen over D.C. and recorded on radar the previous July. The official explanation was temperature inversions, which occur when a layer of hot air moves over a layer of cool air and bends radar beams. Says Randle, the “so-called experts” came in and told the National Airport radar crew ‘what they really saw’.

• Regardless, Washington, D.C. was in the throes of UFO excitement. The Washington Post regularly reported updates on the sightings. “All’s Quiet Along the Potomac On the Flying Saucer Front,” read one headline in late July of 1952. They reported that a girl in Northwest D.C. saw a saucer in August. The American University student paper reported sightings over their campus in October.

• But one Vienna, Virginia resident wondered what all of the “whoop-de-doo” was about. In a Washington Post letter to the editor on August 15, 1952, he wrote: “I don’t see anything astounding about (flying saucers) at all. The air and the sky around us are full of wonders much more spectacular than saucers.”

• [Editor’s Note]   Where do I begin? These UFOs flew over Washington DC on two consecutive weekends, and hovered over the city for everyone to see. When fighter planes got near them, they disappeared from radar, and came back when they left. But all of this is “explained” as layers of air that can “bend radar beams” by the CIA and a Harvard astronomer who never met a UFO that he couldn’t debunk. Then a ‘SETI expert’ from Cambridge University, another deep state institution, defends Project Bluebook by pointing out that the Air Force was more interested in monitoring Soviet technology than actually explaining UFOs. What could be more important than a national security threat? Except that Project Bluebook’s conclusion was that these D.C. UFOs posed no threat to national security.

Furthermore, according to Project Bluebook, UFO technology across the board was no more advanced than the ordinary aircraft technology of the day and there was no evidence suggesting that the UFOs were from outer space. If you believe this, then you need to have your head examined. This is clearly a government cover-up straight out of the Robertson Panel Report of January 1953, and the Condon Report of 1968.

In reality, the CIA and the Air Force didn’t want the public to know that the UFOs buzzing Washington, D.C. were actually German Nazi-built spacecraft using extraterrestrial technology that was meant to coerce the US government into covertly joining with them and their Draco Reptilian allies, which the military industrial complex did. This began the deep state elite’s secret space program, which has developed over the past seventy years beyond anyone’s imagination. When the deep state is defeated by the higher consciousness of a (still mind-controlled) human population, all of these advanced technologies, including aerospace, medical, and food production technology, will become available to the planet.

On Saturday, July 19, 1952, the crew at Washington National Airport saw something unusual, according to the next day’s national headlines.
“Saucers Swarm Over Capitol,” read the front page of the Cedar Rapids Gazette. That headline, among many others that day, expressed an anxious curiosity as to why a group of unidentified flying objects spent their Saturday night hovering over D.C. just five years after the now-legendary incident in Roswell, New Mexico.

While other sightings may have eyewitness testimony or indirect evidence of the objects moving through our world, these UFOs spotted at National Airport were undeniably present on a radar.

It’s the reaction to the blips on the radar screen that really sets D.C.’s alleged alien incident apart, says Dr. Kevin Randle, a prominent ufologist and author of Invasion Washington: UFOs Over the Capitol. At one point, Randle says, fighter planes tried to head out to the UFOs’ locations.

“There was an attempted intercept,” he says. “But the planes got there and everything was gone.”

One week later, on Saturday, July 26, the same crew was working at the radar facility, Randle says. This time around, though, they were prepared for the potential of seeing UFOs. Sure enough, the blips reappeared on the radar screen, and the crew called for another interception.

“It seemed that every time the fighters showed up, all the uncorrelated blips disappeared from the radar. In other words, all the UFOs went away,” Randle says. “When the fighters returned to base, the blips came back.”

The incidents over D.C. was one of a number of UFO sightings across the country that the Air Force investigated via Project Blue Book, a study that began five years prior in Wright-Patterson Air Force Base in Dayton, Ohio. A code name for the country’s most well-known investigation into UFOs, it eventually became a household name for alien enthusiasts.

Project Blue Book was a systematic attempt to follow up on UFO sightings, says Rebecca Charbonneau, a Ph.D. candidate and Gates Cambridge scholar at the Department of History and Philosophy of Science at the University of Cambridge. She is an expert on the search for extraterrestrial intelligence, also known as SETI.

With the Cold War looming, the 1950s was a fascinating time for these sightings to have taken place, she says.