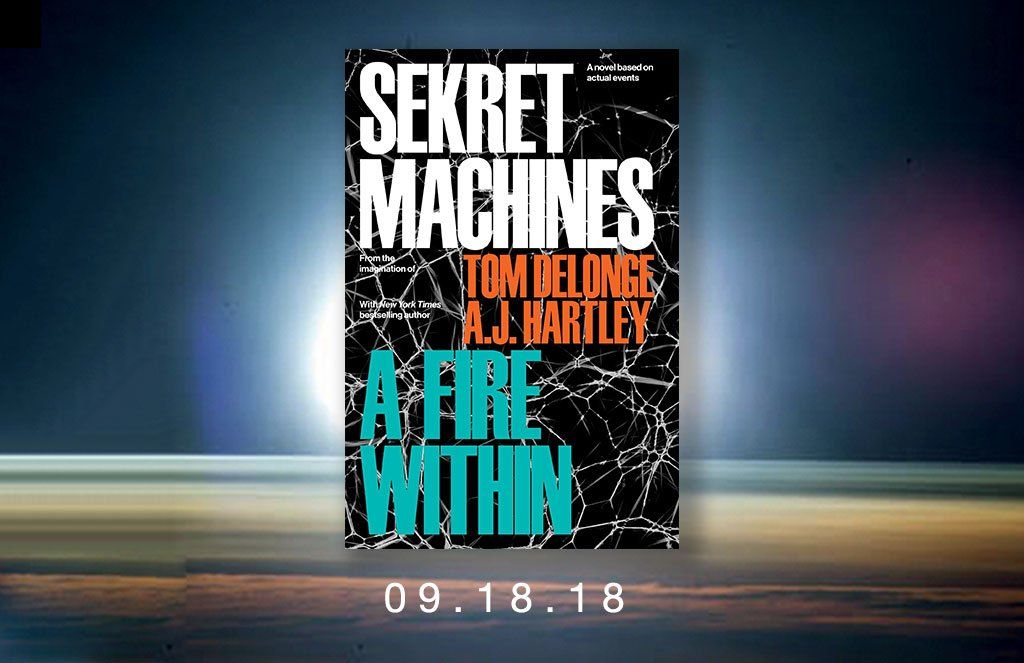 ExoNews Review of Sekret Machines, Part Two, “A Fire Within”

On September 18th, the highly anticipated second installment in Tom DeLonge’s Sekret Machines novel series was released. The book, A Fire Within, was well worth the wait. This second book by DeLonge and co-author A.J. Hartley is well-written and highly readable, and lives up to the standard set by book one, Chasing Shadows.

Once again utilizing the information he’s gleaned from his high-level contacts in the military and intelligence communities, Tom DeLonge has teamed up with the award winning writer and novelist, A.J. Hartley, to pen a very thoughtful and entertaining fictional story. But is it just a story? Do the esoteric concepts depicted in A Fire Within describe a reality that is closer to the truth than we know?

A Fire Within continues to follow the story line and characters that were developed in Chasing Shadows. A pair of childhood buddies, who have grown up to become a marine and a military test pilot, find themselves involved in some of the most highly classified programs on the planet. A website journalist lends a critical eye to a series of inexplicable events. And a wealthy young heiress provides the resources for their collective effort to make sense of the new realities confronting them.

But the more they uncover, the more questions emerge as their individual stories weave together culminating in a contentious showdown over an archaeological dig on the Greek island of Crete. Whether or not any ‘real answers’ are found, their pursuit reveals the existence of concealed layers of high consciousness and advanced technologies that raises the ultimate question: why have these undeniable truths been intentionally hidden from the public?

This is not an outer space saga with alien overlords threatening humanity. In A Fire Within, the exploits of this scrappy group of young people is set right here on Earth as they confront a deep state government establishment that conspires to keep its’ mystical and technological knowledge a secret. This newer generation is not afraid to ask tough questions, and they expect answers.

An underlying theme throughout the story is the notion of integrating ancient mysticism with our current understanding of modern physics to take it to the next quantum level. As one enlightened scientist in the novel imparts, “The concept of energy fields connecting all things is ancient wisdom in matters of religion… What if we stopped viewing these ideas in the contemptuous terms of antiscience and the primitive? What if we were able to assimilate both positions as compatible within an expanded notion of physics, a unified theory…?”

It is not surprising that such an accomplished writer as A.J. Hartley, a USA Today and New York Times bestselling author of adventure books geared toward young adults, would create yet another highly regarded novel. What is surprising is the depth of information that the story conveys, which the world is only now on the brink of perceiving. This is the contribution that DeLonge brings to the project.

The resulting work will appeal to truth-seekers of all generations whose consciousness will expand a little bit more from reading it, and will motivate them to continue to pursue an understanding of our true collective reality. The end result of media projects such as A Fire Within will be a more enlightened populace that demands full disclosure from the ‘powers that be’ who are intent on keeping this reality a secret.