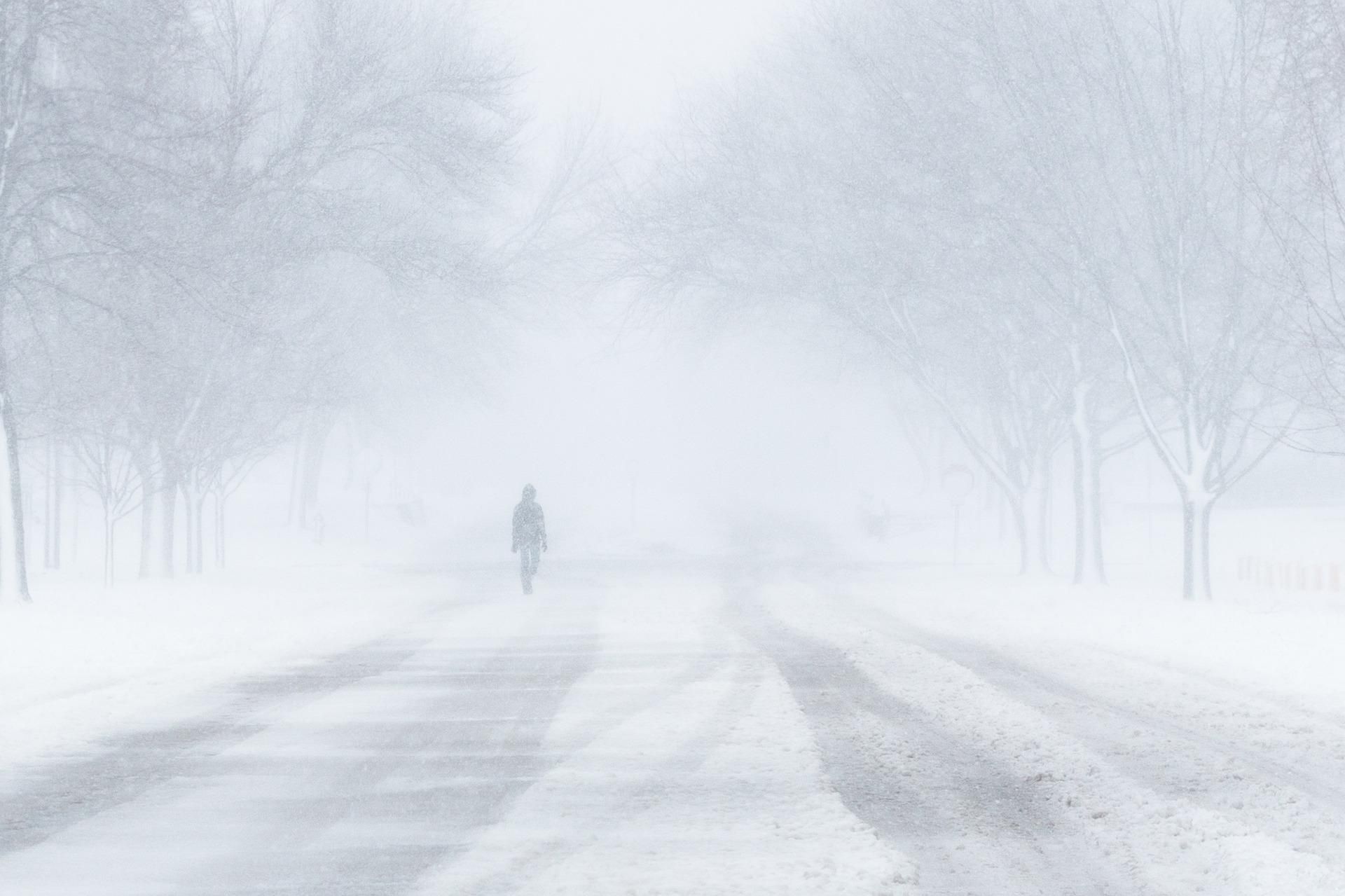 Encounter With an Extraterrestrial in an Alaskan Blizzard

• Dr. Ardy Sixkiller Clarke, a Cherokee/Choctaw and Professor Emeritus at Montana State University, has been collecting encounters between Native American Indians and ‘Star People’ for many years. In her book, “Encounters With Star People, Untold Stories of American Indians” she explains how her fascination with Star People came from stories told to her by older relatives, like her grandmother, when she was a child.

• In one of the chapters, Clarke describes a story told to her by an Alaskan Native named Ross. Ross operated a snowplow for a living, and on one particular night he was working a 50-mile stretch of highway during a terrible snowstorm where visibility was almost zero. About an hour into his shift, Ross got a call from another driver, Bill, who told him that there was a strange glow up ahead on the roadway. Before Ross had a chance to respond, he came upon a round disk with bright orange lights around the bottom sitting in the middle of the highway, covering two full lanes. Ross stopped within 20 feet of it, flipped his lights up and down and tried calling Bill, but his radio was dead.

• Suddenly, blinding white lights came from the disk. The craft moved upward and was gone. Ross sat there for a moment, not believing what he had just seen. Ross realized his truck engine was off, although he had not turned it off. When he turned the key in the ignition, the snowplow’s engine came to life. He put the truck in gear and began to move forward when he felt something bump near is truck’s front right tire.

• Ross stopped and was preparing to go out and see what had hit his his truck when he saw a hand reach upward and pound on the side window. Then a second hand appeared. “It was the scariest damn thing I have ever seen. I swear to you. Those hands only had four digits!” said Ross. “I turned on the light inside the cab and suddenly a face appeared and stared at me. Suddenly, it turned and ran across the road to a stand of trees and disappeared.”

• The creature ran across the road into the woods. Ross decided against going out into the minus 70-degree temperature and figured that was the end of it. But it wasn’t. The creature re-appeared in the middle of the road ahead of him. He somehow understood that the creature was cold and needed shelter. Ross telepathically offered him to come inside the truck, but the alien creature refused. He stood in the middle of the road and told Ross that it was cold, and that it was Ross’ fault.

• The creature telepathically explained to Ross that he had been outside in the snow when Ross’ truck came upon the craft. In the alien crew’s haste to leave, they left without him. Ross again invited him inside the snowplow, feeling that he “could not leave him outside in the cold”. Reluctantly the creature came inside, but not like one would normally climb inside a truck. He just appeared. One minute he was standing in the middle of the road, the next minute he was inside the cab with Ross.

• The alien was small in stature. He had a human form, but he wasn’t human. He could have passed for maybe a ten year old child from a distance. When Ross asked how he could simply appear in the cab, the alien told him that everyone from his world could come and go like that. He said that Ross could do it, too. “I just had to learn to use my brain in the right way,” the creature told him. “I didn’t understand what he meant.”

• The humanoid alien told Ross that his spacecraft had malfunctioned, and they’d set down momentarily for repairs. The crew didn’t know that they were sitting on a highway because of the storm. The small alien was curious and had gone outside of the craft to do some testing of the snow. When Ross’ snowplow truck came upon them the crew were shocked and in a hurry to leave. In their confusion, they took off without him. As a rule, the alien crew were not allowed to make human contact. They had already violated several rules of their travel. The alien said that they were a young crew and would likely lose their rights as explorers if their superiors discovered their mistake.

• The alien was fascinated with the snowplow and how it worked. He considered it a rather primitive machine and remarked that humans put too much reliance on oil-based machines. He said they should spend their energy on studying the use of magnetic propulsion for travel. He said that on his planet, the weather never varied. He had never experienced snow or extreme cold in his entire life, and hoped never to repeat the experience.

• “That was the longest night of my life,” said Ross. Not knowing what to ask an alien, Ross and the creature rode along quietly as Ross continued his snowplowing rounds. Once he made it to the 50-mile point, they turned around and began the journey back again. It was snowing hard and the roads were covered with another four inches of snow. On the return trip, the spacecraft appeared again in the middle of the road at the exact same spot as earlier. The alien suddenly disappeared. Within seconds, Ross saw him in front of the spacecraft. The pulsating lights outlined his shape in the dim light, and Ross detected a brief and simple salute or a wave. Then the craft was gone.

• The day after this encounter, two military officers showed up at Ross’ work and asked if anyone had reported seeing strange lights or UFOs on the previous night. His boss told them there were no reports. Both Ross and Ed, the other driver, decided it would be best to keep quiet. They didn’t want to lose their employment because of some government investigation.

• The ET phenomenon leaves no aspect of humanity untouched. It greatly expands our human consciousness and the way we perceive ourselves, the cosmos, and the nature of reality. Think of all that will change when we seriously consider not only the existence of off-world civilizations but the technology they use to get here. We Earth humans are natural born explorers, meant to traverse the universe in search of discovering new worlds and other life. Perhaps this is what these alien beings were doing.

• The topic of UFOs seems to be getting a lot of attention these days in the mainstream media. But ‘powerful interests’ will no doubt try and control the narrative. How will we ultimately experience our potential? We need to look at what holds us back. Do our ideas, beliefs and worldviews truly hold up to the information out there? At this point, we know for certain what has been denied for decades – that UFOs are real.

The topic of UFOs seems to be getting never-ending attention these days by the mainstream media, which is something quite different from a decades long ridicule campaign that’s taken place. Recently, the New York Times covered a story about Eric W. Davis, a renowned astrophysicist who worked with the Pentagon UFO program, stating that he gave a classified briefing to a Defense Department Agency as recently as March about retrievals from “off-world vehicles not made on this Earth.”

Mainstream media coverage of the UFO topic is a deep discussion, and it’s a topic, like everything else, where the ‘powerful interests’, for lack of a better word, will no doubt try and control the narrative and shape our perception of this reality.

All in all, at this point we know what has been denied for decades, UFOs are real. The next question now is, what are they and who’s manning them?

indeed real. It’s a shame that something has to be acknowledged by the mainstream for it to be considered real. Just as the evidence was there for the existence of UFOs when they were ridiculed, “there is abundant evidence” that “civilizations have been visiting us for a very long time.” – Dr Brian O’leary, NASA Astronaut, Princeton Physics Professor. That is to say, there is ample evidence, in my opinion, suggesting that some of these UFOs are made by and operated by beings from other planets, civilizations and dimensions.

With this belief, I’ve dived into the lore of extraterrestrial encounters for quite some time. I find it fascinating how thousands of stories can corroborate with each other, and I find encounters with extraterrestrials, although they cannot be verified, to be a critical part for anybody to investigate if they want to have a broader perspective on the UFO phenomenon.

Unfortunately, most people don’t actually research the subject and this often leads them to think there is no real evidence, and even report that to be the case.

At the very least, these stories which number in the tens of thousands, if not millions, are very fascinating.