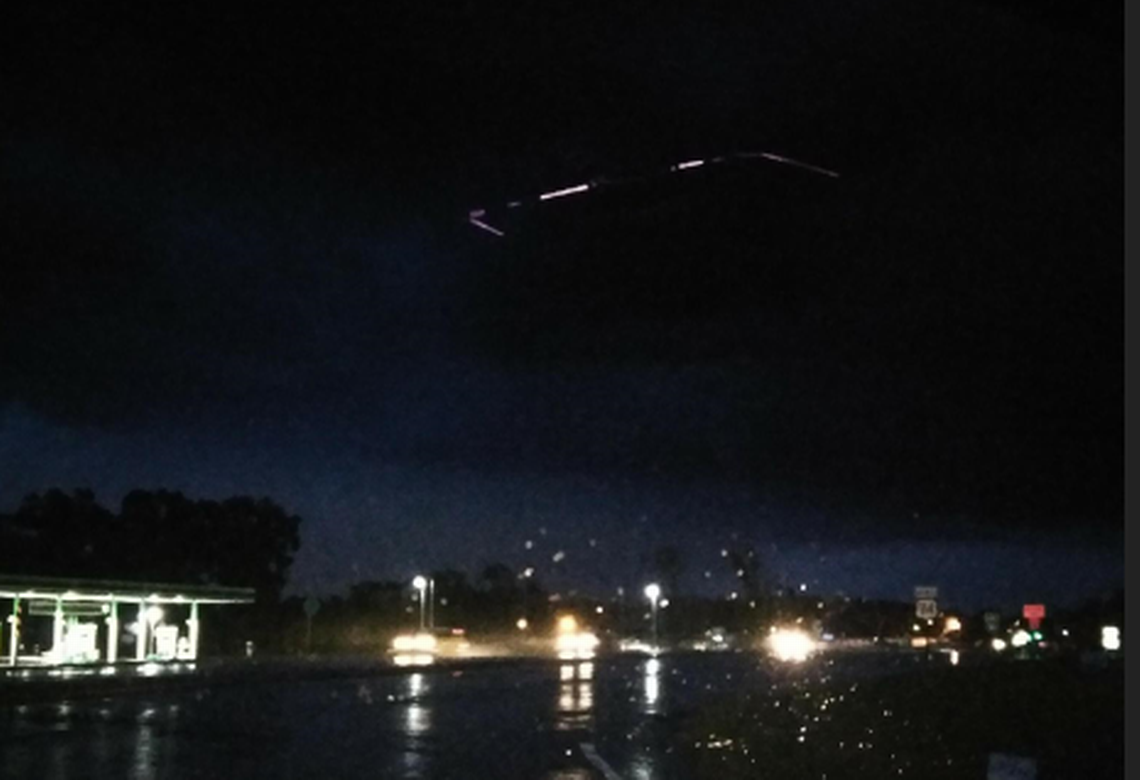 • Javion Hill of Kings Mountain, North Carolina, was driving along a highway southwest of Charlotte, NC on the evening of August 18th during a rain storm when he noticed something square hovering above the tree line, with its edges fringed in lights. Hill was able to take several photos of the object while driving. When he pulled over at an exit to get a better photo, the object had disappeared.

• Hill says it’s possible what he saw was a military craft. Conspiracy theorists maintain many UFO sightings in the region are actually an experimental military anti-gravity spacecraft based nearby in Fort Bragg, Pope Field, or Camp Lejeune.

• [Editor’s Note]   Dr Michael Salla has revealed that the MacDill Air Force base near Tampa, Florida is home to not only the famed TR3B triangle anti-gravity craft, but to a new rectangular craft as well. See articles: “Covert Disclosure of Antigravity Craft Near MacDill AFB” (Oct 20, 2017) and “Insiders Reveal Details of NASA & USAF Secret Space Programs” (Aug 28, 2018).

Another alleged UFO sighting near Charlotte has appeared on Facebook and in this case, it was posted by a husband and father who says he doesn’t necessarily believe in UFOs.

Javion Hill, 35, of Kings Mountain, North Carolina, says he took several photos of the object during a storm on the night of Aug. 18, as he drove on U.S. 74 southwest of Charlotte.

The images feature something square hovering above the treeline, with its edges fringed in lights. Hill told the Charlotte Observer the craft frightened him to the point that he didn’t sleep that night.

“I was on my way home with my wife on the speaker phone, and it looked like there was a tornado coming, so I was trying to take a picture of the clouds for my wife,” says Hill.

“But then I saw something that wasn’t normal and I was, like: ‘Oh my god, what is that?’ I started trying to take as many pictures of it as possible while I was driving.”

Hill says he pulled over at the next exit to try and get video, but the aircraft had vanished. A heavy rain followed instantly, he said.