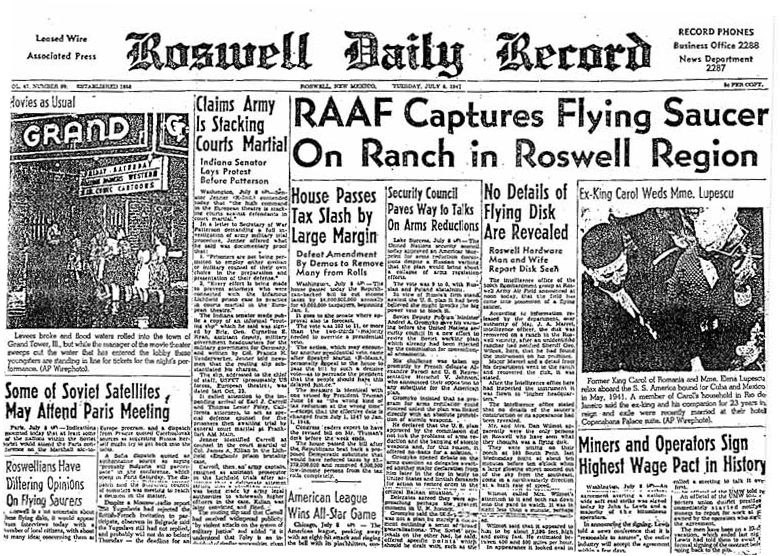 What Happened at Roswell, the Birthplace of the Flying Saucer Legend?

• On July 7, 1947, when ranch worker William Brazel, discovered unusual debris 75 miles north of the town of Roswell, New Mexico, he wouldn’t have believed that this would be the first incident in a long sequence of events, spanning over seven decades, to form a rich and mysterious conspiracy theory that continues to fascinate and bewilder UFO theorists today. The ‘Roswell Incident,’ as it has now come to be called, provided to many the proof of extraterrestrial visitation and spawned a cultural movement.

• In 1947, stories of ‘flying discs’ or ‘flying saucers’ had already been circulating in the national press. So when Brazel discovered the debris, did the previous news of flying saucers lead him to believe that this may have been of an extraterrestrial origin? Brazel informed Roswell’s sheriff, who, in turn contacted Colonel William Blanchard, the commanding officer of the Roswell Army Air Field. The following day saw the RAAF issue a shocking press release confirming that a “flying disk” had, indeed, crashed at a ranch near the town of Roswell.

• As scientists arrived to the area, a press conference was hastily put together to explain that debris tinfoil, sticks and rubber strips was no more than that from a fallen weather balloon. The Roswell Daily Record newspaper which initially claimed that the debris came from a UFO, corrected their story to fit the RAAF’s weather balloon narrative.

• The incident faded from the news until 1980 when authors Charles Berlitz and William Moore published a book called The Roswell Incident. This book alleged that the weather balloon story was nothing more than a cover-up. Then in 1994, the US Air Force released a report claiming that the debris actually came from a spy device designed to fly at high-altitudes over the former USSR to detect sound waves, called Project Mogul, with the purpose of monitoring the Soviet Union’s efforts to develop an atomic bomb.

• But the USAF report did not address the eyewitness accounts of bodies seen at the crash site. So a follow up report was drawn up in 1997 to debunk the theory that alien corpses were discovered and transported by the US government to a top secret facility, saying that the figures were merely parachute test-dummies.

• To many, the reaction of the US government remains suspicious. Some have contended that, in attempting to originally claim one version of events, and then immediately backtrack on it, the government’s response had the unintended effect of attracting even greater attention to, not just the incident, but the covert operation as well.

• Roswell has since become the unofficial UFO capital of the world, and houses the International UFO Museum and Research Center. Since 1996, Roswell has also been the home of an annual UFO festival that sees thousands of tourists congregate at the little town to conduct scientific experiments, workshops and seminars, perform plays, experience its planetarium and even dissect fake alien corpses as part of the spectacle.

The little town of Roswell, New Mexico has been made famous for an incident that took place in 1947 that several conspiracy theorists maintain was

When ranch worker William Brazel, discovered what he thought to be unusual debris 75 miles north of the little town of Roswell, New Mexico, on that fateful day of July 7, 1947, he wouldn’t have, in his wildest dreams, believed that his was to be the first incident, in a long sequence of events, spanning over seven decades, forming a rich and mysterious conspiracy theory that continues to fascinate and bewilder UFO theorists even today. The ‘Roswell Incident,’ as it has now come to be called, has spawned a cultural movement, that has defied both, reason and time.

A whole host of conspiracy theories have made their way into the mainstream over the last few decades, and, it appears that we may never actually learn the full truth, amid all the cacophony. Nevertheless, some facts of the tale remain undisputed beginning with Brazel’s discovery.

Stories of ‘flying discs’ or ‘flying saucers’ had already been circulating in the national press that year, and, perhaps, these may have been what led Brazel to believe that the tinfoil, sticks and rubber strips he uncovered, may have had extraterrestrial origins. He soon informed Roswell’s sheriff of his discovery, who, in turn, contacted Colonel William Blanchard, the commanding officer of the Roswell Army Air Field (RAAF).