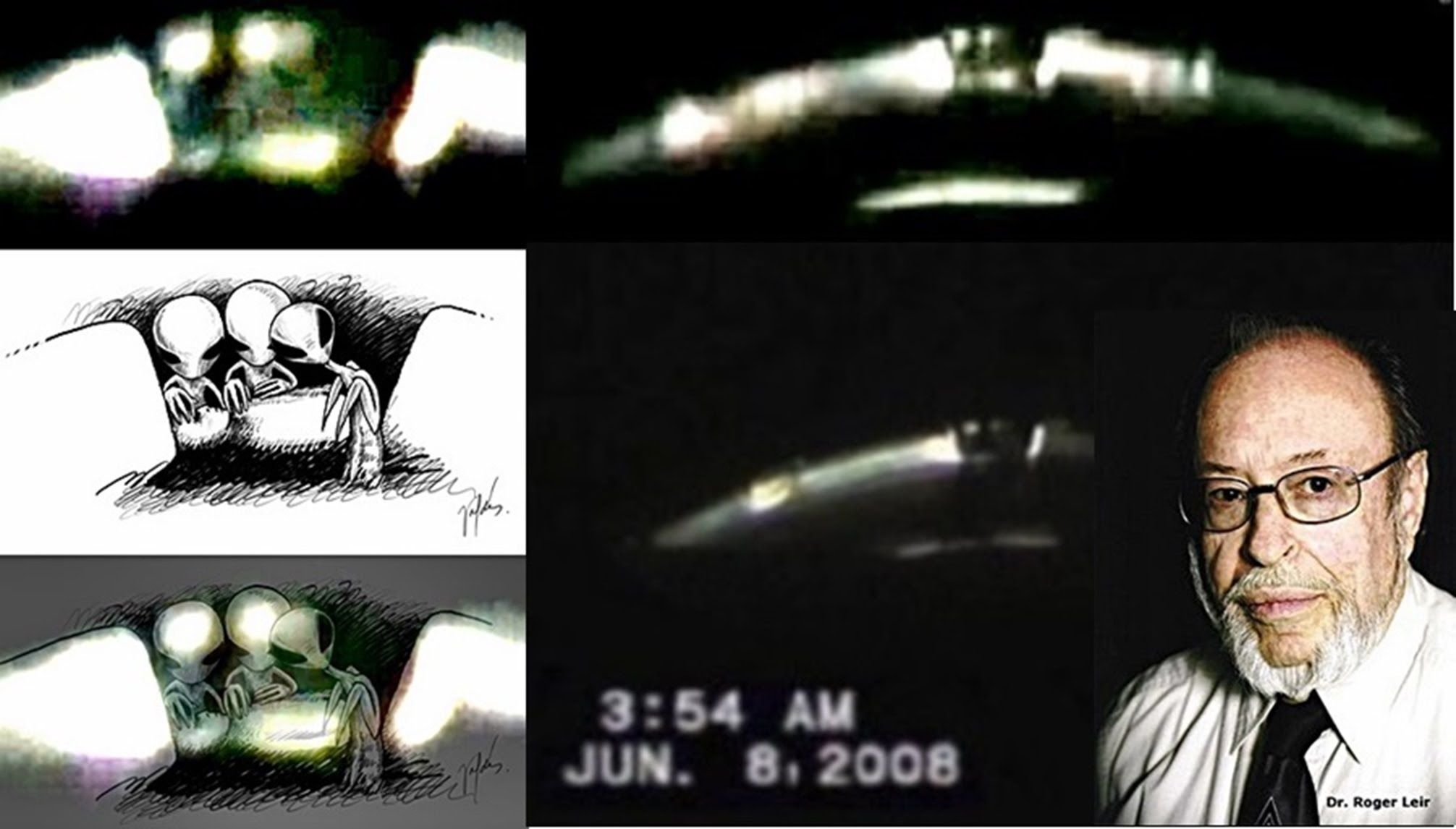 Verified UFO Footage With Two Beings Inside of the Craft: In the Videographer’s Own Words

• The video footage (see 6:45 minute video with three very cool video images of UFOs) comes from the late Dr. Roger Leir, a Doctor of Podiatric medicine who had performed more than fifteen surgeries that removed sixteen separate alien implants. In the video is what appears to be two beings inside of a UFO.

• Filmed by multiple film crews in Turkey, and witnessed by several local villagers, it is known as the Kumburgaz, Turkey UFO incident. It made headlines in Turkey, and the video was analyzed by the government-sponsored Scientific and Technology Research Board of Turkey which concluded and vouched for its authenticity.

• Paraphrasing Dr Lier’s quote below: ‘We’re standing on an elevated deck. The camera had a 300 mm lens and an electronic doubler, so we were able to close in on the object at 600 times magnification. After getting our focus on the moon, we moved the camera over to this little bright light and then started to zoom in on it. When we got probably three quarters of the way from magnification we see that this light is not a plane. It’s not a star and it’s not a helicopter. It has a cylindrical shape to the front. When it would turn you could see that it was probably crescent shaped. We closed on the front of the object and we couldn’t believe what we were seeing. In the viewing port of the craft was being lit by the moon. Through these ports was light emanating from the internal portion of the craft. And standing there in these portals were some of these beings. They knew we were there filming them it, was like “oh hello, go ahead film away.’

• Does it mean the footage below is real? No, but it might be one of the few authentic ones out there where occupants of these ‘UFOs’ are actually seen. It’s natural for humans to fear the unknown. But why don’t we question what’s happening in our world? Where is the line drawn between not being concerned and completely denying a reality? At what point does something become a reality?

I know, reading the title would instantly have a ‘non believer’ click the X button on the top righthand corner of the screen, and that’s fine, but the truth remains. And that truth is the fact that “there is very compelling evidence that we may not be alone.” Those are the words of Luis Elizondo, who is one member of the To The Stars Academy, a man with a long career within the U.S. Department of Defense, who recently retired from the Pentagon, and was a director of the “Ariel Threats Identification Program.”

Does it mean the footage below is real? No, but the source is interesting and myself as well as many other UFO researchers in the field, would tell you that it might be one of the few authentic ones out there where occupants of these ‘UFOs’ are seen. The US government has now released UFO footage, more on that below.

Through To The Stars, the U.S. government has been, and will continue to release footage they’ve collected over many years of UFOs that perform maneuvers which defy, as Elizondo states, our understanding of aerodynamics. They’ve released some pretty amazing ones so far that come with actual electrooptical data and radar tracking reports. Keep in mind, as stressed by Elizondo and various documents that’ve been released prior to this disclosure, that military encounters with UFOs have occurred many times. There are many examples and reports to choose from and I recently wrote an article about an incident which occurred with the Chilean Air Force.

What’s interesting about the recent mainstream coverage is that they released actual video footage and to be honest, it’s quite discouraging that UFO footage has to be released by the U.S. government in order for it to be considered ‘real.’ Sure, there are still many out here who are going to call it fake, which means one thing, there are a group of defense officials making fake videos, putting them out in the public, and saying they’re real or, it’s actual authentic footage.

To contemplate the first one is just as intriguing to contemplate the second, but in my mind, there is no doubt that these are indeed real, and we don’t need these videos to come out to prove that.

The story as to what they are, however, will most likely be controlled by some ‘powerful people’ who oversee governments. Who knows what spin they will put on it via mainstream media, but right now we are currently seeing ‘official disclosure.’

This is the first time we’ve seen media ‘owned by the establishment’ present the UFO topic in a credible way, which is peculiar for multiple reasons. They told the truth, yet there still seems to be some misinformation with regards to the materials that have been collected in association with these UFOs, as pointed out by the New York Times.

This is why the footage below is also intriguing. Elizondo admitted that this type of thing has happened thousands of times and the ‘unofficial’ reports and sightings from citizens of the world have never been considered credible, when some of them very well could be. But we didn’t need Elizondo, again, we’ve had evidence, and even physical evidence of these crafts for a long time.

Whether or not they are alien is a completely different question and discussion.

The footage below comes from Dr. Roger Leir, a Doctor of Podiatric medicine, and arguably the best known individual with regards to extracting alleged alien implants. He has performed more than fifteen surgeries that removed sixteen separate distinct objects. These objects have been investigated by several prestigious laboratories, including Los Alamos National Laboratories, New Mexico Tech, and many others. Unfortunately, he passed away in March 2014, but his legacy lives on.

In the film below, you will see what appears to be two beings inside of a UFO. Filmed by multiple film crews in Turkey, it made headlines there. It’s known as the Kum¬burgaz, Turkey UFO incident, and involves several witnesses who live in the local village. The video was ana¬lyzed by the Sci¬en¬tific and Tech¬nol¬ogy Research Board of Turkey (which is sponsored by the gov¬ern¬ment). They concluded and vouched for its authenticity.

In conclusion, even though a detailed analysis of the footage is conducted, it might still remain unidentified. Hence, other reference objects need to be recorded in the same frame with the disputable object and further shootings need to be done by ourselves with special equipment in the same location and conditions.

Accordingly, the term “UFO” (Unidentified Flying Object) which has been used for these sort of dubious objects can also be used for these objects. But, this definition does not mean that these objects are from extraterrestrial (flying saucer etc.) origin.

The incidents were dramatic. Apparently, for several days disc, metallic spheres, round, and oval shaped unknown craft visited the Sea of Mar¬mara just off the coast of Kum¬burgaz, Turkey.

It also so happens that Dr. Lier was there as well and had a powerful camera on hand. Below is a snippet from one of many interviews he’s given describing the experience, “We’re standing on an elevated deck, which has nothing between us and the water. It was a rather warm night and there was a very very bright full moon. The camera we were using had a 300 mm lens and an electronic doubler. In other words we were able to push or close in on the object 600 times magnification. We started by looking at the moon… the moon was very bright and under these circumstances it’s just the absolute worst time to look for UFOs because the light from the moon pollutes the surrounding sky it’s like, you know, trying to film something at night in the sky in the middle of the city…But anyway…We saw a little bright dot to the left and below the moon and then after getting our focus on the moon we moved the camera over to this little bright light and then started to zoom in on it… and when we got probably 3 quarters of the way from magnification and we’re looking through the view finder and we’re also recording this on the monitor, we see that this light is not a plane. It’s not from a star, it’s not a helicopter, it has a shape to it, which was cylindrical in the front, and then it would turn time to time and you could see that it was probably crescent shaped…And as we pushed on what we considered the front of the object, now that’s when we were so startled by…we just couldn’t believe what we were seeing…This was a craft that had, whatever you choose to call it…Viewing ports, windows, whatever, three, one big one in the front and one towards each side and the craft externally was being lit by the moon…So you could see that it was a shiny… sort of metallic material. What you could see through these ports was light that was emanating from the internal portion of the craft and standing there in these portals were some of these beings….They knew we were there filming them it, was like “oh hello, go ahead film away.” (Interview with Dr. Lier)