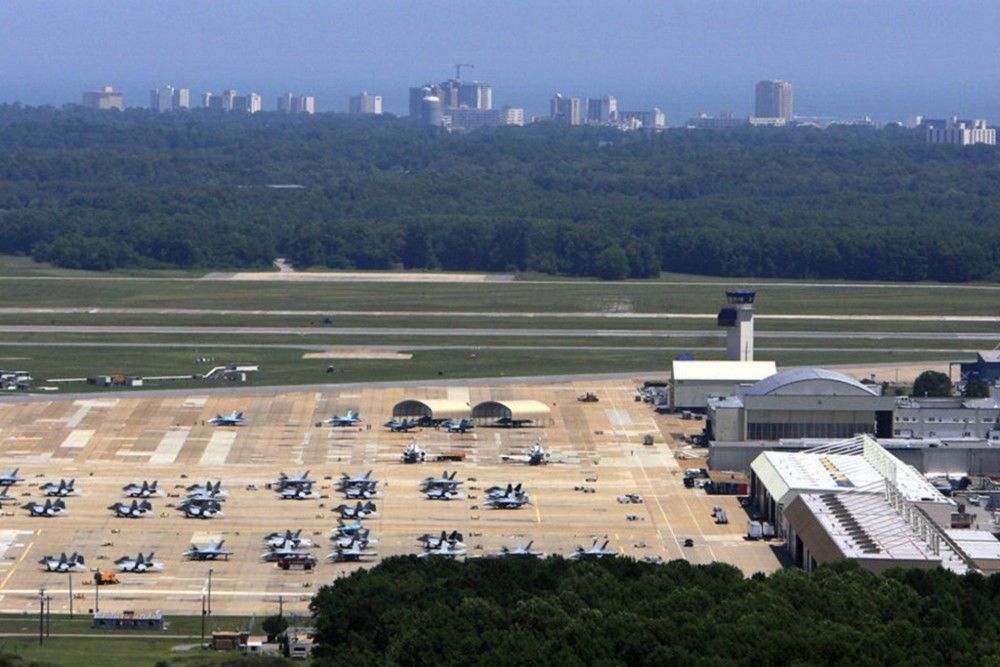 • Lee Adams is a retired 14 year veteran of the US Navy. He served as a supply officer on the USS Nimitz between 2012-2015, so he wasn’t there in 2004 when the Nimitz encountered a ‘tic tac’ UFO off of San Diego. But before he was assigned to the Nimitz he did have a strange encounter in Virginia Beach, Virginia when he was stationed at the Master Jet Base Oceana (pictured above).

• Talking with ‘Mike and Maurice’s Mind Escape’ podcast last July (see video below), Adams said a group of pilots were watching a mysterious plane fly over the jet base and disappear over the tree line, landed outside of the base behind the trees (in the pitch dark at 2:00 am). They mentioned this to Adams. Then Adams looked up and was amazed to see a gigantic two-mile-wide, shimmering and translucent UFO floating over the base. Adams described it as looking like a jellyfish or a clear trash bag, hovering but having “defined attributes”. (Adams said that 15 people saw it, but they made no official report on it.)

• Adams doesn’t think that it was necessarily an extraterrestrial craft. But it definitely wasn’t gas or a cloud. Said Adams, “I think that the government knows about it – why would it be right next to a military base?” “The military would know.” (Adams says that no one told them not to say anything about the incident, “[But] nobody cared. We’ve got real stuff to worry about… I’ve got a life to live.”)

A US Navy veteran who served on the famous USS Nimitz has revealed how he once spotted a gigantic two-mile-wide UFO hovering over a military base.

The aircraft carrier became a household name in 2017 after incredible footage of a UFO being chased by fighter pilots from the ship was leaked online.

It sparked a huge number of US Navy pilots to come forward with their encounters, including Lee Adams.

Lee served as a supply officer on the USS Nimitz between 2012-2015, eight years after the infamous tic-tac incident.

And, while he never witnessed the UFO on that day off the coast San Diego, he did see perhaps an even more staggering “craft”.

The veteran was stationed at a military base in Virginia Beach, Virginia, US, when a group of pilots spotted a mysterious plane flying over the area before disappearing into the trees.

Speaking to Mike and Maurice’s Mind Escape podcast earlier this year, he said: “I look up and it’s like a giant trash bag floating over the base.
“If you could imagine a trash bag that’s two miles in diameter floating, translucent.

“It was shimmering in the sky, two miles in diameter.”