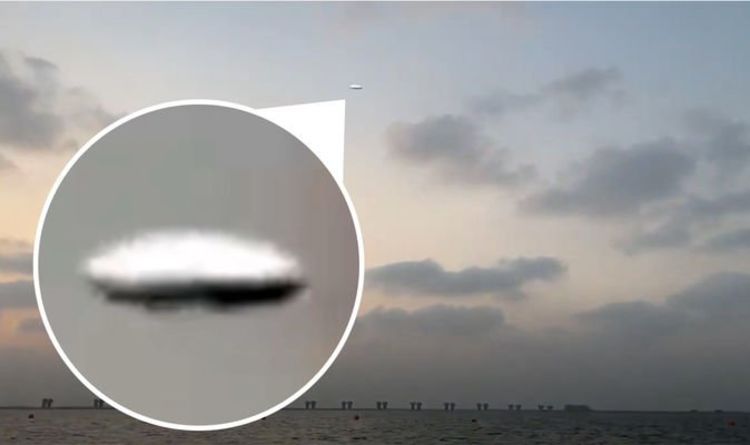 • On August 25th, Jovic Alamons’ wife was video recording him walking along Ja Beach in Dubai, United Arab Emirates when he points to a classic ‘flying saucer’-shaped object hovering in the sky in front of them. (see video clip below) The UFO appears to be the size of a 747 jet at about one mile in the distance. Rotation can be seen underneath the craft. Unfortunately, Mrs Alamons stopped recording before the UFO could fly away.

• Was the craft waiting for water to evaporate from its hull, after emerging from the water, before flying off into space?

Eagle-eyed alien life conspiracy theorists believe they have acquired video evidence of a UFO brazenly hovering over Earth. What appears as a classic ‘flying saucer’-shaped object is seen flying low in the sky close to the United Arab Emirates city.

The bizarre footage was originally uploaded to YouTube by the UFO & Alien Santana channel, apparently shot by the wife of eyewitness Jovic Alamons.
Self-proclaimed alien researcher Scott Waring believes the video shot in daylight really is proof of UFOs.

Waring took to his UFO Sightings Daily blog to speculate about the anomaly.

He claimed: “Watching this video makes you wonder if its real or not, but the man’s reaction and how he and the woman are transfixed on recording the guy – all is normal.

“I looked for glitches and could find no evidence of manipulation in the video.

“It’s sitting over the ocean off Dubai.”