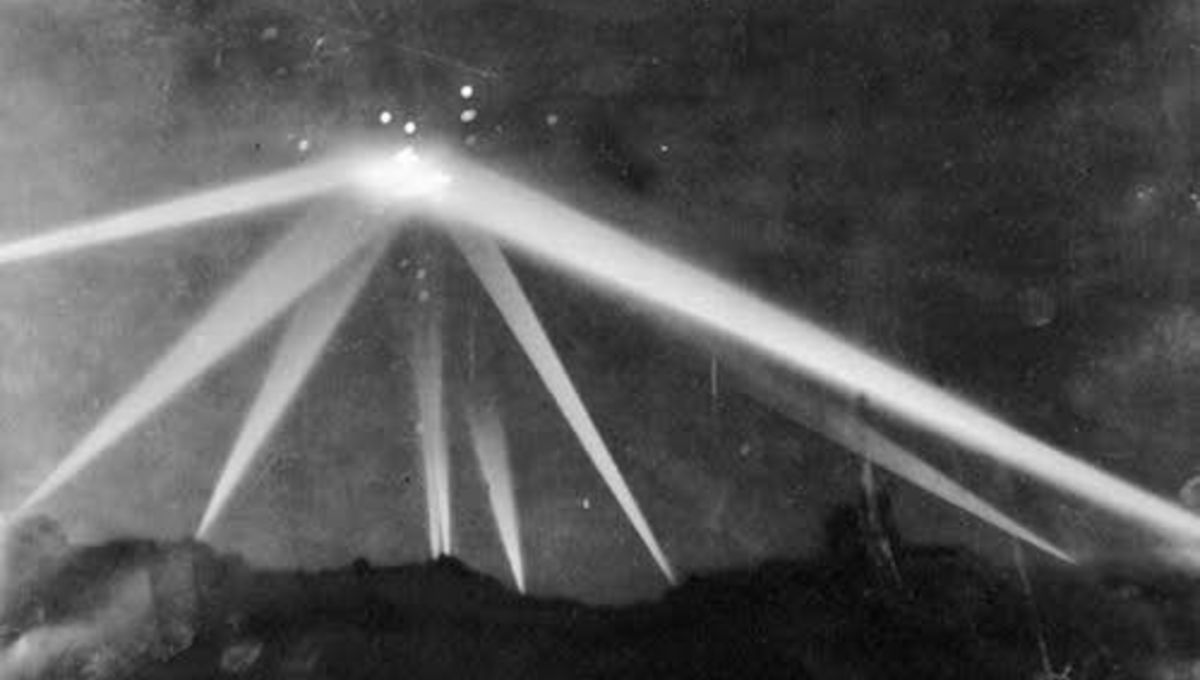 • Early in the morning of February 25th, 1942, a large unidentified object hovered over Los Angeles. While sirens blared and searchlights pierced the sky, 1400 anti-aircraft shells were pumped into the air as citizens cowered and marveled below. One female air warden said, “[I]t was practically right over my house. I had never seen anything like it in my life!” Were these flying saucers that had come to destroy LA?

• Eye-witnesses swore that it certainly was not a plane or a balloon. But the official explanation was that the UFO was two weather balloons released by the Douglas Aircraft Plant in Santa Monica, and from the Sawtelle Veterans Hospital in Westwood. Jittery soldiers, already on high alert due to the recent attack on Pearl Harbor, panicked – and the rest is conspiracy theory history.

• According the LA Times, on February 23rd, 1942, ‘a Japanese submarine surfaced …near Santa Barbara, and pumped 13 rounds of 5 ½ inch shells at oil installations. Minor damage was done to piers and oil wells, but the raider missed a gasoline plant, apparently its actual target.’ A panicked Los Angeles awoke on February 24th to photos of the damage, and news that the enemy submarine was nowhere to be found. That evening, the Navy received word of yet another imminent attack.

• In the early morning hours of February 25th, air raid defense radar tracked an unidentified object approximately 100 miles from LA. Radio silence was ordered and searchlights were trained on the sky. A little after 3 am, a “balloon-like” object appeared over Culver City and Santa Monica. Minutes later, the artillery shelling began. Around 12,000 volunteer air raid wardens took their positions patrolling the streets as shrapnel from the shells rained down on LA.

• People claimed to see many different things — from a blimp to more than 50 planes. Bill Birnes, publisher of UFO Magazine, told PR Newswire in 2011 that these UFOs were flying too high to be Japanese bombers. Apparently, not a single artillery shell was able to hit the UFO craft. But most of the danger lay on the ground below where shrapnel rained down. A shipyard worker recalled that as the night shift was leaving and the morning shift was arriving, everyone was collecting the shrapnel that was scattered all around. One witness said, “[S]hrapnel-strewn areas took on the appearance of a huge Easter-egg hunt, [as] youngsters and grownups alike scrambled through streets and vacant lots, picking up and proudly comparing chunks of shrapnel fragments.”

• Up to six people died that morning, some in car accidents and others from heart attacks. Many volunteer wardens were injured by falling shells. And numerous Japanese Americans were arrested for “signaling” to the invaders.

• The next day, the LA Times reported “foreign aircraft flying both large formations and singly flew over Southern California early today and drew heavy barrages of anti-aircraft fire — the first ever to sound over United States continental soil against an enemy invader,” along with a heavily doctored photo of searchlights shining on the unidentified object flying over the city (shown above).

• To make matters more confusing, the Army Chief of Staff initially said there were 15 enemy aircraft over LA, while the Navy said it was just a false alarm. The Navy blamed the Army for being over-eager to shoot at the sky. In response, on February 27th, the LA Times printed an editorial stating: “This Is No Time For Squabbling.”

• There also may have been a cover-up to save officials from the embarrassment of fighting a weather balloon. One soldier recalled being told “there had been seven Japanese planes up there.” He stated, “I was also told that if I repeated my story about shooting at a balloon and not enemy planes, I would be put behind bars.”

• In 1975, LA Times aerospace editor Marvin Miles wrote a memo on the LA incident, relying on the US governments ‘official version’ of events. After the war, it was established that the Japanese had sent no planes to LA during the war. Meteorological balloons known to have been released over Los Angeles may well have caused the initial alarm. Anti-aircraft artillery units were officially criticized for having wasted ammunition on targets which moved too slowly to be airplanes.

• But in the 1970’s and 80’s, the conspiracy theories that the ‘Battle of LA’ was due to extraterrestrial UFOs hovering over the city began to emerge. The theory gained traction in 1987 when some Majestic 12 documents were released, including the ‘Marshall/ Roosevelt Memo of March 5, 1942’, claiming that two alien aircraft had been recovered after the incident. The memo goes on to say, “This Headquarters has come to a determination that the mystery airplanes are in fact not earthly and according to secret intelligence sources they are in all probability of interplanetary origin.”

• Skeptoid podcast host Brian Dunning writes, “For more than 40 years, not a single person associated with the Battle of Los Angeles entertained any thoughts about extraterrestrial spacecraft or aliens. … The alien spacecraft angle is purely a post-hoc invention by modern promoters of UFO mythology.”

• But the truth behind the Battle of Los Angeles is probably more about human fallibility — bad intel, errant weather balloons and poor training — than anything else. However, the records are so muddled that the true story of The Great Air Raid will forever be fodder for those with conspiratorial minds.

• [Editor’s Note]  The “large UFO” hovering over Los Angeles in February 1942 was actually a cluster of UFOs, each surrounded by a shimmering force field which together looked like one big balloon. However, as noted, two UFO saucers were indeed shot down. One was recovered by the Navy in the Pacific Ocean. The other crashed inland in the San Bernardino Mountains east of LA and was recovered by the Army. Both were taken to Wright Patterson Airfield in Ohio where it was determined that these were unmanned drone craft, not from this planet.  Dr Michael Salla discusses the 1942 LA incident at length in his 2017 book, The US Navy’s Secret Space Program and Nordic Extraterrestrial Alliance.

It was the early morning of Feb. 25, 1942. A large unidentified object hovered over a Pearl Harbour-rattled Los Angeles, while sirens blared and searchlights pierced the sky. One thousand and four hundred anti-aircraft shells were pumped into the air as Angelenos cowered and marveled. “It was huge! It was just enormous!” one female air warden allegedly claimed. “And it was practically right over my house. I had never seen anything like it in my life!”

But that wasn’t all. Some Angelenos claimed there were more strange objects in the sky that night, namely dozens of airplanes — or was it flying saucers? — that had come to destroy L.A.

“The obvious thought was that these were Japanese bombers come to attack the United States,” UFO expert Bill Birnes, publisher of UFO Magazine, told PR Newswire in 2011. “But it wasn’t. They were flying too high. And the astounding thing was not one artillery shell could hit the craft — out of all the hundreds of shells that were fired. People outside that night swore that it was neither a plane nor a balloon — it was a UFO. It floated, it glided. And to this day, nobody can explain what that craft was, why our anti-aircraft guns couldn’t hit it — it’s a mystery that’s never been resolved.”

That night, befuddled officials would only help the urban legend grow. Many officials now believe two weather balloons released by the 203rd Coast Artillery Regiment from the Douglas Aircraft Plant in Santa Monica and the Sawtelle Veterans Hospital in Westwood may be responsible for the ensuing chaos. Jittery soldiers already on high alert in the early days of World War II panicked and the rest is conspiracy theory history.

All of the pieces were in place, according to the LA Times, “for the confused action known as the ‘battle of Los Angeles.’”
“People outside that night swore that it was neither a plane nor a balloon — it was a UFO. It floated, it glided. And to this day, nobody can explain what that craft was, why our anti-aircraft guns couldn’t hit it — it’s a mystery that’s never been resolved.”

The city was on high alert following the attack on Pearl Harbor on Dec. 7, 1941. Rumors of an imminent Japanese invasion were constant.

According to Terrenz Sword, author of The Battle of Los Angeles 1942: The Mystery Air Raid, during one incident, the Navy reportedly received a tip that there were more than 30 enemy ships off the coast. Army pilots took off to find them — only to discover they were nothing more than fishing boats.

Southern California’s worst fears were realized on the night of Feb. 23, 1942. The LA Times described the scene 20 years later:
As President Roosevelt warned a nation-wide radio audience that the oceans “have become endless battlefields on which we are constantly being challenged by our enemies,” a Japanese submarine, I-17, surfaced off-shore at Ellwood, near Santa Barbara, and pumped 13 rounds of 5 ½ in shells at oil installations. Minor damage was done to piers and oil wells, but the raider missed a gasoline plant, apparently its actual target.

A panicked Los Angeles awoke on Feb. 24 to photos of the damage from the shells and news that the enemy submarine was nowhere to be found. That evening, the Navy received word of another imminent attack. In the early morning hours of Feb. 25, air raid defense radar tracked an unidentified object approximately 100 miles from L.A. At 2:25 a.m., air raid sirens blasted. Shortly after, radio silence was ordered and searchlights began to pierce the sky. A little after 3 a.m., a balloon-like object appeared in the sky over Culver City and Santa Monica — the same one that people would later call UFOs or a mysterious aircraft.