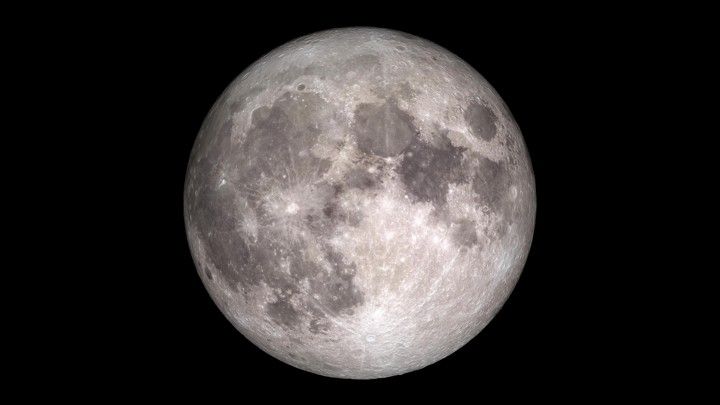 • For decades, some very credible sources have been saying that our Moon is not what we think it is, and that there’s also some type of extraterrestrial presence on the Moon.

• Shortly before his death in 2007 at age 89, USAF Colonel Ross Dedrickson who was responsible for maintaining the inventory of the nuclear weapon stockpile for the United States during the 1960’s, revealed that in 1959 the US tried to detonate atomic weapons on the Moon for scientific purposes. This “Project A119” was halted by extraterrestrials who would not allow us to detonate any nuclear weapons in space.

• Dr. Horace Crater, a physicist from the University of Tennessee Space Institute, recently published a paper in the Journal of Space Exploration that identified certain features that appear inside the crater Paracelsus Con the far side of the Moon. The research paper suggests that these features might be artificial in origin, meaning someone other than a human being built them and put them there.

• The Deputy Manager for the Clementine Mission to the Moon in 1995 said it was really a photo reconnaissance mission to check out structures on the far side of the Moon that weren’t put there by humans.

• Ingo Swann and other remote viewers under the government’s Stargate Program reported viewing strange structures and humanoid creatures on the Moon.

• A 2014 paper by Sean C. Solomon, the director of the Lamont-Doherty Earth Observatory of Columbia University, relates how after decades of data, they still have no idea about the moons inner core and what it’s comprised of. In his book, Our Occulted History, the late great Jim Marrs had a thing or two to say about Mars. “Studies of moon rocks indicate that the moon’s interior differs from the Earth’s mantle in ways suggesting a very small core or none at all. A 1962 study found the interior of the moon to be less dense that the exterior.”

• Marrs sheds more light on the hollow Moon in Our Occulted History: “The most startling evidence that the moon could be hollow came on November 20, 1969, when the Apollo 12 crew, after returning to their command ship, sent the lunar module ascent stage crashing back onto the moon… The LM struck the surface about forty miles from the Apollo 12 landing site, where super sensitive seismic equipment recorded… [that] the moon reverberated like a bell for more than an hour. Frank Press of MIT stated, “[I]t is quite an extraordinary event. That this rather small impact… produced a signal which lasted 30 minutes is quite beyond the range of our experience.”

• According to Isaac Asimov, an American writer and professor of biochemistry at Boston University, “[The Moon] is too big to have been captured by the Earth. The chances of such a capture having been effected and the Moon then having taken up nearly circular orbit around our Earth are too small to make such an eventuality credible…. [T]he Moon, by rights, ought not to be there.” NASA scientist Robin Brett said,“It’s easier to explain the non-existence for the Moon, than it’s existence.” And Harvard Astrophysicist Irwin Shapiro said, “The best explanation for the Moon is observational error – the Moon doesn’t exist.”

• “[I]t is extremely unlikely that any object would just stumble into the right combination of factors required to stay in orbit. ‘Something’ had to put the moon at its altitude, on its course and at its speed. The question is: what was that ‘something?” – Jim Marrs

• There is actually a considerable amount of evidence that points towards something suspicious happening on the Moon. In 1970, members of the Soviet Academy of Sciences published an article titled, “Is the Moon the Creation of Alien Intelligence?” As Marrs points out, “This circular orbit is especially odd, considering that the moon’s center of mass lies more than a mile closer to the Earth than its geometric center. This fact alone should produce an unstable, wobbly orbit, much as a ball with its mass off-center will not roll in a straight line.”

• In the late 1960’s, William Kenneth Harmann of the Planetary Science Institute proposed that the Moon resulted from a collision between Earth and another body at least the size of Mars. This became known as the ‘Big Whack’ theory, and it correlated to the story told in ancient Sumerian tablets. The Sumarians wrote about a large watery world called Tiamat that was in orbit between Mars and Jupiter 4 billion years ago. The rogue planet, Nibiru, caused Tiamat to split in half. The larger half became the Earth, the smaller became the Moon.

• “There is no astronomical reason why the Moon and the sun should fit so well. It is the sheerest of coincidences, and only the Earth among all the planets is blessed in this fashion.” – Isaac Asimov

Controversy has surrounded the Moon for a very long time, we have leaks, research, and information from some very credible sources who have, over a span of decades, been relaying to the public that our Moon is not what we think it is, and that there’s also some type of extraterrestrial presence on the Moon.

One example would be the testimony of Colonel Ross Dedrickson, who was responsible for maintaining the inventory of the nuclear weapon stockpile for the United States, he had a long stint with the US Atomic Energy Commission.

Shortly before his passing, Dedrickson told the world that the US tried to detonate atomic weapons on the Moon for scientific purposes, measurements, and whatnot and that this project was halted by extraterrestrials, who would not allow us to detonate any nuclear weapons in space. These were some interesting comments because he is one of the hundreds of high ranking military people who have alluded to such things, and we also have a declassified report by the Air Force Nuclear Weapons Center from June 1959 that shows how seriously they were considering the plan, the report is called Project A119.

We know for a fact that the US wanted to investigate the capability of weapons in space, and if they did, we also know that we would never be told, similar to the testing that goes on here on planet Earth.

Then, we have remote viewers from the STARGATE program who have ‘seen’ strange structures and humanoid creatures on the Moon, like Ingo Swann (from his book, titled Penetration), for example. He wasn’t the only one from the program who did, I have personally had conversations with Dr. Paul Smith, a retired army veteran who spent a decade in that program, he also relayed to me that something strange is happening on the Moon. Many from within that program have been very outspoken about an extraterrestrial presence.

Multiple whistleblowers have also spoken of strange structures on the Moon, and it’s become so obvious that some academicians are trying to do what they can to bring attention to it. For example, a recently published paper in the Journal of Space Exploration about certain features on the far side of the Moon that appear in the crater Paracelsus C. Titled “Image Analysis of Unusual Structures on the Far Side of the Moon in the Crater Paracelsus C,” argues that these features might be artificial in origin, meaning someone other than a human being built them and put them there.

It’s not just the Moon, a physicist from the University of Tennessee Space Institute, Dr. Horace Crater, recently published a paper in The Journal of Space Exploration that, along with the NASA Viking images, hints “strongly at artificial surface interventions.”

The list is long, and the idea that somebody else is on the moon is nothing new, even the Deputy Manager for the Clementine Mission to the moon in 1995 said it was really a photo reconnaissance mission to check out structures on the far side of the Moon that wasn’t put there by humans.

But this article is not about what’s on the moon, it’s about what exactly the Moon is.

It’s also noteworthy to mention that the United States has been criticized by Russia for concealing artifacts they collected from the Moon.