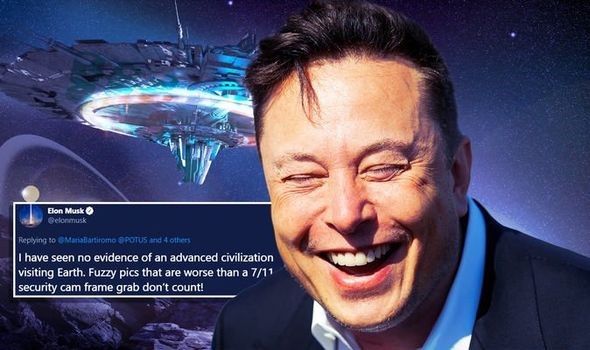 • Fox News anchor Maria Bartiromo recently asked President Trump if there are UFOs, seeing that the Pentagon has set up a UFO/UAP Task Force. Trump said: “Well I’m gonna have to check on that, I mean I’ve heard that, I heard that two days ago, so I’ll check on that. I’ll take a good, strong look at that.”

• Bartiromo then tweeted a thanks to the President, and tagged Elon Musk (pictured above) and Jeff Bezos in the tweet: “Thx @POTUS @realDonaldTrump will f/u on this. Humans want to know. Has earth been visited. @elonmusk & @JeffBezos as earth great space explorers, what do U think? Have we been visited. We will discuss tomorrow @MorningsMaria @FoxBusiness 8a.” “Earth great explorers” refers to Musk’s ownership of SpaceX and Bezos’ ownership of Blue Origin, two leading spacecraft manufacturers and operators.

• “I have seen no evidence of an advanced civilization visiting Earth,” Elon Musk replied in a tweet. “Fuzzy pics that are worse than a 7/11 security cam frame grab don’t count!” “[T]here are literally >1000 percent more cameras than 10 years ago, but still zero clear photos.”

• Musk, 49, is no stranger to controversy. In July this year, he warned that artificial intelligence threatens to overtake humanity “in less than five years”. He was also among 28 people who in 2015 signed a statement warning against “intentionally signaling other civilizations in the Milky Way”. The document, published by the Berkeley SETI Research Center at the University of California, Berkeley, was in response to SETI’s sister program, METI (Messaging Extraterrestrial Intelligence) actively calling out to beings in space, not just listening and observing.

• The SETI statement reads in part: “We know nothing of ETI’s (extraterrestrial Intelligence) intentions and capabilities, and it is impossible to predict whether ETI will be benign or hostile. …[I]t is likely that other communicative civilizations we encounter will be millions of years more advanced than us. …As a newly emerging technological species, it is prudent to listen before we shout. …Intentionally signaling other civilizations in the Milky Way Galaxy raises concerns from all the people of Earth, about both the message and the consequences of contact.”

• [Editor’s Note]   What is more plausible? That Elon Musk travels among the world’s super-elite but has never heard about the multitude of intelligent extraterrestrial beings that have been working with the military industrial complex since the 1950s; or that Musk is a puppet of the deep state and is doing what he is told? Let’s take a closer look. Musk didn’t really say there are ‘no ETs’, just that he’s seen “no evidence” of them. This is the standard lie that the deep state has been propagating since the inception of the CIA right after the Roswell UFO crash and cover-up in 1947. This also gives Musk some wiggle room if he’s ever cornered about lying. He’s covering his bases.
Then Musk arrogantly repeats another standard deep state lie – that there are no good images or video of UFOs. Actually, there is a TON of good images and video of UFOs. (see recent ExoArticle about the 1990 Calvine UFO incident in the Scottish highlands where the photos were so good that the British government has refused to released them until 2070.) But the deep state wants people to think there are no compelling photos.

Another deep state tactic is to keep people afraid of unknown hostile extraterrestrials. The Berkeley SETI Research Center and the University of California, Berkeley are well-known deep state institutions. The deep state created METI, just as they did SETI, and used it to instill fear in the minds of the public. Elon Musk was right in line to sign this SETI statement of hostile aliens, even though he claims not to believe in aliens.

Finally, Musk is at the forefront of alerting/alarming the public about artificial intelligence taking over the planet. These are all fear tactics that the deep state employs to convert the benign extraterrestrial presence into an extraterrestrial enemy, and that the people of Earth can only turn to the deep state to save them from this existential threat. This is simply a new manufactured threat to humanity, replacing the old “Cold War” threat which the deep state concocted in the 1940’s when they labeled the Soviet Union/Russia as the bogeyman.

SPACEX boss Elon Musk has shot down conspiracy theorists and UFO truthers, saying there is no convincing evidence alien extraterrestrials have ever visited our planet.

Elon Musk, 49, is no stranger to controversy and he has been responsible for some bizarre statements over the years. In July this year, he warned artificial intelligence threatens to overtake humanity “in less than five years”. He has also co-signed a document warning of the consequences of recklessly attempting to contact alien civilisations beyond our solar system.

And yet, it appears as though the South African tech mogul behind SpaceX and Tesla draws the line at one thing: reports of UFOs visiting our planet.

In a series of revealing tweets, Mr Musk shared exactly what he thinks about unverified sightings and “fuzzy pics” of supposed alien spacecraft.

His comments were prompted by Fox News anchor Maria Bartiromo asking the US President Donald Trump about reports the US Department of Defense has set up a UFO task force.

When asked outright if there are UFOs, President Trump said: “Well I’m gonna have to check on that, I mean I’ve heard that, I heard that two days ago, so I’ll check on that.

“I’ll take a good, strong look at that, but I will tell you this, we now have created a military the likes of which we have never had before.”
Ms Bartiromo then tweeted the President’s response to Mr Musk and Jeff Bezos, CEO of Amazon and Blue Origin.

She tweeted: “Thx @POTUS @realDonaldTrump will f/u on this. Humans want to know. Has earth been visited. @elonmusk & @JeffBezos as earth great space explorers, what do U think?