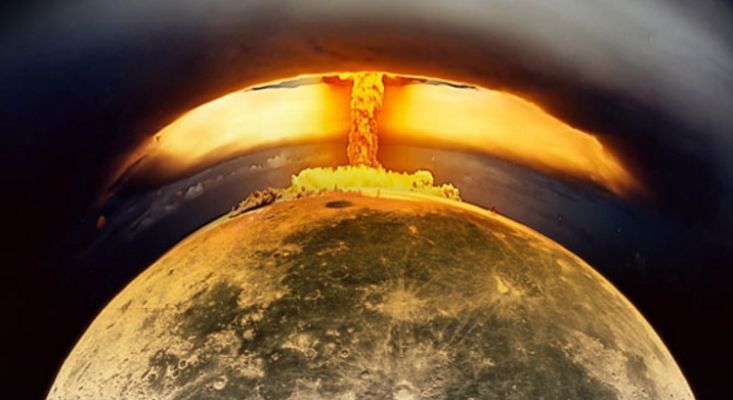 US Planned to Blow Up Moon, What Happened?

• At the dawn of the space race in the 1960s, a secret mission code-named ‘Project A119’ was devised by the US Air Force out of Kirtland Air Force Base in New Mexico to demonstrate to the Soviets and to the entire world that the U.S. could dominate space by exploding a bomb on Moon’s “terminator” – the area between the part of the surface that is illuminated by the Sun and the part that is dark. The military planned to add sodium to the bomb to make it glow and be highly visible to the naked eye from Earth. The plan was never carried out to avoid an “unparalleled scientific disaster.”

• This revelation is exposed in the unclassified Air Force document from 1959 entitled: ‘A Study of Lunar research Flights’, and in a new book by John Greenewald Jr. entitled: Secrets From the Black Vault: The Army’s Plan for a Military Base on the Moon and Other Declassified Documents that Rewrote History. Greenewald, who runs ‘The Black Vault’ website containing the largest civilian archive of declassified government documents, said, “A nuclear bomb on the surface of the Moon was definitely one of the stupider things the government could do.”

• Greenewald’s book also discloses the US military’s “Project Horizon”, in which the US Army planned to establish a permanent colony of 10 to 20 people on a Moon base by 1966. The plan was promoted in 1959 by the Chief of Research and Development for the U.S. Army, Lt General Arthur G. Trudeau, who claimed that if the U.S. could beat the Soviets to the Moon, “the prestige and psychological advantage to the nation will be invaluable.” They went so far as to design suits for the landing party and bulldozers for the construction. But the cost of the endeavor was estimated at over $6 billion annually (or $53 billion per year in today’s dollars), and was therefore shelved. Greenewald told the NY Post, “You look at these documents and wonder if this is what they’re telling us. Imagine what they’re not.”

• Today, NASA’s Exploration Technology Development Program is working on a plan to establish a permanent Moon base for scientists and astronauts. Also, Lewis Dartnell, a professor at the University of Westminster, has proposed a “Moontopia” city to be built inside massive hollow tubes formed by lunar volcanic eruptions.

• [Editor’s Note]   It appears that while the Army’s plan to establish a Moon base was publicly terminated, the military industrial complex revised their plan by creating a NASA space program to occupy the public’s imagination by hiring ex-Nazis to put Americans on the Moon using rocket technology, while secretly pursuing a ‘secret space program’ to explore and colonize space using advanced anti-gravity and electromagnetic/warp drive technology throughout the ensuing decades.

And according to SSP whistle-blowers, the Nazis did in fact build a lunar base within hollow volcanic tubes on the Moon in the early 1940s, which the American military industrial complex improved upon and expanded during the 1950s and 60s through a subsequent collaboration with the post-WWII Nazi remnant headquartered in Antarctic, along with their reptilian allies.

Blowing up the moon — this idea may look like a sci-fi movie plot, but it is a fact that the U.S. government made plans to explode a bomb on moon’s “terminator” — the area between the part of the surface that is illuminated by the sun and the part that is dark.

It was a secret mission code-named “Project A119.” The project was conceived at the dawn of the space race in the

1960s and designed to be monitored by a U.S. Air Force division located at Kirtland Air Force Base in New Mexico. All the details of this secret mission came to light in a recent report titled, A Study of Lunar Research Flights.

The Explosion of Moon

It is quite obvious that the plan did not work out. But if the U.S. had done, the explosion would have been visible from earth with naked eyes as the military had planned to add sodium to the bomb, which would make it glow and make it visible during the explosion.

John Greenewald Jr., author of the new book “Secrets From the Black Vault: The Army’s Plan for a Military Base on the Moon and Other Declassified Documents that Rewrote History” said, “A nuclear bomb on the surface of the moon was definitely one of the stupider things the government could do.”

The author also runs a website called The Black Vault, which is the largest civilian archive of declassified government documents including around 2.1 million pages. This webpage includes classified documents on assassinations and other phenomena legally obtained through Freedom of Information Act requests.

Greenewald wrote in his book that the U.S. Air Force devised the moon plot as they wanted to show the Soviets and the entire world that they can dominate space as well. Based on one such declassified document, he said that the plan was never carried out, most possibly due to the its potential to trigger an “unparalleled scientific disaster.”