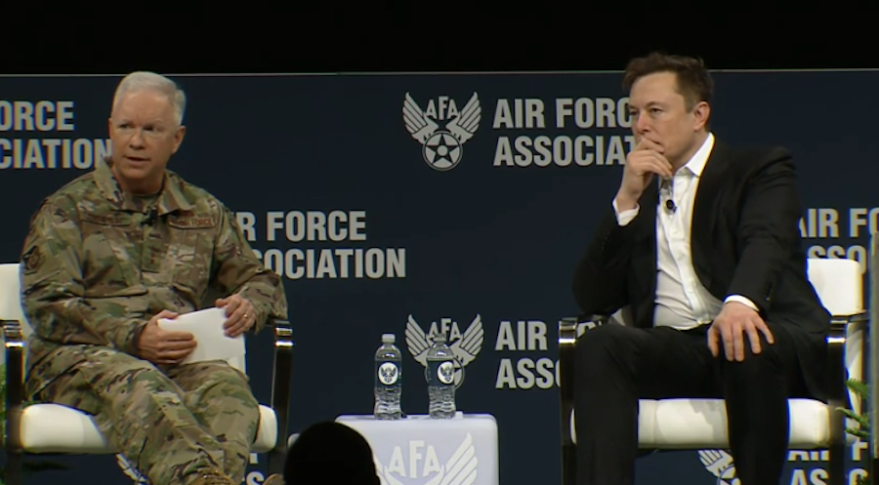 • On February 28th at the Air Force Association’s annual winter symposium in Orlando, Florida, SpaceX founder Elon Musk joined the commander of the Space Force’s Space and Missile Systems Center, Lt. Gen. John Thompson (both pictured above), for a “fireside chat”. “How do we make Starfleet real?” Musk asked the audience of US Air Force airmen who are now transitioning to the Space Force.

• Musk said that the future of air warfare is in autonomous drone warfare. “The fighter jet era has passed.” The ‘ticket to the future’, says Musk, is to make extensive use of reusable launch vehicles rather than expendable boosters. “I think we can go a long way to make Starfleet real and these utopian futures real.” Of course, Musk is referring to the type of rockets that his SpaceX company builds such as the Falcon 9 and Falcon Heavy rockets which are ‘partially reusable’, and the new Starship vehicle currently in development which is ‘fully reusable’.

• The military will test Musk’s reusable rockets for the first time with the upcoming Falcon 9 launch of a GPS satellite on April 29th. The Space and Missile Systems Center will allow SpaceX to attempt to land the booster on a droneship at sea.

• In 2018, SpaceX was turned down on a bid for a Launch Service Agreement contract that would help to fund the Starship’s development. The Air Force awarded LSA contracts to three other companies, prompting SpaceX to file a legal challenge that is still pending.

• Musk cast Starship as an example of “radical innovation” that will keep the United States in the lead as other nations like China advance their space capabilities. “I have zero doubt that if the United States does not create innovations in space, it will be second in space.” Musk says that Starship will enable access to deep space and the eventual colonization of Mars. He encouraged rival companies to start building fully reusable vehicles like Starship and create a more competitive industry. Musk suggested there should be more ‘disruptive competition’ in the defense industry.

• [Editor’s Note]  Musk strongly advocates “radical innovations” in space and “more disruptive competition in the defense industry” that will keep the United States in the lead as other nations like China advance their space capabilities. But what are these radical innovations? Eighty-year-old rocket technology. Apparently, the deep state military industrial complex wants to continue to hide its advanced exotic technologies, such as anti-gravity that the US Air Force uses in their advanced TR3B black triangle craft, and portable nuclear fusion reactor propulsion which the US Navy has publicly revealed in recent patent filings. (see ExoArticles here and here)

The deep state also wants to continue hiding the fact that the US military has deployed these technologically advanced spacecraft since the US Navy’s Solar Warden fleet in the 1980’s. Since then, these types of spacecraft have traversed not only the solar system, but the galaxy. Space travel within the solar system using these advanced propulsion technologies – not rockets- has become routine.

Who better to do the deep state’s bidding than the thoroughly compromised Elon Musk, who denies the existence of such advanced spacecraft and the presence of extraterrestrials? Musk isn’t interested in revealing the truth. Musk is only interested in the US government buying his revamped rocket technology to make himself a fortune.

ORLANDO, Fla. — In his first appearance at a military conference since the establishment of the U.S. Space Force, SpaceX founder Elon Musk gave his usual pitch on the virtues of reusable rockets. But he tailored the message to an audience of airmen who started their careers in the U.S. Air Force but are now transitioning to a new service and pondering the possibilities.

“How do we make Starfleet real?” Musk asked to roaring applause during a one-hour fireside chat with the commander of the Space Force’s Space and Missile Systems Center Lt. Gen. John Thompson Feb. 28 at the Air Force Association’s annual winter symposium.

Musk then answered his own question, insisting that reusable launch vehicles are “absolutely fundamental” to achieving whatever space ambitions the military might have, including staying ahead of China.

Many of Musk’s comments on reusable rockets were repeats of what he said at a previous appearance at an Air Force conference Nov. 5 in San Francisco, where he also sat down with Thompson.

On Friday, Musk made multiple references to the fictional Star Trek “Starfleet” to hammer the message that reusable rockets are the ticket to the future. “I think we can go a long way to make Starfleet real and these utopian futures real.”

But none of this can happen as long as the military continues to rely on expendable boosters, said Musk.