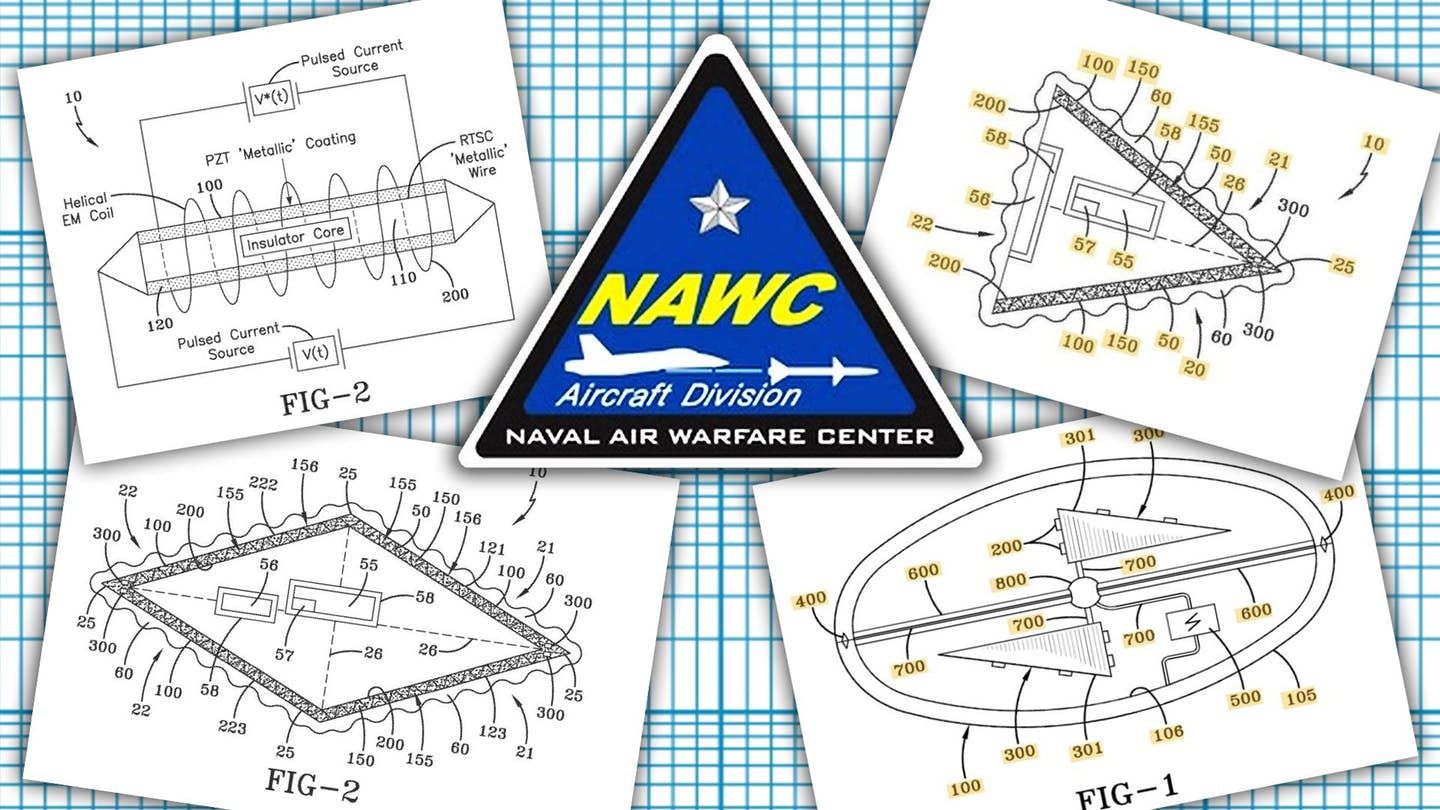 • In June it was reported that the US Navy had filed patent applications for seemingly implausible technologies, including a room temperature superconductor and a high-energy electromagnetic field generator. (see previous ExoArticle here)  ‘The Drive’ website has obtained documentation that states unequivocally that these technologies may in fact already be in operation.

• The application for the Navy’s most bizarre patent – a hybrid aerospace/underwater craft – describes the craft as utilizing the room temperature superconductor technology and high energy electromagnetic fields to enable its incredible speed and maneuverability. According to the patent application, the propulsion and maneuverability of the craft is due to an incredibly powerful electromagnetic field that essentially creates a quantum vacuum around itself , or a ‘force field’, that allows it to ignore aerodynamic or hydrodynamic forces, and thereby remove its own inertial mass from the equation.

• In January 2019, the patent’s inventor Salvatore Pais presented a conference paper to the American Institute of Aeronautics and Astronautics (AIAA) SciTech Forum in San Diego stating that the research for these technologies was funded by the Naval Innovative Science & Engineering Program. Pais, along with the Navy’s patent attorney, Mark O. Glut, and the U.S. Naval Aviation Enterprise’s Chief Technology Officer, Dr. James Sheehy, all assert that these inventions are not only enabled but operable, as required in order to successfully receive a patent. And in a June 6th telephone interview between Pais and the US Patent and Trademark Office (USPTO), Pais presented evidence that the high energy electromagnetic field generator was, in fact, currently operable.

• After the patent for a room temperature superconductor (RTSC) was initially rejected, Dr Sheehy personally vouched for its existence, declaring that the RTSC is “operable and enabled via the physics described in the patent application”. Navy patent attorney Glut blamed the patent examiner’s initial rejection of the RTSC on an adherence “to perceived mainstream science to indicate the concept was not possible”. By federal law, false statements to the USPTO are punishable by fine or imprisonment.

• If the Navy has indeed managed to develop operable room temperature superconductors and electromagnetic force fields, these technologies would revolutionize warfare in ways not seen in centuries, leading to a paradigm shift in civilian technology as well. A 2019 Nature article supports Pais and Sheehy by stating: “[E]xperimental data now confirm superconductivity at higher temperatures than ever before.” “[I]t seems more likely than ever that the dream of room-temperature superconductivity might be realized in the near future”

• However, Dr. Mark Gubrud, a University of North Carolina physicist, said that claims of the development of ‘free energy’, ‘cold fusion’, a ‘room-temperature superconductor’, and so-called ‘space-time metric engineering’ are a perennial. “Pais’s patents flow as an intimidating river of mumbo-jumbo that most trained physicists would recognize as nonsense,” says Gubrud. “Pais deploys fairly sophisticated babble to make this sound plausible to those who know what real physics sounds like, but don’t understand much of it. Which is likely to include most patent examiners, journalists, and Pais’s own enablers in the Navy.” Gubrud suspects that the people at the Naval Air Warfare Center have been fooled by Pais.

• So why would the military make these next-generation technologies public? With so many new aerospace technologies on the brink of deployment, perhaps this is an attempt to essentially “weaponize” patents by sowing doubt among our adversaries, or even create confusion among the American populous. After all, Sheehy has alluded to Chinese advances in this type of technology, and disinformation is often used as a geopolitical strategy. Another reason for publicizing advanced propulsion technology is to explain away the recent surge of UFO sightings, even by the Navy’s own fighter pilots. It may be part of the groundwork for an increase in the Navy’s budget to invest in further research into these exotic technologies. Or all of this could be a case of wasteful, misguided, or even downright corrupt spending on ideas that have no real chance of paying off down the line.

• There is still so much we don’t know about the technological developments the Navy is pursuing, or that it is at least acting like it’s pursuing. The existence of these patents and the underlying documentation we’ve brought to light has only made this case more puzzling, especially in contrast to experts who claim there is no way these patents could describe actual working technologies. Despite the declarations made by Dr. James Sheehy and attorney Mark Glut, the appeals surrounding the room temperature superconductor patents are still ongoing.

Last month, The War Zone reported on a series of strange patent applications the U.S. Navy has filed over the last few years and questioned what their connections may be with the ongoing saga of Navy personnel reporting incidents involving unidentified objects in or near U.S. airspace.

We have several active Freedom of Information Act requests with the Department of Navy to pursue more information related to the research that led to these patents. As those are being processed, we’ve continued to dig through the U.S. Patent and Trademark Office’s (USPTO) Public Patent Application Information Retrieval database to get as much context for these patents as possible.

In doing so, we came across documents that seem to suggest, at least by the Navy’s own claims, that two highly peculiar Navy patents, the room temperature superconductor (RTSC) and the high-energy electromagnetic field generator (HEEMFG), may in fact already be in operation in some manner. The inventor of the Navy’s most bizarre patent, the straight-out-of-science fiction-sounding hybrid aerospace/underwater craft, describes that craft as leveraging the same room temperature superconductor technology and high energy electromagnetic fields to enable its unbelievable speed and maneuverability. If those two technologies are already operable as the Navy claims, could this mean the hybrid craft may also already operable or close to operable? Or is this just more evidence that the whole exotic ‘UFO’ patent endeavor on the Navy’s behalf is some sort of ruse or even gross mismanagement of resources?

The Navy’s patents and their alleged operability

At the heart of these questions is the term “operable.” In most patent applications, applicants must assert proof of a patent’s or invention’s “enablement,” or the extent to which a patent is described in such a way that any person who is familiar with similar technologies or techniques would be able to understand it, and theoretically reproduce it.
However, in these patent documents, the inventor Salvatore Pais, Naval Air Warfare Center Aircraft Division’s (NAWCAD) patent attorney Mark O. Glut, and the U.S. Naval Aviation Enterprise’s Chief Technology Officer Dr. James Sheehy, all assert that these inventions are not only enabled, but operable. To help me understand what that term may mean in these contexts, I reached out to Peter Mlynek, a patent attorney.

Mlynek informed me that the terms “operable” or “operability” are not common in patent applications, but that there is little doubt that the use of the term is meant to assert to the USPTO that these inventions actually work:

All of these technologies – the room temperature superconductor, the high-energy electromagnetic field generator, and the hybrid aerospace/underwater craft (HUAC) – are inventions of the same NAWCAD aerospace engineer, the aforementioned Salvatore Cezar Pais. Our previous article on the Navy’s patents explored the hybrid craft and whether or not it could be related to other developments such as Navy pilots reporting strange objects in U.S. airspace during training exercises and members of Congress now asking for answers on UFOs.