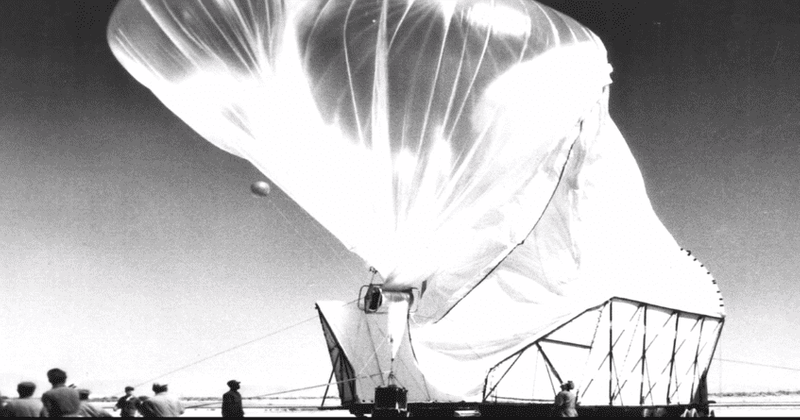 Truth Behind Roswell ‘Alien’ That Made a Woman Faint

• In February 2012, at the Air Force Technical Applications Center (AFTAC) in Patrick Air Force Base near Melbourne, Florida, retired Air Force Colonel Chuck McBrearty told the annual awards banquet audience the “true” genesis of the ‘alleged’ Roswell “alien encounter” and UFO crash ‘myth’. McBrearty said he was told the story by Air Force scientist Walter Singlevich in the late 1980’s. Singlevich was a member of the Manhattan Project that developed the first atomic bomb. Working out of Alamogordo Air Force Base in New Mexico (now known as Holloman Air Force Base) in the 1940s and 50s, Singlevich became one of America’s pioneering experts on analyzing nuclear materials at the dawn of the Cold War.

• According to AFTAC command historian James Michael Young, in the late 1940s Singlevich’s job was to launch balloons from Alamogordo Air Force Base where they would remain aloft for 48 to 72 hours, drift with prevailing winds, and collect radioactive particles from Nevada Test Site detonations. Then Singlevich would head into the field to collect the fallen balloons. Military scientists hoped to use this technology under ‘Project Mogul’ to someday detect secret Soviet nuclear tests. But the balloons proved unreliable and too expensive, and the project only ran from 1947 to 1949.

• Using archival sources, in 2019 Young authored a 400-page Air Force publication about the creation of the U.S. Atomic Energy Detection System, currently under review by various federal agencies. From this research, Young ‘fleshed out’ the details of an encounter said to have occurred in 1947 that led to the rumors of a UFO crash involving small aliens just outside of Roswell, New Mexico, about 100 miles from Alamogordo. But Young’s research leads him to believe the event actually happened during Operation Buster-Jangle (October-November 1951) or Operation Tumbler-Snapper (April-June 1952).

• On this occasion, Singlevich and a young Air Force pilot, Captain Jim Whidden, took a helicopter from from the Roswell Army Air Field to fly over the desert in search of a silver Project Mogul balloon that had landed atop a knoll. They landed the helicopter in a depression west of the knoll. East of the knoll lay a shallow valley, with a ranch house in the middle. The men donned radiation protective gear, including a suit, hood and respirator.

• Jim Whidden, who is today a colonel and the director of staff at the Air Force Technical Applications Center, recalled that at 5’6” Singlevich was short-statured. Wearing their bulky suits, they walked up over the rise. The rancher’s wife who lived in the ranch house was already walking towards them. Whidden says that “when she saw them, she fainted.” The two men made sure she wasn’t hurt and left her there. They gathered up the balloon and all of the equipment, took it back to the helicopter and left.”

• At the awards banquet, Colonel McBrearty quoted Singlevich as saying that the rancher’s wife “looked at us in shock, gasped and then fainted dead-way! …It was one of those, ‘What do we do now?’ moments. …We then grabbed the payload, bundled up as much of the balloon as we could gather, and ran back to the helicopter. In a few seconds, we were outta there!” Then McBrearty commented that Singlevich was only about 5′ 6” inches tall, and “when garbed in that baggy radiation suit and a full face mask respirator, he certainly would fit the descriptions of the alien space men that were subsequently reported.”

• The rancher’s wife’s identity and location remain a mystery. But in later years, Singlevich would say that the stunned woman would have passed a lie detector test while contending she had seen extraterrestrial visitors and their ship, and he would joke with his Melbourne Beach friends that he was a ‘Roswell space alien’. Singlevich died in 1992 at age 73.

• This Florida Today website article is the first time that Air Force personnel have shared this story publicly. According to the official Air Force command historian James Michael Young, the incident occurred in 1951 or 1952 and was considered classified until 2017.

• Martha DeMarre, who manages the Nuclear Testing Archive of more than 400,000 historical documents related to nuclear testing in Las Vegas, said she has never heard this story before.

• In April 2014, a new $158 million state-of-the-art AFTAC headquarters was named in Singlevich’s honor during a ribbon-cutting ceremony at Patrick Air Force Base, calling him “the most revered scientist in (the Air Force’s) rich history”. The secretive facility near Melbourne Beach, Florida monitors the globe for nuclear explosions, using a network of more than 3,600 sensors. And with regard to the enduring Roswell UFO crash story, the official command historian, Young, noted that the Air Force “very comprehensively disproved” the Roswell UFO cover-up in a 1994 report.

• [Editor’s Note]   Really? This is the story that the Air Force is going with? These people are just stone cold liars. Clearly, the deep state military industrial complex intends to cover up the Roswell UFO crash perpetually. The dates don’t even match. It is beyond dispute that the crash occurred in July 1947. And Project Mogul ended in 1949. But the Air Force’s official “command historian” is now changing the year of the “alleged Roswell incident” to 1951 or 52?  Not only that, but look at the size of the Mogul balloon (above).  They want us to believe that two guys gathered it up, threw it into a helicopter and quickly left the area.  And how is it that, until now, no one ever heard about a rancher’s wife who saw an alien to begin a cottage industry around the most famous UFO incident in the world? Are we to dismiss all of the rest of the evidence and testimony? This is beyond absurd. The deep state is so accustomed to altering history with impunity, they take it for granted that they will get away with it again this time.

After taking off from Roswell, Walter Singlevich’s military helicopter flew across the dusty New Mexico plains to his top-secret Cold War-era target: a silvery balloon equipped to detect nuclear detonations that lay sprawled atop a knoll near a rural ranch house.

The helicopter landed nearby. Singlevich and the pilot donned bulky 1950s-era radiation protective suits — complete with hoods and respirators — and hustled up the hill.

That’s when the short-statured Singlevich may have inadvertently added a chapter to the “little green men” alien conspiracy lore that swirls around Roswell, New Mexico, where some believe a UFO crashed in 1947.

“As they came over the rise where the balloon was, they ran into this woman who was coming from the ranch house,” said Jim Whidden, Air Force Technical Applications Center director of staff.

“And when she saw them, she fainted,” Whidden said. “So they walked over and made sure that she didn’t hurt herself, and basically left her there — this was very highly classified. They picked up the balloon and all the equipment and the sample, and took it back to the helicopter and left,” he said.

Additional details have been lost over the decades, Young said. The woman’s identity and location remain a mystery.

Singlevich, a former Melbourne Beach resident, died in 1992 at age 73 — and in his later years, he joked that he was a Roswell space alien, Whidden said. He told friends that the stunned woman could have passed a lie detector test while contending she had seen extraterrestrial visitors and their ship.

Martha DeMarre, who manages the Nuclear Testing Archive, said she had never heard the story before. Based in Las Vegas, the archive preserves more than 400,000 historical documents related to nuclear testing.

Beth Wiegand is a spokeswoman at the International UFO Museum & Research Center in Roswell, New Mexico. She said she was not surprised that the startled woman fainted nearly 70 years ago — considering she “may have encountered something that would appear to be a combination of Darth Vader and the Pillsbury Doughboy.”