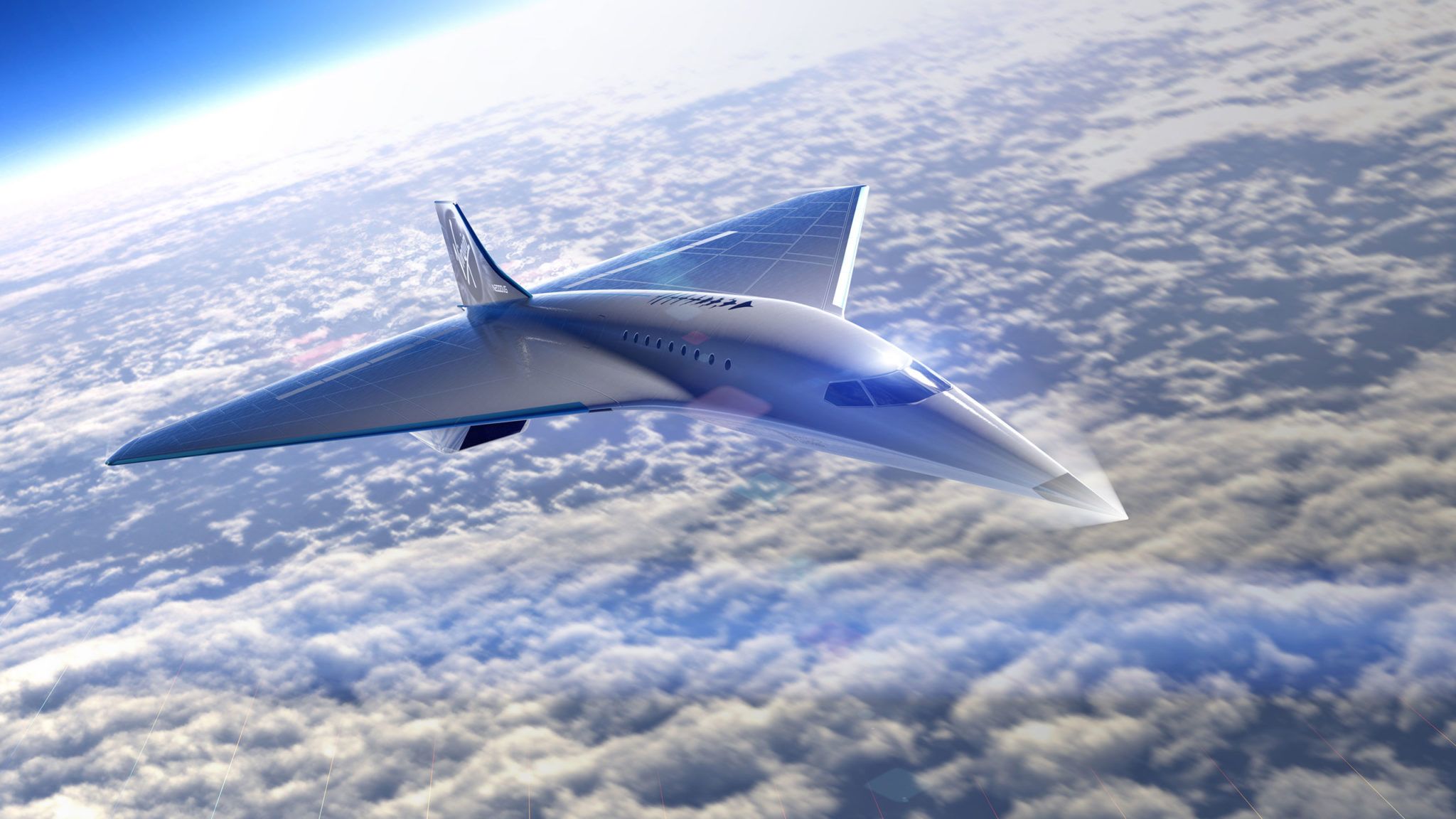 • The future of ‘Earth to Earth’ commercial transportation in the 2020’s appears to lie in two alternatives: ‘suborbital flights’ which fly above the official American boundary of space at 80 kilometers altitude, and ‘supersonic aircraft’ that stay within the Earth’s atmosphere. The suborbital craft will get you there faster (arriving anywhere on Earth in under an hour), while the supersonic aircraft will get you there safer. SpaceX and Virgin Galactic are the only two companies flying humans into space today.

• The CEO of SpaceX, Elon Musk, developed the suborbital flight concept in 2017 to transport large payloads to Mars for colonization. By attaching additional ‘Raptor engines,’ the ‘Starship’ craft’s launch system is also able to transport cargo – and eventually passengers – suborbitally from one place to another on Earth without the need for the ‘Super Heavy’ booster rocket (which is required to push the Starship craft fully into space). Test flights of the suborbital Starship system could begin in 2022.

• Richard Branson’s Virgin Galactic’s ‘SpaceShipTwo’ is another suborbital craft flying in lower Earth orbit. The spacecraft is carried into the upper atmosphere by piggy-backing on a larger airplane and launches from there. Virgin Galactic and its manufacturing partner, Scaled Composites (a wholly owned subsidiary of Northrop Grumman), plan to develop a next generation version of SpaceShipTwo (‘SpaceShipThree’?) to provide suborbital trans-continental spaceflights for passengers once it has proven itself with cargo flights.

• Astra is another spacecraft company that has plans to conduct Earth-to-Earth suborbital cargo transportation using its ‘Rocket 3’ design, possibly beginning in 2022.

• Boom Supersonic rolled out its ‘XB-1’ prototype supersonic aircraft in November 2020. It plans to develop its supersonic passenger airliner, ‘Overture’, in 2021, and plans to be operational – carrying up to 88 passengers at ranges up to almost 5000 miles – by 2029. Both Japan Airlines and the Virgin Group have placed orders for the Overture craft. Notwithstanding, Virgin Galactic recently unveiled a partnership with Rolls-Royce to develop its own supersonic aircraft capable of Mach 3, with a passenger capacity of up to 19 people.

• Aerion Supersonic, with headquarters in Melbourne, Florida (just south of Space Force station Cape Canaveral), is developing its ‘AS2 Supersonic Business Jet’, in partnership with Boeing and General Electric. It is designed to carry up to 10 passengers at speeds up to Mach 1.4.

• Both hypersonic suborbital space travel and supersonic atmospheric flight methods produce sonic booms. Supersonic aircraft produce sonic booms along the entire flight path. (This contributed to the demise of the Aérospatiale and the Concorde supersonic craft.) Rockets, on the other hand, only cause audible sonic booms during landing. The shockwaves created during a rocket launch move upwards and away from any observers to hear them.

• Aside from sonic booms, rockets will produce potentially dangerous noise levels and ‘blast danger areas’ during launch, especially those on the scale of SpaceX’s Starship and Super Heavy booster. Companies such as SpaceX plan to solve this by launching and landing far offshore from population centers, which will require additional transportation between the spaceport and the destination city. Lockheed Martin’s Skunk Works division is developing the ‘X-59 QueSST’ (Quiet Supersonic Technology) for NASA’s Low-Boom Flight Demonstration Program, to decrease the intensity of the supersonic shockwave so as not to disturb populated areas. Test flights for the X-59 are scheduled to begin in 2023 to inform legislation on approving supersonic air travel over populated areas.

• A safety advantage that winged aircraft have over propulsively landed rockets is the ability to glide in the event of an engine failure. These new supersonic airliners and spaceplane concepts are designed to be able to glide towards a controlled emergency landing. Vehicles which rely on their engines to land safely, such as Starship, do not have this contingency.

• The costs of space launches and the limited capacity on supersonic airliners will mean higher ticket prices. Will the appeal of shorter travel time outweigh the increased price? Some vehicles, such as Blue Origin‘s New Shepard rocket or Virgin Galactic’s own SpaceShipTwo, cater to ‘space tourists’ who will book a flight just to experience high speed air travel or suborbital spaceflight. They may even opt for a ticket on SpaceX’s Crew Dragon or Starship craft to experience low orbit space.

• Companies developing suborbital and supersonic commercial craft are also conscious of their carbon footprint. Their engines are designed to remove as much carbon from the atmosphere as is emitted by the flight system, to achieve ‘carbon neutrality’. SpaceX’s ‘Starship Mars’ is designed to capture methane on Mars in order to refuel the craft for its return trip to Earth.

Commercial spaceflight companies are preparing to enter a new market: suborbital flights from one place to

another on Earth. Aiming for fast transportation for passengers and cargo, these systems are being developed by a combination of established companies, such as SpaceX and Virgin Galactic, and new ones like Astra.

Technical and business challenges lie ahead for this new frontier, and an important piece is the coming wave of supersonic aircraft which could offer safer but slower alternatives to spaceflight. These two different approaches could face off in the 2020s to be the future of transportation on Earth.
(Lead image via Mack Crawford for NSF/L2)

Musk first presented this idea in 2017, envisioning suborbital spaceflights between spaceports offshore from major cities. These launch and landing facilities would be far enough to reduce the disruption of rocket launch noise levels and sonic booms produced by landing vehicles, connected to land by a high speed form of transportation such as speedboats or a hyperloop.

Originally, these Earth to Earth flights were expected to use both stages of the Big Falcon Rocket (BFR) rocket, since evolved and renamed to the Starship spacecraft and Super Heavy booster. In 2019, Musk revealed that these suborbital flights could instead utilize only the Starship vehicle with no booster, achievable for distances of approximately 10,000 kilometers or less. In order to meet thrust requirements, a single stage suborbital Starship would include an additional two to four Raptor engines.

Given the inherent danger of rocket powered space travel, the Starship system will complete many, possibly hundreds of flights before flying passengers, with the first Earth to Earth test flights beginning as early as 2022.

Another side effect of the Starship Mars architecture, which requires that methane be captured from Martian resources to refuel spacecraft and return to Earth, is that the same propellant production processes can be used on Earth to make Starship operations carbon neutral.

The idea of carbon neutrality, removing as much carbon from the atmosphere as is emitted by the system, is a crucial part of ensuring that future transportation systems do not contribute to the harmful effects of climate change. Musk has confirmed that carbon neutrality is an important goal of the Starship program.

SpaceX is not the only major commercial spaceflight company with a suborbital transportation concept. Richard Branson’s Virgin Galactic also has a vision of space travel around Earth. SpaceX’s Crew Dragon flying astronauts to Low Earth Orbit, and Virgin Galactic’s SpaceShipTwo flying crew on suborbital trajectories above the official American boundary of space at 80 kilometers altitude, are the only two commercial companies actively flying humans to space today. A successor to SpaceShipTwo is planned that could provide trans-continental spaceflights for passengers.