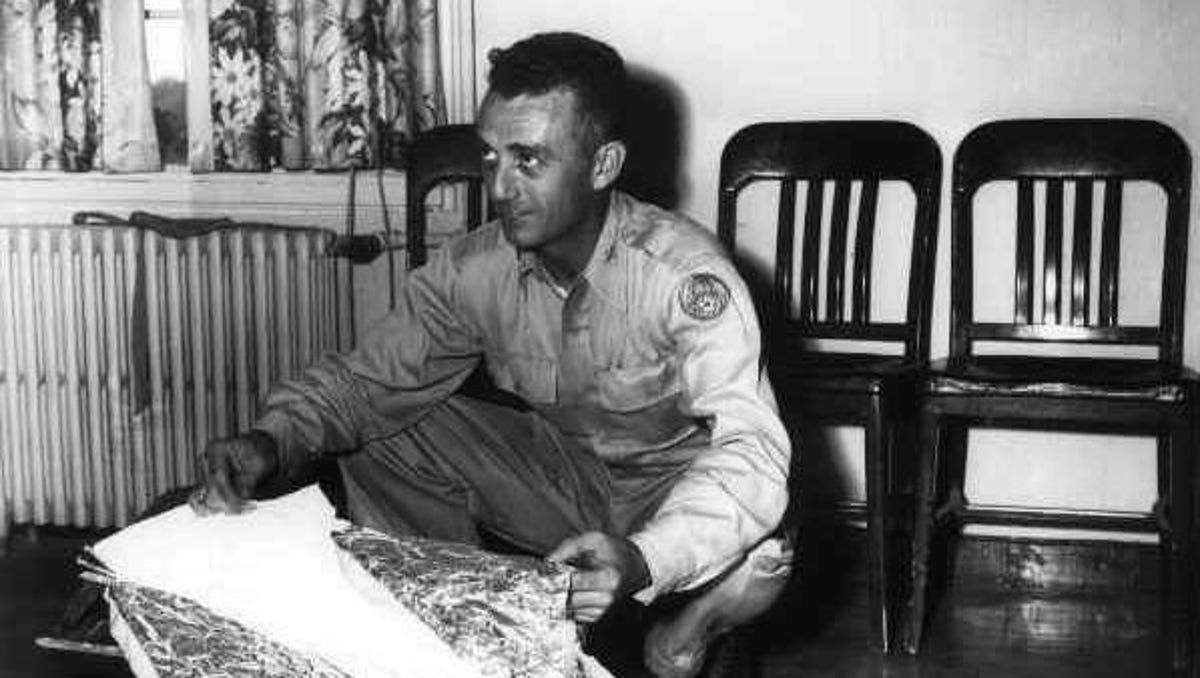 Our Grandfather Was the First to Investigate the Roswell Crash

• In 1947, our grandfather, Major Jesse Marcel (pictured above), was an intelligence officer stationed at the 509th US Army Bomb Group in Roswell, New Mexico, at the time the only atomic bomb unit in the world. In July of that year, a mysterious crash occurred in the desert outside Roswell that would change our father’s (Major Marcel’s son, Jesse Marcel Jr.) life, and our family’s lives, forever.

• The officer in charge of the 509th, Colonel William H. Blanchard, chose Major Jesse Marcel to investigate the crash site near Roswell and to report back. What Major Marcel found was remarkable, and he believed that the craft that had crashed was not made by human hands. We, Major Marcel’s grandchildren, were told growing up that he had broken protocol and a few orders by packing up some of the debris to share with his son and wife, our father and grandmother. As he shared these illicit pieces of crash material with his family members, our dad recalls grandpa saying that they were looking at “pieces of a flying saucer.”

• Dad would talk about seeing, as a 10 year old kid, foil sheets that were incredibly strong yet light as a feather, and other details of that night. He described small structural beams from the craft with hieroglyphic-looking writing that would appear when you looked at them at an angle. Roswell researchers Thomas J. Carey and Donald R. Schmidt spoke to eyewitnesses who also saw foil-like material that would return to its original shape no matter how much you twisted or tried to wrinkle it.

• On summer trips to visit our grandfather in Louisiana, grandpa would add to the story. He told us that he had also seen glass-like fiber optic materials strewn throughout the debris, and even what appeared to be an animal hit by the craft when it crashed. He described how it took five or six large cargo trucks to transport all the debris back to the base. But grandpa was still very guarded when it came to telling us too much. We could see that he was conflicted between the need to expose the entire story and the need to honor his military oath.

• As a (US Navy) military family in the early 1970s, we moved to wherever our father, Jesse Marcel Jr., was stationed – from the Great Lakes of Michigan to the rural town of Clancy, Montana. Our father educated us in everything from physics to astronomy. When not in school, we would stand side-by-side with dad working on one of his many projects. One such project was to grind thick plates of glass into a parabola shaped mirrors for a telescope he was building in the backyard. We would spend awe-filled nights looking at the sky, the rings around Saturn or the moons of Jupiter, through that telescope. When we were peering through his telescope, dad would say that we humans are not alone in the universe and there was a chance that extraterrestrial beings could be looking right back at us.

• While our father, Jesse Marcel Jr., had been silent for decades (before his passing in 2013), people never stopped asking where the debris ended up, or whether our grandfather had kept a memento. We, his children, found a diary amongst his things which had not been shared with the public. The contents of the diary were finally shared in a History Channel three-part series: “Roswell: The First Witness”, which premiered on December 12th.

• Our family is not surprised about the continued interest in Roswell given the inconsistencies in the early explanations shared by the government, along with a number of witness testimonies. Although the US Air Force stated in the 1990s that there was no “cover-up”, but that the object that crashed was a top secret balloon that was part of Project Mogul, designed to monitor Soviet nuclear testing. Still, there are many who believe it is still an unsolved “UFO” mystery.

• Grandpa considered himself lucky to have been the right person at the right place at the right time, even though it came at the cost of exposing our family to the world. With the actions that Major Jesse Marcel took both at the time of the incident and leading up to his death, we believe he showed that he well understood the extraordinary uniqueness of the event. Today, it is widely accepted that we are not alone in the universe, whatever that truly means. Incidents like the 1947 Roswell incident have inspired scientists, astronauts, and even a few grandchildren to look into the sky with hopes of someday meeting our celestial family. Grandpa would be pleased.

• [Editor’s Note]    See these previous ExoArticles on Roswell crash documents and journal that Major Jesse Marcel bequeathed to his family at his death in 1986: “Marcel Family Shares Never-Before-Seen Artifacts; Treasure Trove for UFO Researchers” and Pascagoula UFO abductee Calvin Parker’s account of where Major Marcel hid the foil-like UFO material: “US Army Major ‘Hid Debris From Roswell UFO Crash in His Water Heater After Government Tried to Cover it Up’”.

Our grandfather, Major Jesse Marcel, was a decorated intelligence officer in 1947 stationed at the 509th Bomb group, at the time the only atomic bomb unit in the entire world. He played an integral role in planning the group’s nuclear strike sorties over Hiroshima and Nagasaki in Japan, and had an illustrious career guarding some of the most important secrets of the Second World War.

In early July of that year, a mysterious crash occurred in the desert outside Roswell, New Mexico and he was chosen to investigate the crash site and report back to his superior, Colonel William H. Blanchard. What he found was remarkable, and he believed that what he was examining was not made by human hands. We were told growing up that he broke protocol and a few orders by packing up some of the debris to share with his son and wife, our father and grandmother, before returning to the army base. This was an event that would change our father’s life, and our own, forever. As they were examining the material, our dad clearly recalls grandpa saying that they were looking at “pieces of a flying saucer.”

Dad would share with us many more details of that night, often at dinner time with Star Trek playing in the background for effect. He would talk about seeing foil sheets that were incredibly strong yet light as a feather. He would further describe beams with hieroglyphic looking writing that he claimed would appear if you looked at them at an angle.

In their book Witness To Roswell, Thomas J. Carey and Donald R. Schmidt spoke to eyewitnesses who said

that they saw “metal” material, like that described by our father, that returned to its original shape no matter how much you twisted or tried to put a wrinkle in it.

On summer trips to visit our grandfather in Louisiana, he would add to the story. He told us that he had seen glass-like fiber optic materials strewn throughout the debris in the field and even what appeared to be an animal hit by the craft that had crashed. He would describe how it took five to six large 2.5 ton 6×6 cargo trucks to transport all the debris back to the base.

As we grew older, Grandpa would share more of the story with us but was still very guarded when it came to telling us too much, maybe out of concern that information that haunted him would come back to haunt us. We could see on his face that he was conflicted between the need to expose the entire story as he saw it and the need to honor the oath he had taken to his country. We would try to get him to tell us more, but with a career in intelligence, he knew how to record and keep a secret.