Tag: 24 Elders of the Galaxy 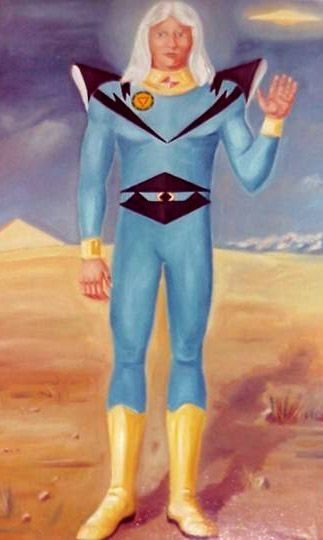 Conscious contacts after invitations are happening right now. Many Mision Rahma (for the most part, Hispanic) contactees have discovered other worlds physically, mentally, astrally, telepathically, and through holographic projections. They have befriended respectful extraterrestrials that in my view- exist in a higher physical level, a reason why the contactees’ bodies, minds and energy fields had to be prepared to achieve healthy encounters. Elements of a once lost complex history of humanity have been recuperated which unfortunately,  includes various forms of abusive and mistaken extraterrestrial interventions. However besides indigenous Earth genetics- we may have been genetically combined with at least 12 major extraterrestrial species relates us to “them,” to their tendencies, their abilities, their genetically associated descendants and offshoots and to their spiritual and psychic potentials. Thus, there is a great expectation among many ET groups and subgroups because they want to learn from us how to move ahead in evolution. While most adhere to strict ethical norms and principles and are aligned in respect to Earth’s representative the universal sovereign Master Jesus the Christ– with what we could term a large Confederation also under the spiritual guidance of 24 Elders in our Galaxy and 9 Elders in the Andromeda Council there are some (human, reptile and grey looking) who may follow their own independent, non-aligned paths. Some are Orions under a Luciferian influence. Although some of these ET varieties may have some rights to intervene in a limited way on planet Earth (also called Merla by other civilizations) all are monitored and supervised. Moreover, since Earth is in a type of ‘cosmic quarantine’, some rogue ET types having nothing to do with our special human history are not allowed to interfere and there are overseers that stop them. Those (both positively and negatively inclined) already participating are allowed specific kinds of intervention according to need but must follow specific protocols because the interests of many ET groups as a whole are at stake. This is why not one group has simply and crudely invaded us. There’s a general agreement and supervised control mechanisms so that not one group excedes itself as it may have happened in the past.

The overall situation involving the many extraterrestrial civilizations, groups and subgroups intervening on Earth is much more complex, unified and interrelated than normally expected and cannot be reduced to a simple explanation. However, there are underlying patterns that can be elucidated and the word complex should not be a turn off against learning. Additionally, in my own view, a shared degree of transdimensional technologies force all extraterrestrial coming into our shared reality to abide by mutual respect rules because the waywardness of one could also be adverse to the needs and projects of others.

As part of the process signaled by the end of the more known long count Mayan calendar humans are supposed to gradually reconnect with (and to become aware of) a timeline that involves most extraterrestrial groups involved in humanity’s seeding. Allegedly, from the ETs perspective their timeline will be affected sooner and in my understanding- we will affect them as if we had an “internal” locus of control with respect to to them. However, from our terrestrial perspective, we will gradually connect with their timeline. Furthermore, a third timeline (resulting from the fusion) is emerging.

Now, besides becoming more aware of our history; besides remembering who we are, understanding cosmic principles and gradually joining or participating in the multidimensional Cosmos; besides becoming aware of our full manifestation potential as highly unique beings (according to God’s Plan), capable of connecting the three main realms of God’s Creation(without technology), many extraterrestrials of our forgotten history hope that once we find out- we’ll find the inner strength and fortitude to forgive them from the terrible mistakes committed against us. They want to become more wisely emotional and to recuperate some atrophied chakra functions. They want to learn from our emotions which can also connect us with the greatest power: God’s Love, something which they forgot or inhibited by incorporating too much mental wisdom and technology due to a history of excessive dependence on powerful non-physical beings. They want to understand how with our high degree of free will we might overcome our highly polarized state within a dense, effervescent physicality as it gradually shifts to subtler influences.

There have been many levels of contacts in Mision Rahma and one of the more important ones have been through the dimensional portals called xendras. Over the years perhaps a couple of dozen Mision Rahma participants have been allowed to travel to a colony in the moon of Jupiter we call Ganymede and which the confederated ETs call Morlen. Morlen was founded by individuals from a region in Orion and by others who didn’t adhere to a Luciferian-influenced rebellion stemming from a non-physical realm. It is a colony made of several kinds of colonists and, in the 1970’s, some Mission Rahma participants were taken as a group through a Xendra portal to experience a direct encounter with their wise governing elders: The Minors of Morlen. There, peaceful life is sustained in semi underground dwelling complexes through advanced technology and I think that their living physical frequency is not as dense as on physical Earth. However, through what could be called an ‘energy cloak’ surrounding contactees when taken there after some preparation (involving discipline but not an insurmountable rigor), current Earth humans can for special purpose occasions travel there. Some of these occasions have served to receive information as when they were showed a book preserving a complex but meaningful cosmic history, or when Master Jesus (who apparently possesses a resurrected body capable of traversing all seven levels of the Physical Universe or Realm and of perfectly connecting the Mental and Spiritual (Causal) universes or realms) wanted to inspire workin on Earth through a direct message.

Quite often the preparation takes the form of a lacto-ovo vegetarian diet, regular daybreak solar and nighttime Moon energy incorporation meditations, meditations on our (telepathically received) cosmic name, psychophysical (tai chi and moving, yoga-like) exercises, intuition and psychic development exercises, self-control practices (such as being alone and in silence in a dark place in the countryside), regular camping excursions to get close to nature and the development of a healthy, socially responsible and emotionally balanced life. An aid to preparation has also been the energetic implantation in the chest area of a pair of semi materialized cesium crystals whichÂ are then absorbed into the astral body and help to assimilate a shift of programming energies coming from the center of the galaxy (decades before the end of the known long count Mayan Calendar in 2012).

When some participants develop telepathic and-or automatic writing abilities, dates, times and places are often given to verify the communications through spacecraft sightings. Sightings should preferably be unequivocal and not to be confused with satellites, airplanes, etc. and the communications should not promote a single person or an ego but be non-forcing, respectful and constructive with coherence and specificity as need be while the spiritual guiding aspect should trans temporally build upon previous and subsequent communications. Sometimes, these communications are received in different places by different â’antennas’ (rather than channelers) simultaneously or consecutively but complementing each other. In time, an easygoing rapport of trust and friendship with friendly extraterrestrial beings needs to develop without lies or manipulations.

It would behoove wise exopoliticians to (through genuine, approachable, well-intended contactees)try to relate with the benevolent and respectful, positively spiritually-based kinds of extraterrestrials who are not willing to give us right away the technologies we can’t ethically handle. The path of assuming the general role expected for humanity in the Cosmos must start with spiritual principles, forgiveness, love, truth and wisdom. Connecting with more communicative extraterrestrials working under an organization aligned with Christ Jesus and positively-oriented galactic and inter galactic elders (also assisting Earth’s White Brotherhood) would be more convenient in the long run for humanity than focusing most of our attention on power feuds, cover-ups and technologies.

Perhaps cultural differences preclude segments of humanity from these kind of contacts. Perhaps they require simple, dedicated sensibilities like those of the many well-intended Hispanics participating in Mission Rahma’s contacts. However, it would behoove exopoliticians and other principled, idealistic persons of good will to prepare themselves for greater degrees of contact with these benebolent extraterrestrial beings (why not also call them “friends” and “older space brothers”?) either directly or through well-intended, genuine contactees. It would be a great way to begin learning the ABCs of the exopolitical situation outside our planet.

Regarding Xendras, contactee Sixto Paz Wells from Peru tells us that:

Among the least known contact experiences which nonetheless is one of the most extraordinary and incredible are the Xendra Interdimensional Doors. A ‘xendra’ is a dimensional door or space-time threshold. As they (ETs) told me, they have been able to concentrate energy in such a way that they can dematerialize a person, canceling his molecular cohesion and atomic weight and they can project or send him to another place.

The xendra is the projection of concentrated light that accelerates the person’s vibration and acts as a dimensional transference vehicle and threshold in space-time. (Again) the person going through a xendra depending on its intensity- can even be dematerialized to be tele-transported to another place, canceling his molecular cohesion and atomic weight. This experience can occur many times during the personal and collective preparation process. This means that one can re-live it many times in which case there are many kinds of xendra that allow from a physical experience to a mental projection or also a bilocation or also a conscious astral experience.

The types of xendras are:

a)  Xendra I: A kind of dimensional door designed for a single person in the company of an extraterrestrial being or guide. This xendra usually has the shape of a half Moon, about 10 meters (33 feet) in diameter and allows a physical experience of dematerialization with the local disappearance of the person and his projection to another place which could be the interior of a spaceship, an intraterrestrial or sub aquatic base or even another planet.

b) Xendra II: is that xendra in which up to seven persons can go inside while coordinated or accompanied by two extraterrestrial beings. This experience can also be physical or of a mental projection or bilocation and the shape can be that of a golden half Moon, oval-shaped, like an arch or different.

c) Xendra III-IV ‘Gimbra’: This is the kind of xendra that allows up to 12 persons to go at once inside and it is usually coordinated by the Confederation’s Council. This xendra varies its form from something like a greyish silver dome to a whitish or glistening blue cloud or a dome where sparks float above the ground having a whitish surface. It can measure a diameter greater than 10 meters (33 feet). Unlike the other types of dimensional passages this kind of xendra facilitates a profoundly spiritual experience of cosmic integration. The other xendras can provide physical mental or astral experiences but many persons go through the threshold and don’t manage to remember what they experienced inside and this is why they might have to work during their meditations and conscious regressions in order to remember it.

When one goes inside one of the (physical teleportation) xendras one feels dizziness, nausea, a sensation of losing weight. One feels as if the entire body is burning, a very strange sensation. In some cases one feels being like an inside-out sweater or jersey, as if one has been turned inside-out completely, somewhat similar to the story of Alice in Wonderland, meaning that they place you on the other side of the mirror. It really is an extraordinary experience, above all because when I first went into it I estimate I was between 4-5 days (in Ganymede) but upon my return found out that only 15 minutes had passed.