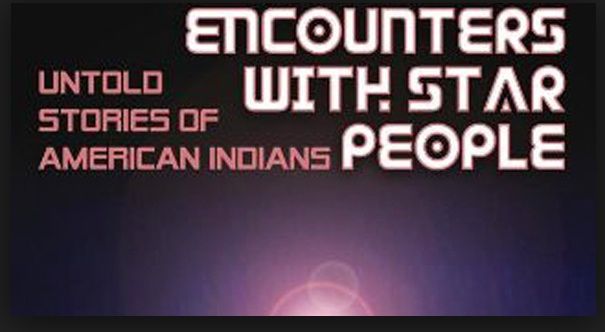 • Indigenous cultures from North America recount stories that date back thousands of years of extraterrestrial “Star People” who brought spiritual teachings and stories and maps of the cosmos. They were kind and loving, and when they left there was a loneliness like no other.

• Dr. Ardy Sixkiller Clarke is a Cherokee/Choctaw and a Professor Emeritus at Montana State University who has been researching encounters between the Star People and Native American Indians for many years. In Clarke’s book, “Encounters With Star People, Untold Stories of American Indians”, she writes that it is not uncommon for these Star People to take away people, families, and in some cases entire communities.

• In 1930, a fur trapper named Arnaud Laurent and his son saw a strange light and a bullet-shaped aircraft crossing the sky in northern Canada. When trapper Joe Labelle arrived at a nearby fishing village of 2,000 Eskimos, it was deserted. He visited every hut and storehouse and found blackened stew pots and untouched provisions and food, but no people or even footprints. Labelle reported this to the Royal Canadian Mounted Police who were baffled by the mass disappearance of the villagers. A search party found sled dogs buried under a 12-foot snow drift at the perimeter of the village. The mass disappearance remains unsolved, and Eskimos still tell the story about the UFO that abducted an entire village.

• Native Americans also tell of entire families that have disappeared from their reservations without a trace. These events occurred simultaneously with the emergence of a mysterious craft. On one occasion a family of 14 disappeared, leaving behind filled plates on the dinner table, an oven that was still turned on, and a television blaring in the bedroom. No family member was ever located, but their relatives can show you a burned out circle on the ground where they believe a spacecraft landed and spirited them away.

• There are even stories of entire civilizations that have vanished without a trace, like the Mayans in Central America. What happened to them still remains a mystery, and some believe they were also ‘taken.’

• Dr. Clarke describes an encounter she had with an elder named Luther who lived on a reserve in North Dakota. He explained how it was not uncommon when he was a child for Star People to visit the reservation. “Sometimes when people disappeared on the reservation, it was said that the Star People had taken them away to live in the stars,” said Luther. But when the government came in and changed the land, the Star People stopped visiting.

• One time, Luther saw a UFO the size of a battleship come over a butte to the north of a ranch property. The horses ran away, but Luther sat down on the edge of the lake and watched. The craft moved to the center of the lake and just stayed there suspended in mid-air. When he started to walk back toward the cabin, a search light from the craft fell directly on him. He just kept walking and went inside. He looked out of the bedroom window and saw two of the beings. Then they were inside his bedroom.

• The two beings in his bedroom seemed just as surprised as he was. They were humanoid, about 5′-7″, and dressed in light colored uniforms with gloves. They told Luther that they wouldn’t hurt him, and were searching for something they had left behind. Luther recalled the beings carrying a “stick” with blinking lights which they pointed around his bedroom trying to locate something. When they did not find whatever it was, they put the stick back in its holster. After the disappearance of a Native family from that location, the government built a dam to create a lake over that very spot. The beings went back to their craft, and the craft hovered over that spot on the lake where the missing family once lived. Then it suddenly moved upward and it was gone.

Despite the fact that this topic has been considered a “conspiracy theory” for years, any intelligent person who actually decides to take a gander at the evidence cannot really deny the existence of unidentified flying objects (UFOs) as well as the idea that some of them may actually be piloted by extraterrestrial beings from somewhere else in the multiverse. As far as UFOs go, there is physical evidence in the form of materials from downed crafts, radar trackings, pictures and videos. When it comes to the extraterrestrial hypothesis, there are witness testimonies from generals, other high ranking government officials, whistleblowers, and astronauts from all over the world. The fact that these crafts perform maneuvers no known man-made aircraft can also contributes to the extraterrestrial hypothesis.

Another factor to consider is the vast amount of stories that date back thousands of years told by several cultures all over the world, from ancient lore all the way to modern day lore. Indigenous cultures from North America are a great example. “My people tell of Star People who came to us many generations ago. The Star people brought spiritual teachings and stories and maps of the cosmos and they offered these freely. They were kind, loving and set a great example. When they left us, my people say there was a loneliness like no other.”

For the past few months, I’ve been sharing the work of Dr. Ardy Sixkiller Clarke, a Professor Emeritus at Montana State University who is Cherokee/Choctaw and has been researching the Star People and collecting encounters between them and Native Indians for many years. She first learned about the “Star People” when her grandmother told her the ancient legends of her people. I’ve written about a story she shared regarding an elder who told a story about a ship that crashed on his reservation. You can read that story here. I wrote about another elder who shared a story of a petrified alien heart, which he claimed belonged to the Star People, and you can read that one here. My last one was about the stories told by indigenous elders about Star People who are currently, and have been for a long time, living inside of the Earth.

This will be my fourth article sharing the stories Dr. Clarke compiled in her book, Encounters With Star People, Untold Stories of American Indians.

Chapter three is titled “Sometimes they come for families.” Right off the bat I find this interesting because having been a researcher into the phenomena myself for a very long time, I know that the idea that some of these beings are ‘taking’ people, families, and in some cases large communities is not uncommon.

It might sound scary, but the truth is that within the lore, many of these beings don’t have much interest in hurting or harming us. That being said, there are stories of both malevolent and benevolent types of beings, but for the most part it does not seem that the various groups visiting us mean us any harm. There are things happening that we don’t understand, or perhaps we’re not capable of understanding, yet some of these events we might perceive in a fearful, harmful way. When it comes to supposed abduction stories and the claims made by tens of thousands of people, there are many consistencies in their stories. It’s truly a very interesting issue to look into, but that’s a different story.