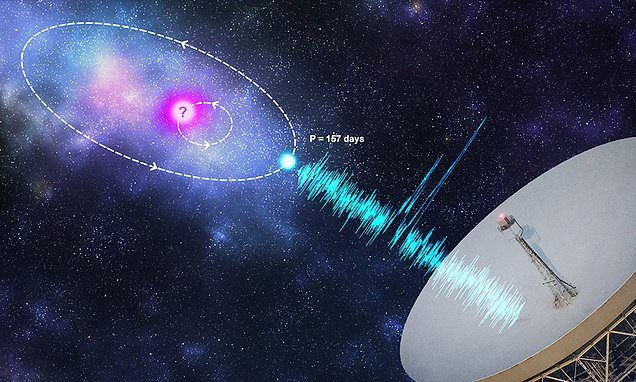 • During a survey by the Australian Square Kilometer Array Pathfinder telescope, astrophysicists’ cameras discovered unexplained radio wave patterns being emitted from an invisible force in deep space, possibly from another galaxy. The waves take the form of blasts of colorful circular objects, lending to its name, ‘Odd Radio Circles’.

• Nature Astronomy reports that researchers concluded that it is a ‘never before recorded phenomenon’. No optical, infrared or x-ray source could be traced to the pulses. The extraordinary study offers a tantalizing glimpse of a deep space mystery that could one day yield answers about the mysteries of the universe.

• The circular pulses were found to match a similar radio wave structure located in March 2013. But rather than normal sphere space objects – like remnants of dying stars as well as proto-planetary discs – these new ones “appear to be a new class of astronomical objects”. “The objects appear in radio images as circular edge-brightened discs about one arcmin diameter, and do not seem to correspond to any known type of object,” the astrophysicists wrote. “We speculate that they may represent a spherical shock wave from an extra-galactic transient event, or the outflow, or a remnant, from a radio galaxy viewed end-on.”

• Speaking of weird radio signals coming from another galaxy, this past February, ‘Fast Radio Bursts’ were documented at the Canadian Hydrogen Intensity Mapping Experiment in in British Columbia. (see previous ExoArticle here) The ‘FRBs’ were coming from a galaxy some 500 million light-years from our solar system sending out fast radio bursts like clockwork. The cycle stretches over a roughly 16 day period, including 1-2 bursts per hour over a four-day period and then a 12-day gap before it starts again.

• Such signals have long given fuel to theories about extraterrestrial life existing elsewhere across the cosmos.

Astrophysicists have discovered unexplained radio wave patterns being emitted from an invisible force in deep space.

Known as ‘Odd Radio Circles’ or ORC, it’s believed they may be coming from a mysterious structure from another galaxy, unseen by human eyes.

The waves take the form of blasts of colourful circular objects, which were pinpointed by cameras during a survey by the Australian Square Kilometre Array Pathfinder telescope (ASKA).

Despite searching for an optical, infrared, or X-ray source to the pulses, none could be traced, leaving experts baffled.

Researchers have concluded it is a never before recorded phenomenon, a review in Nature Astronomy reports.

The results of the extraordinary study are still to be peer-reviewed but offer a tantalising glimpse of a deep space mystery that could one day yield answers about the mysteries of the universe.

Researchers zoomed in on the objects during a survey of the universe using the ASKA.

After three snaps of the mysterious ORCS were captured they were compared to the existing archive and found to match a similar radio wave structure located in March 2013.

The authors of the study note radio images are normally sphere space objects – like remnants of dying stars as well as proto-planetary discs
These new ORCs by contrast “appear to be a new class of astronomical objects” they said.