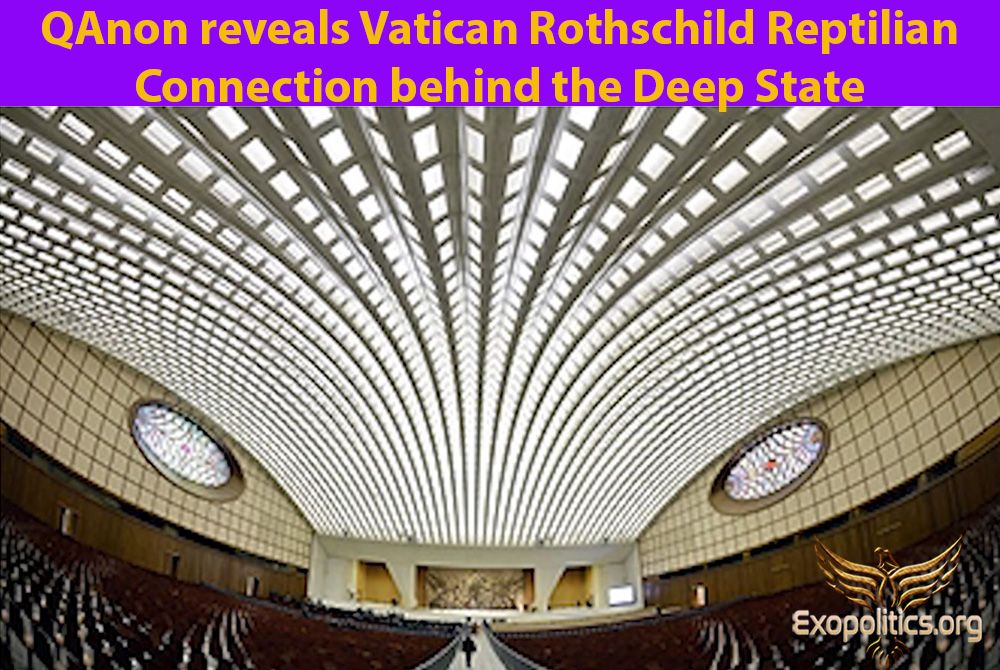 In a recent series of posts, the anonymous whistleblower (group) QAnon made an important connection between the Vatican, Rothschild family, and Reptilian symbolism. Many followers of QAnon, who fall into the camp of Christian patriots, perceive the connection as exposing an other-worldly Satanic influence over the Vatican, the Rothschilds, and other forces making up the Deep State.

Closer analysis, however, suggests that what QAnon is really referring to by the symbolism is a very physical “this-worldly” influence over the Deep State: Reptilian extraterrestrials.

To begin with, I need to point out what has become very clear to those closely following the QAnon posts, which first appeared on October 28, 2017. QAnon represents several military intelligence officials who are leaking sensitive information in a cryptic and coded manner due to the pervasive influence of the Deep State over many institutions of political, financial and cultural power.

QAnon’s close relationship with President Donald Trump has been demonstrated in various public ways. This has signaled he supports the QAnon revelations and is very familiar with who is really behind the Deep State attempting to sabotage his Presidency. In regard to Deep State efforts to sabotage the Trump Presidency, I highly recommend reading Dr. Jerome Corsi’s book, Killing the Deep State.

We are now ready to take a closer look at what QAnon is saying about the Vatican, Rothschilds and the Reptilian connection.

On April 3, QAnon made the following post where he attached an image posted by another anonymous source asking the question, “If Satanists took over the Vatican would you notice?”

The image was of an auditorium built by the Vatican that was completed in 1971, with a seating capacity of 6,300. Named the Paul VI Audience Hall, it is filled with Reptilian imagery, and clearly alludes to a powerful influence exerted by such beings over the Vatican.

In the following video, the narrator gives five reasons why the Audience Hall’s symbolism leads to the conclusion that the Vatican is run by Reptilian beings.

So does the symbolism in the Paul VI Audience Hall really show Reptilian control over the Vatican?

QAnon helps answer such a question by his response to the posted image: “Symbolism will be their downfall, MONEY. POWER, INFLUENCE.” By emphasizing symbolism, QAnon is saying that we need to closely examine the Reptilian imagery in the picture in order to really understand who controls the Vatican.

QAnon’s reference to “MONEY, POWER, INFLUENCE” points to a nexus of actors that underscore control of the Vatican. This is where another QAnon post becomes helpful in understanding this nexus of actors.

On April 4, QAnon posted the following:

He pointed out that the Vatican Bank (Institute for the Works of Religion) is at the fulcrum point of its financial influence through its shady relationship with the CIA (“Clown connection”).

However, QAnon’s most intriguing reference was to the 1832 Rothschild loan. QAnon suggested here that the 1832 loan made the Vatican dependent on Rothschild financing at the time, and this dependence continues into the modern era. This is not surprising since at the time, the Vatican was desperate to maintain its diminishing temporal authority over the remaining territory of the Papal States (754-1870), which was increasingly being challenged by Italian secular nationalists.

It was this effort to maintain political control over the Papal States that made the Vatican increasingly dependent on the Rothshchilds, who could move their agents into senior positions in the Catholic Church hierarchy. This included the Sovereign Military Order of the Knights of Malta, which continues to be a powerful force that links Rothschild finances with elites drawn from around the world.

This is where it becomes very helpful to recount a story told by a former U.S. Air Force doctor, Bill Deagle, M.D., who described in a Project Camelot interview a mysterious encounter he had with a leading member of the Rothschild family, Baron Guy De Rothschild, in 1992:

I woke up in the middle of the night, bolt upright, and I sat up. And I had all the lights on because I’d have to periodically go to the restroom or whatever. I had all the lights on. And this guy was standing in front of me with what I call a $5,000 tuxedo, not a gray hair in his head, mid-50s, slim and trim.

I said: How did you get in here?

And he says: It’s wonderful to see you, my son.

I said: You’re not my father.

And I looked at this guy, and he looked like French nobility. Right? And I said: Who are you?

He says: I am the Baron Guy de Rothschild, the Pindar.

And I had this really kind of, what I call a check or a kind of a cringe in my spirit. And I knew right away, because I have this gift. Right? Without getting into a big long discussion, I knew right away.

I said: I know who you are. You’re the representative of the Luciferic power that controls Earth.

He says: Yes, I am the CEO of Earth, Inc., and I am the man that sits in the 13th chair of the Druidic Council. I want you to be my understudy, and when I transcend I want you to take over my job.

He said: We know your bloodlines; we know your genetics; we know everything about you and you’re a perfect replacement for me.

What is interesting here is Rothschild’s claim that he was the “Pindar” and was the “CEO of Earth, Inc”. This suggests that he is merely running the Earth on behalf of others, but who?

For an answer, we can look to information about the Pindar supplied by British researcher David Icke. Icke wrote about the Pindar in The Biggest Secret after interviewing a former participant in Satanic occult ceremonies, Arizona Wilder. Icke wrote:

Pindar means ‘Penis of the Dragon’…  Arizona says that Pindar, like all the reptilians when they shape-shift, has very powerful hypnotic eyes (the ‘evil eye’ of legend) and at sacrifices the victims face is turned to Pindar at the moment of death for him to steal the person’s soul or energy through this ‘evil eye’ magnetic process…. Pindar attends the major Satanic ceremonies in Europe and then flies to California for the rituals there. [pp. 302-3]

The idea that a high ranking member of the Rothschild family, Guy de Rothschild, was a shape shifting Reptilian, or a hybrid of some kind, will come as to a shock to many who disbelieve that extraterrestrial life is a physical reality on Earth.

This disbelief will be markedly the case for those coming from a Christian background, who ascribe the Satanic/Luciferian influence on Earth to other-worldly demonic entities associated with Hell, as described in Biblical passages.

However, only last week, Pope Francis declared that there is no Hell! In an interview, he was quoted saying:

They are not punished, those who repent obtain the forgiveness of God and enter the rank of souls who contemplate him, but those who do not repent and cannot therefore be forgiven disappear. There is no hell, there is the disappearance of sinful souls.

While the Vatican immediately tried to walk back the Pope’s comments, his intent was very clear. Hell is no mere spiritual dimension where Satan rules and acts as a distant, but disruptive, influence on Earth through his legion of demonic spirits.

The Pope has clarified that Hell is a very physical reality and corresponds to the world created around us by sinful souls participating in Satanic rituals involving human sacrifice and pedophilia. The implication here is that Satan is a very physical being who is present on Earth, and has overlordship of the planet through hybrid intermediaries, such as the Pindar, which collectively make up the Deep State.

In making his statement about Hell, Pope Francis appeared to be breaking ranks with the Vatican hierarchy, and alluding to the awful truth about covert Reptilian influence over the Catholic Church in a very physical and tangible manner.

Further evidence of a Reptilian influence over Deep State officials involved in human sacrifice, comes from another former participant and victim in these dark ritualistic events, Cathy O’Brien. Her book, Trance Formation of America, shows the widespread belief of many political elites in secret Reptilian overlords.

In addition, John DeCamp’s book, The Franklin Coverup, reveals how pedophilia and human sacrifice is used to compromise upcoming political leaders into a corrupt system in Washington DC.

If we connect all the threads emerging from QAnon’s reference to the Vatican, Rothshchilds and Reptilian symbolism, then we reach some very disturbing conclusions.

The Vatican is largely under the influence of Reptilian extraterrestrial entities that have chosen to reveal themselves through symbolism, as found in the Paul VI Audience Hall.

Satan is one or more members of an extraterrestrial Reptilian race that has secretly ruled over humanity for centuries through human or hybrid intermediaries.

The Rothschild family is deeply implicated in this confluence of Satanic forces involving the Vatican and Reptilians, and one of its members plays the role of the Pindar, CEO of Earth, reporting to something like a Reptilian Board of Directors.

QAnon’s frequent references to the evil of the Deep State, and allusions to Satan and Satanic practices, is his careful way of referring to Reptilian entities who have historically dominated the Deep State though a subservient clique of political, financial and cultural leaders. These elite figures have been compromised through their participation in rituals involving human sacrifice, as the condition for their elevation to high office.

We now finally have an explanation for why QAnon (U.S. Military Intelligence), despite clear Trump White House support, has to communicate using cryptic and coded language about its ongoing operations to “Drain the Swamp”. QAnon is methodically exposing the historic power behind the Deep State – a very physical Reptilian extraterrestrial force – which still has influence through a subservient clique of leaders wishing to ingratiate themselves with their Reptilian overlords.

While many may be skeptical of the above conclusions, it does appear that QAnon believes that the time is ripe for the American Patriot community to be finally awakened to the truth, and therefore become active in exposing what really lies behind the Deep State in order to end its corrosive influence over human affairs.

Audio Version of the Above Article Appears Below