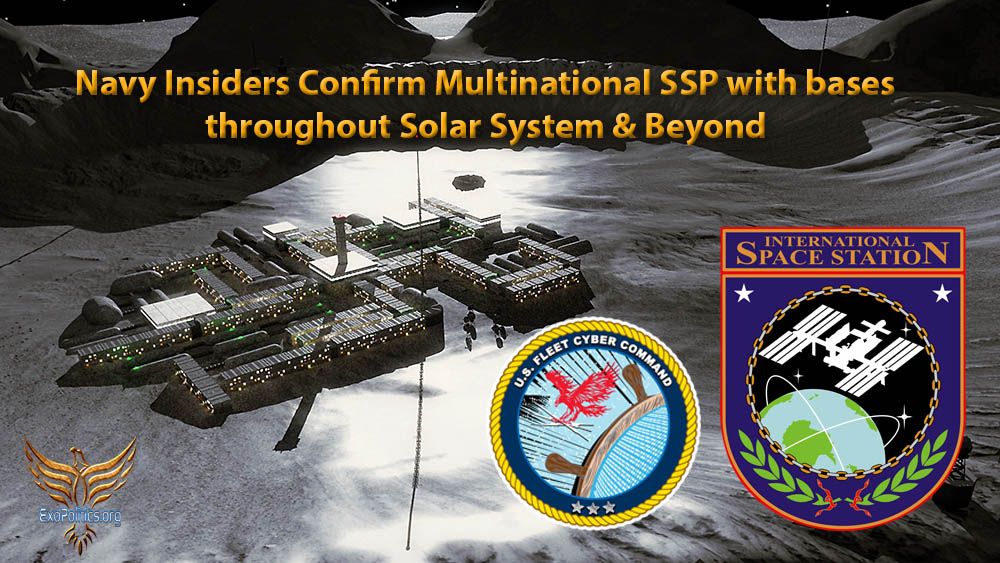 In the third instalment of a remarkable Earthfiles Youtube series on Antarctica, Emmy Award Winning Investigative Journalist, Linda Moulton Howe, has released more stunning video testimony from two anonymous Navy insiders/whistleblowers about a multinational coalition that has a secret space program with bases in Antarctica, on the Moon, Mars and even beyond our solar system.

In accord with their wishes, Howe has not disclosed their identities and has instead used the pseudonyms Spartan 1 and 2, and featured backlighting and voice altering technologies in their interviews. Howe has confirmed through official documentation they have supplied her that Spartan 1 served as a US Navy Seal from 1984 to 2004, when he retired with the rank of Commander. Spartan 2 served with the US Marine Corps (which falls under the Department of the Navy) and as an intelligence specialist from 1992 to 2016.

Spartan 1 claims he visited Antarctica in August 2003 where he witnessed a large octagon shaped structure buried 50 feet under the Beardmore Glacier, which extended down deep into the interior of Antarctica, as discussed in part 1 of Howe’s series.

Spartan 2 appeared for the first time in part 2, and discussed covert activities run out of the 8th floor of the NSA headquarters in Fort Meade, home of US Cybercommand, both of which are involved in running the space operations of a multinational alliance and the interstellar trade it conducts.

One of these multinational missions involved a trip to the interstellar object Oumuamua, which was discovered to be an ancient derelict spacecraft, as discussed in my previous article.

Spartan 1 described a secret base on the far side of the Moon used by a multinational alliance:

From my understanding, it’s both above and below ground. It’s a multi-structured facility that goes deep into the planet’s [Moon’s] crust. [Timestamp 6:16]

Spartan 2 also explained what he knew of the Moon base:

I was told that the dark [far] side of the Moon there’s not just above ground structures, there’s also an operation going. They’re building a mothership up there. They’re mining materials. [Timestamp 9:02]

He went on to assert that there are 2500 individuals working on the Moon on such operations, statements Spartan 1 agreed with.

The moon base statements by both Spartan 1 and 2 suggest that neither has actually visited the Moon base themselves, but they know about it from documentation, briefings and/or through a first-hand source they encountered during classified missions or intelligence work.

Spartan 2 has repeatedly referred to his primary contact as a senior official in U.S. Cyber Command called Kim (or Ken) who has briefed him on the classified operations of the multinational space force.

In response to questions about when the building of the Moon base began and which countries were using it, Spartan 1 responded:

It goes back to the coalition, it’s been happening for years. A lot of the times when stuff was going up, and we were told it was going up to the International Space Station, it wasn’t. It was going up to this moon… I would have to say it’s a multinational group… Great Britain, France, Germany, United States, Canada [Timestamp 7:04]

There were 15 countries that signed the International Space Station Intergovernmental Agreement on January 29, 1998. In addition to those named by Spartan 1, other nations that signed the founding documents are: Russia,  Norway, Spain, Sweden, Italy, the Netherlands, Brazil, Denmark, Japan, and Belgium.

In part 2 of Howe’s video series, Spartan 2 said that the multinational collation has had “a space fleet in existence for the last 25 years” [Timestamp 9:01] This dates back to 1994,  just four years before the formal signing of the agreement establishing the International Space Station, and just three years after the formal dissolution of the Warsaw Pact and the Soviet Union.

Remarkably, this corroborates what secret space program insider Corey Goode has been publicly asserting since 2015. He was the first to reveal the existence of a multinational alliance that operates interstellar missions. Goode called this multinational alliance the “Global Galactic League of Nations”, and he claims to have visited one of their interstellar bases on an exomoon during his 20 year and back service (1987-2007).

An entire chapter in my 2015 book, Insiders Reveal Secret Space Programs and Extraterrestrial Alliances analyzed Goode’s claims about the multinational alliance, its operations, and how it was formed as result of a covert agreement reached that ended the Cold War.

Spartan 1 went on to explain the activities occurring at the secret moon base:

I think they’re training, and as far as where they go…. I know it’s many light years away. [Timestamp 8:02]

His statement that operations are conducted “many light years away” is very significant given Goode’s earlier claims of having visited an Exomoon in an unknown solar system run by the multinational alliance.

The testimonies of Spartan 1 and 2 furthermore corroborates what Goode and other secret space program insiders have been saying about a secret base on the Moon called Lunar Operations Command (LOC). Goode says he has been taken multiple times to the LOC, and in January 2018 was given an extensive tour of much of the facility that exists deep underground.

Also, Spartan 1 and 2 discussed portals, or stargate technology found in Antarctica. One of these portals is located in the vicinity of the Wilkes Land magnetic anomaly, which Spartan 1 elaborated on:

What I’ve heard is that it’s a portal. A portal takes you from one structure to another vessel outside of our atmosphere. Like an invisible elevator. This particular portal was underground inside a structure… It had a frame. It had hieroglyphics… The frame of this portal acted like a wormhole from point A to point B. [Timestamp 15:45]

He described the portal as very similar to the surface of a Moon Pool, where rather than moving through it into water, one walks through the vertically aligned portal. He described it as follows:

“I’m sure you’ve seen the movie Stargate…. Exactly same thing except the frame is square.” [Timestamp 17:48].

Similarly, Emery Smith, a former US Air Force Surgical Assistant, says that he performed portal missions for a multinational corporate alliance, and described the portals as rectangle shaped.

Spartan 1 and 2 also discussed coming Earth changes and the widespread destruction this is expected to create, and how the multinational coalition has created many staging posts around the planet in case of an emergency situation requiring the immediate planetary evacuation of personnel and resources, not unlike that depicted in the movie, 2012.

The dire scenario described by Spartan 1 and 2 is similar to earlier revelations of Goode and others who disclosed foreknowledge possessed by secret space program leaders about a coming Solar Flash event and/or pole shifts, both geomagnetic and geophysical.

Many of the revelations of Spartan 1 and 2 corroborate earlier claims by Goode, William Tompkins, Pete Peterson, Emery Smith and other insiders who have bravely come forward to share their knowledge of secret space programs and the role of Antarctica in these operations.

The testimonies of Spartan 1 and 2 shed a lot of light on the multinational coalition behind these secret space programs, which can be traced to signatories of major international treaties such as the Antarctic Treaty and the International Space Station Intergovernmental Agreement.

In Antarctica’s Hidden History (2018), evidence was presented that the signing of the Antarctic Treaty was used as a cover for secret agreements reached between the Eisenhower administration and a breakaway German nationalist group in Antarctica. This led to the start of extensive cooperation between US and European companies, especially German companies linked to the breakaway Antarctic group.

Both Spartan 1 and 2’s testimonies corroborate that such a coalition had indeed been established and that Antarctica was a hub for its subsequent operations, which culminated decades later with the emergence of a multinational space fleet emerging from the end of the Cold War and the signing of the International Space Station Intergovernmental Agreement.

Linda Moulton Howe’s interview series of Spartan 1 and 2 cast is vitally important in understanding the major nations and governmental agencies involved in secret space programs, off-world activity and what may lie in the future for our planet itself.