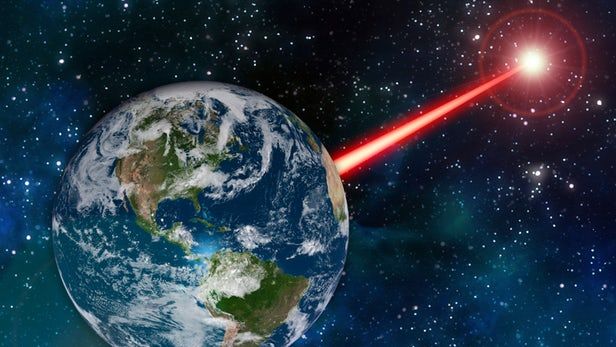 If Aliens Are Flashing Laser Beams at Us, We Now Have a Way to Detect Them

• The $100 million 10-year project funded by Russian billionaire Yuri Milner, called the  “Breakthrough Listen” project, is the most extensive SETI (Search for Extraterrestrial Intelligence) program in history. The project, which began in 2015, has surveyed over 1,000 stars within 160 light-years away from Earth for signs of alien radio signals, with no positive results.

• ‘Breakthrough Listen’ announced that its team will begin looking for new signs of alien technology using the Very Energetic Radiation Imaging Telescope Array System (VERITAS), consisting of four 12-meter optical telescopes at the Fred Lawrence Whipple Observatory in Amado, Arizona. Using VERITAS, astronomers will begin scanning the night sky for nanosecond flashes of light, known as “fast optical pulses”, from nearby stars indicating a new class of alien communication. Said Andrew Siemion, director of Berkeley’s SETI Research Center, “Optical communication has already been used by NASA to transmit high-definition images to Earth from the moon, so there’s a reason to believe that an advanced civilization might use a scaled-up version of this technology for interstellar communication.”

• VERITAS searched for such laser pulses from the mysteriously dimming Tabby’s Star after some speculated there could be an alien megastructure surrounding it. If Tabby’s Star pointed powerful lasers at the Earth, VERITAS could detect them. Less powerful lasers could be detected from closer star systems. David Williams, a member of the VERITAS and professor of physics at the University of California, Santa Cruz, said, “It is impressive how well-suited the VERITAS telescopes are for this project, since they were built only with the purpose of studying very-high-energy gamma rays…”.

• At the VERITAS initiative’s launch, physicist Stephen Hawking said, “[I]n an infinite universe, there must be other occurrences of life… [P]erhaps intelligent life might be watching these lights of ours… Or do our lights wander a lifeless cosmos, unseen beacons announcing that, here on one rock, the universe discovered its existence?”

• SETI’s Russian benefactor, Yuri Milner says, “[O]ur philosophy is to look in as many places, and in as many ways, as we can. VERITAS expands our range of observation even further.”

Are aliens using super powerful flashlights to get our attention? Astronomers think there’s a chance they are.
Since the invention of the radio, humans have been silently listening to the stars, wondering if we are alone in the universe. But if intelligent alien life does exist, the extraterrestrials could be using other forms of technology to communicate. Astronomers are beginning to not only listen to the cosmos but also gaze toward it for other signs of alien tech: laser beams.

“When it comes to intelligent life beyond Earth, we don’t know where it exists or how it communicates,” Yuri Milner, billionaire particle physicist and founder of Breakthrough Listen, said in a statement. “So our philosophy is to look in as many places, and in as many ways, as we can. VERITAS expands our range of observation even further.”

Using VERITAS, astronomers will begin scanning the night sky for nanosecond flashes of light from nearby stars. Like a lighthouse beacon for the cosmos, these brief pulses of optical light would outshine any nearby stars and could indicate a method of alien communication.