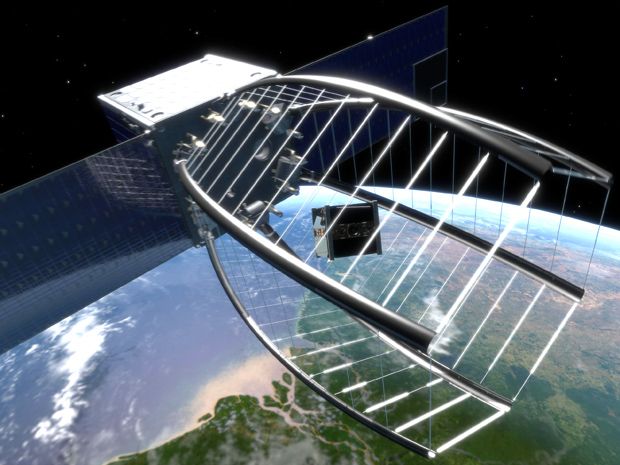 • The time has come for us to clean up our mess. So the European Space Agency has hired Swiss startup ClearSpace to remove the first item of space debris in 2025 for $103 million. More importantly, it will herald the beginning of an entirely new space industry of removing the 22,300 (at last count) pieces of debris currently in low earth orbit. The presence of useless machine parts traveling at up to 17,400 miles per hour creates a dangerous environment for satellites, astronauts, and possibly even the International Space Station.

• This particular useless piece of debris is the 247-pound Vega Secondary Payload Adapter (or Vespa), which has been circling in low earth orbit since 2013.

• The ClearSpace mission will test the concept of a “conical net” that will engulf the Vespa payload adapter (as pictured above). This will require unimaginable precision. Slight miscalculations could make the target object bounce out before the net can close or even cause a serious collision. With its cargo secured, the ClearSpace spacecraft will simply fall into Earth’s atmosphere and burn up on re-entry. Several other companies are developing their own concepts. RemoveDEBRIS, for example, uses a harpoon to snatch wayward objects in orbit. Only time will tell which strategy works best. Ultimately, ESA is hoping to launch “a new commercial sector in space.”

• ClearSpace is a spin-off of the commercial provider, Ecole Polytechnique Federale de Lausanne, and it will seek the help of partners in Germany, the Czech Republic, Sweden, Poland, and several other European countries.

The European Space Agency has signed a historic deal with Swiss startup ClearSpace to remove a single item of space debris in 2025. The $103 million

price tag is steep, but this mission—involving an orbiting, mouth-like net—could herald the beginning of an entirely new space industry.

The new contract, announced late last week, is unique in that the mission will involve “the first removal of an item of space debris from orbit,” according to ESA. ClearSpace, a spin-off of the Ecole Polytechnique Federale de Lausanne (EPFL), is the commercial provider for this mission, and it will seek the help of partners in Germany, the Czech Republic, Sweden, Poland, and several other European countries.

The target in question is the Vega Secondary Payload Adapter (or Vespa), which has been circling in low Earth orbit (LEO) since 2013. This 247-pound (112-kilogram) payload adapter successfully dispatched a Proba-V satellite to space, but, like so many other items in LEO, it currently serves no purpose, presenting a potential hazard to functioning satellites and possibly even the International Space Station.

€86 million (USD $103 million) seems like an awful lot of money to spend on the removal of a single item of space debris, but ESA is making an important investment. The technology required for the ClearSpace-1 mission, in which a spacecraft will “rendezvous, capture, and bring down” the Vespa payload adapter, will likely be leveraged in similar future missions (assuming this particular strategy will work). Ultimately, ESA is hoping to launch “a new commercial sector in space.”