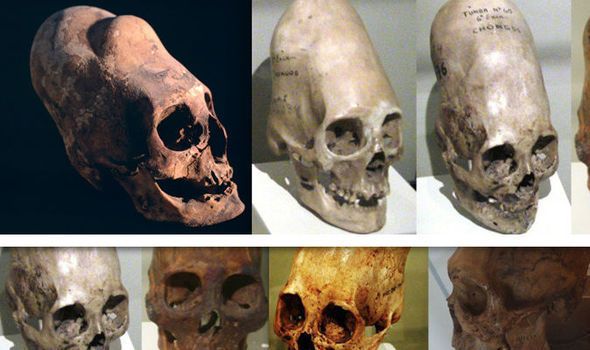 • In 1928, archaeologist Julio Tello discovered more than 300 odd skeletal remains in a complex grave system on the desert peninsula of Paracas, on the southern coast of Peru. The skulls were unusually elongated. These became known as the “Paracas skulls”.

• The Paracas History Museum, in conjunction with the Peruvian Government, recently conducted DNA tests on these Paracas skulls. They scientists have now concluded that these skeletons are from another human sub-species that first emerged from the area of the Caucasus Mountains between the Black Sea and the Caspian Sea, where other similar skulls have been found, 3,000 years ago. The museum’s director, Brian Foerster, has accepted that they are human in origin, and they somehow migrated to Peru.(see 6:05 minute YouTube video below)

• Foerster goes on to say that the Paracas skulls are “… structurally different and only have one parietal plate as opposed to the two normally found in human skulls. …You could say, in some ways… they were a mix or… hybrid of different people.” But it is certain that the skulls’ elongation is due to genetics and not by intentional cranial deformation by intentional binding, because the cranial volume of the Homo-Sapiens-Sapiens-Paracas is 25 per cent larger and 60 per cent heavier than that of a conventional human skull.

• [Editor’s Note] It sounds like these mainstream scientists concluded that this had to be a new human sub-species indigenous to the Earth according to the generally accepted scientific principle that there’s no such thing as extraterrestrials. Nothing in the given evidence contradicts the theory that they could be remnants of an Anunnaki species that was stranded on the Earth after the pole shift in 12,000 BC that shifted Atlantis to the South Pole to become Antarctica. This makes more sense than a wildly deformed human sub-species that migrated 15,000 miles from the Caucuses eastward to Peru at the beginning of the Iron Age.

Researcher Brian Foerster initially thought the discovery would not fit into the “known evolutionary tree”.

The Paracas skulls were discovered on the desert peninsula of Paracas, on the southern coast of Peru, by native archaeologist Julio Tello in 1928.

In 2015, discussing earlier DNA tests on the remains, he said: “The mitochondrial DNA (from the mother) presented mutations unknown to any man, primate or any other animal and the mutations suggested we are dealing with a completely new human-like being, very distant from Homo sapiens, Neanderthals or Denisovans.

“I am not sure it will even fit into the known evolutionary tree.”

Research by skeptics later uncovered that those involved had a history of involvement and belief in research into paranormal subjects such as the Yeti and so-called alien hybrids, an alleged cross breed between humans and aliens.

Skeptics argue the skulls are just another example of intentional cranial deformation, as seen among many ancient South American tribes.

Now Mr Foerster, who is director of the Paracas History Museum, has released details of DNA tests he said were carried out in conjunction with the Peruvian Government and he appears to now accept they were probably human in origin.

In two video updates about the DNA, Mr Foerster made no mention of extraterrestrials.
He described how the Paracas skulls appeared to share DNA links with other elongated skulls found between the Black Sea and the Caspian Sea.

Mr Foerster believes the elongation is not just caused by artificial cranial deformation, but rather by genetics with some of the elongated skulls cranial volume being up to 25 per cent larger and 60 per cent heavier than conventional human skulls.

He says this means that they could not have been intentionally deformed through head binding or flattening, as cranial deformation can change the shape but does not alter the volume or weight of a skull.
Speaking at the Elongated Skulls Symposium in Los Angeles, Mr Foerster said: “What it does show for sure is that the Paracas elongated skull people were not 100 per cent Native American.

“They were a mix or even you could say, in some ways, a hybrid of different people.

“Their blood types are very complicated as well, they should be blood type O if they’re 100 percent Native American and that’s not the case.

“We are likely looking at a sub-species of humanity as regards to the Paracas. It seems to be a lot of DNA evidence from extreme eastern Europe and extreme western Asia.

“More specifically I’m talking about the area in between the Black Sea and the Caspian Sea where ancient elongated skull people lived I think about 3,000 years ago.

“So I think we are looking at a migration pattern starting in the Caspian Black Sea area and then entering through the Persian Gulf and then moving eastwards eventually winding up on the coast of Peru.”

He added: “It appears that the largest elongated skulls on the planet have been found, A in Paracas, Peru and B in the Caucasus area in between the Black Sea and the Caspian Sea.

“So my theory is that there was a sub-species of human which we are going to be eventually calling Homo-Sapiens-Sapiens-Paracas, and they were living in the area in between the Caspian and Black Sea.
“They were invaded by somebody and so they were forced to flee.”

Archaelogist Mr Tello found more than 300 of the odd skeletal remains in a complex grave system in 1928.

Scientists say it was the most extreme example of skull elongation, a deformation practice carried out by several ancient cultures by binding infants heads through pieces of wood, ever found.

Many conspiracy theorists remain convinced they must have been the skulls of visiting aliens.