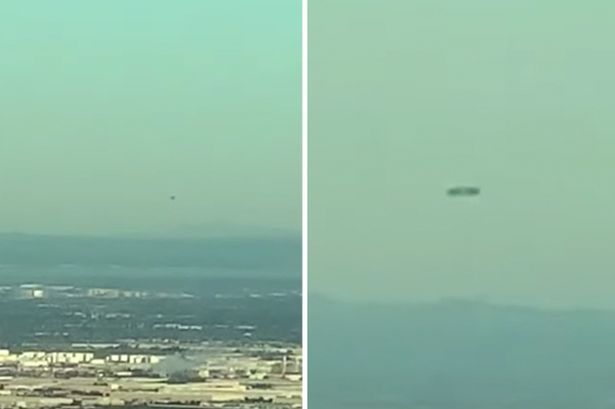 • On December 28th, a cigar-shaped craft ” glowing from the inside ” was captured on video hovering just off of a cliff over a valley near the Sky Harbor Airport in Phoenix, Arizona. The UFO then hurtles through the Phoenix sky, shifting slightly in the air, revealing its bizarre shape. “It’s been up there since we’ve been up here, I don’t know what the hell it is,” the camera man says. “It’s not a plane.” (see 13:48 minute video below)

A cigar-shaped UFO has been capturing hovering over an Arizona airport in the final sighting of 2019.

Throughout 2019, scores of tic-tac-shaped UFOs have been captured lurking in the skies, leaving many pondering what they are.

A former US intelligence officer told Daily Star Online many sightings have been documented near disaster-struck locations, “connecting” them to mega earthquakes.

Only months ago, a cigar-shaped craft ” glowing from the inside ” was captured hurtling through the Las Vegas sky.

And the most recent footage has fuelled the ever burning fire of conspiracy.

The clip, which was uploaded by YouTube conspiracist Disclose Screen The Grimreefar, has been viewed by more than 1,000 people in only a couple of days.

In the clip, filmed off a cliff on December 28 above Phoenix Sky Harbor Airport, Arizona, US, a bizarre black object appears to hover over a valley.
The clip, which lasts for almost 14 minutes, captured the object seemingly shifting slightly in the air, revealing its bizarre shape.