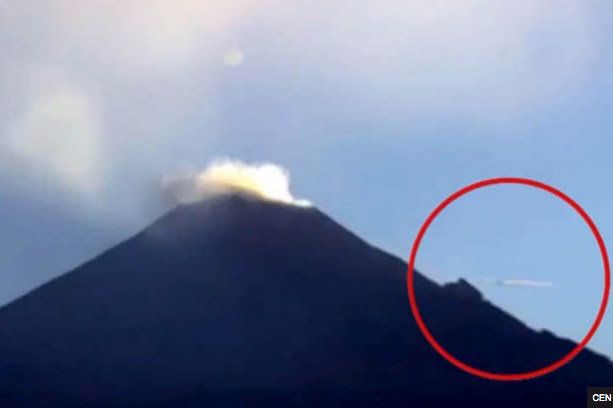 • Sightings of alien craft around volcanic eruptions are reportedly on the rise. UFO hunters are convinced that witness accounts of bright, pulsating light, caught around the active volcanos over Yellowstone, in El Salvador, and the Colima volcano in Mexico is evidence UFO activity at these places.

• “When a medium volcano erupts it releases around 27 megatons of thermal energy. That’s a lot. Could it be that these mysterious crafts have found a way to reap the energy that is released during these events?” asks a writer on Livingist.com.

• Nigel Watson, author of the UFO Investigations Manual, says that tectonic strains in the Earth’s crust produce enough energy to naturally create columns of electrical energy and glowing balls of light in the atmosphere. Michael Persinger and Gyslaine Lafrenière who made a statistical study of the correlation between UFO sightings and seismic-related locations, say that EM fields of these type of UFOs can trigger hallucinations or trance states in people who get to near to them, which “explain the many stories of ‘alien’ abductions and other strange encounters that are experienced after a witness has seen a light in the sky.”

Reported sightings of alien crafts around volcanic eruptions are on the rise, according to numerous alien conspiracy websites.

While a glowing sphere was reportedly spotted over the Yellowstone volcano in the US in February, another was spotted last year in El Salvador in September.

In January 2017, alien chasers claimed a new video appeared to show a UFO burst into a ball of light after “leaving a volcano” while in 2016, there were numerous other stories on UFOs flying over active volcanos.

UFO hunters are convinced that witness accounts of bright, pulsating light, caught around the active volcanos is evidence their activity is within the nature of Earth.

Writing in Livingist.com, an author said: “When a medium volcano erupts it releases around 27 megatons of thermal energy. That’s a lot. Could it be that these mysterious crafts have found a way to reap the energy that is released during these events?”

Other UFO bloggers such as Scott C Waring, who runs ufosightingsdaily.com made wild claims about alien monitoring seismic activity, or even triggering volcanic eruptions and earthquakes.

Mr Waring said of an alleged UFO sighting by the erupting Colima volcano in Mexico: “The UFO is long, and cigar-shaped much like many of the past UFOs seen around Mexican volcanoes on live cams.

“The UFO could not leave from the mouth since there was an eruption, so they took a side path.”