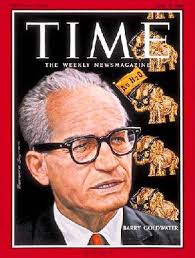 Arizona Senator Barry Goldwaterâ€™s collection of 143 pages of UFO letters has now been posted. Goldwater, a USAF reserve General, who also sat as the Chairman of the Senate Intelligence Committee had a long standing interest in the UFO subject.

The collection of letters include many letters that talk about his attempt to get access to the â€œblue roomâ€ at Wright Patterson Air Force Base where he was told by his long time friend General Curtis Lemay that he couldnâ€™t go in and Goldwater certainly couldnâ€™t go in either.

The collection also contains letters with UFO researchers such as Ron Regehr, Dr. Steven Greer, Dr. James McDonald, Lee Graham, and Don Berliner. There is also a key letter written to Goldwater by Marie Galbraith who directed the â€œbest Available Evidenceâ€ report that was prepared for Laurance Rockefeller in 1996.

Three documents not pulled from the collection have been added to give context to the documents in the Blue Room section of documents. One was a section of an April 25, 1988 New Yorker magazine article where Goldwater is quoted as saying that he was getting 100 calls a year from people asking him to look into the Blue Room rumor. The second two documents consist of a FOIA (and reply) made by researcher Bill Moore to WPAFB on the Blue Room. Missing (to be added shortly) is a â€œBlue Room Radar Scopeâ€ document that Bill Moore obtained from the Falcon that was attached to the FOIA.

Also to be added in the near future is a reply to Lee Graham from Goldwater in 1996. Many UFO related letters were filed under people names instead of the UFO files so more records will be added as researchers learn of the collection and add letters.

A second collection of Goldwater UFO related letters will also be posted shortly. These letters contain Goldwater correspondence with famous people rumored to have been involved in UFOs. These people include General Curtis LeMay who was involved in the Blue Room event, Bobby Ray Inman who was rumored to have headed up the UFO back-engineering efforts for the US government (and who Goldwater promised to set up a meeting in 1994 for Dr. Greer), Edward Teller, and former carter CIA Director Stansfield Turner. Although the letters are interesting none deal with the UFO subject.

The documents are at