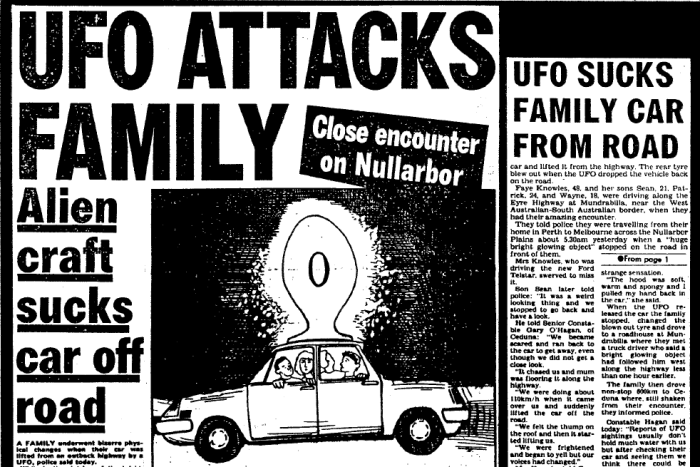 • Paul Curnow of South Australia’s Astronomical Society says that UFO sightings are common in South Australia. UFO reports in the Aussie state can be traced back to the beginning of the twentieth century. But the sightings rapidly increased after WWII. Here are a few random examples.

• In 1947, five metallic objects were seen by three people working at the Commonwealth railways in Port Augusta. A government astronomer was called in, but couldn’t explain the sighting.

• On January 22, 1954, the Bunyip newspaper reported three people had sighted a pure white flying saucer over Gawler. SA, travelling at a terrific speed.

• On February 4, 1973 in Kimba, SA, on the remote Eyre Highway, four people in three separate cars all spotted in the scrub an orange rectangle similar to an illuminated door with a being standing inside the doorway.

• In 2006 in South Australia’s Flinders Ranges, scores of people many kilometers apart saw a large sphere hurtling through the air.

• In the early hours of January 20, 1988, Faye Knowles and her adult sons Patrick, Wayne and Sean were driving along the remote Nullarbor Plain from Perth to Melbourne when a UFO tormented them for 90 minutes. A large glowing sphere chased them down the highway, landing on their roof. It picked their car up off the road, shook it violently and dropped it back down on the road rupturing a tire. Sean Knowles put his foot on the accelerator as his mother screamed, but their voices were distorted like time was slowing down. The object emitted some sort of black soot that covered the car.

• The Knowles family made it to the Ceduna police department and gave their report, along with their evidence of a severely dented car with black soot all over it. When Ceduna police phoned SA police to shed some light on the matter, Senior constable Mick Abbott replied, “If you stay on the line, I’ll transfer you to agents Mulder and Scully from our X-Files division.” The police eventually chalked it up to the car’s tire blown at a high rate of speed, and brake dust covering the car.

• [Editor’s Note] Judge for yourself whether the family was telling the truth in the classic video below.

It’s a question many of us have asked ourselves: are we alone in the universe?

From flying saucers to balls of light rocketing through the sky, South Australia has had its fair share of reported UFO encounters.

One avid ABC reader has asked us to delve into the history of the state’s major cases, as part of our Curious Adelaide campaign.

So we dusted off some of South Australia’s oldest X-Files to find answers.

We’ll start in the outback, where a traumatised family was allegedly lifted off the ground by aliens.

It was still dark in the early hours of January 20, 1988, when the Knowles family was driving along the remote Nullarbor Plain.

The seemingly mundane trip from Perth to Melbourne quickly turned to terror when they encountered an unidentified flying object that tormented them for 90 minutes.

A large glowing object “like a big ball” chased Faye Knowles and her adult sons Patrick, Wayne and Sean down the highway, before landing on their roof and plucking them into the air.

“It apparently picked the car up off the road, shook it quite violently and forced the car back down on the road with such pressure that one of the tyres was blown,” a police spokesman told media at the time.

In a state of shock, Sean Knowles put his foot on the accelerator as his mother screamed but, according to reports, their voices distorted like time was slowing down.

“I wound down the window and I felt this thing on the roof… all of this smoke stuff started coming into the car, the car was covered in black stuff,” Faye Knowles told reporters after the incident.
“It was a small light and all of a sudden it became big like this, like a big ball.
“We thought we were dying, then we got out the car and we hid behind a little tree and the bushes and it couldn’t find us.”

The family eventually made it to Ceduna and reported the bizarre events to police who took the report seriously, given the state of the car, which was dented and had dust over it.

The story made headlines around the world with sceptics and believers alike trying to make sense of what happened on that lonely stretch of road.

UFO reports in the state can be traced back to the beginning of the twentieth century but it wasn’t until the early Cold War that they started appearing all over the place.
Rockets were a new invention, originally for military purposes, that made the stars seem closer than ever before.