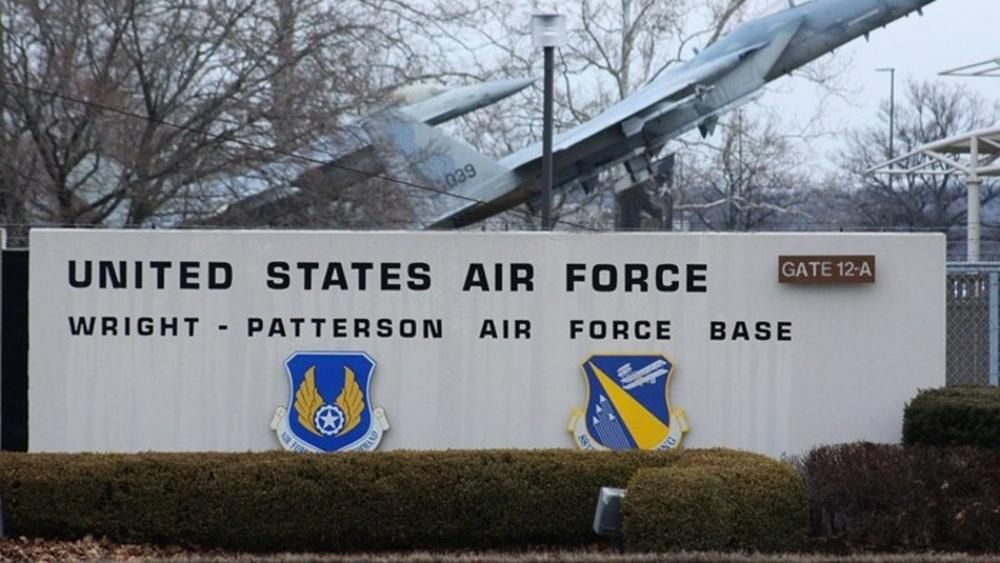 • Like Area 51, the legend of Hangar 18 at Wright Field – now Wright-Patterson Air Force Base – outside of Dayton, Ohio is one of flying saucers, extraterrestrial remains and even captured aliens secretly being held in a sealed and guarded warehouse called ‘Hanger 18’ or “the Blue Room”.

• Wright Field was home to the Air Force’s UFO investigation effort, Project Blue Book, from 1951 to 1969. Senator Barry Goldwater, Republican nominee for president in 1964, notoriously tried to gain access to the Blue Room through General Curtis LeMay, and was soundly rebuked. In 1974, a UFOlogist named Robert Spencer Carr publicly claimed that the Air Force was hiding “two flying saucers of unknown origin” inside Wright-Patterson’s Hangar 18. Carr claimed to have a high-ranking military source who saw the bodies of 12 alien beings as autopsies were being performed on them. A 1980 movie, Hangar 18, helped to cement the legend of Wright-Patt as a hotbed of the government’s UFO-related activities.

• The stories of Wright-Patterson go back to its alleged involvement in the cover-up of a UFO crash near Roswell, New Mexico in 1947. At the time, a Roswell Army Air Field press release said the Army had recovered a “flying disc” and sent it on to “higher headquarters” at Fort Worth. But Fort Worth immediately recanted the story saying it was only a weather balloon. Many UFO researchers believe that some of the debris from Roswell were sent to Wright Field and stored in Hangar 18.

• One military pilot, Oliver Henderson, told his wife that he flew a plane loaded with (flying saucer) debris, along with several small alien bodies, from Roswell to Wright Field. Children of another pilot, Marion “Black Mac” Magruder, claim that their father saw a living alien at Wright Field in 1947 and told them “it was a shameful thing that the military destroyed this creature by conducting tests on it.”

• The Air Force has categorically denied any of the rumors tying the Ohio base to UFOs and aliens. They even deny there is a ‘Hanger 18’ at Wright-Patt, although there is a ‘building 18’. In an official statement in 1985, the Air Force said, “There are not now, nor have there ever been, any extraterrestrial visitors or equipment on Wright-Patterson Air Force Base.”

• And as to the crashed saucer outside of Roswell which the Army/Air Force later claimed was a weather balloon? In 1994 the Air Force changed its story, again, saying that it was actually debris from a surveillance “balloon device” (called “Project Mogul”) that was designed to spy on nuclear research sites in the Soviet Union. (see July 1994 USAF Roswell Report featuring the Project Mogul balloon explanation here)

Base) outside Dayton, Ohio, ranks up there alongside Area 51 as a subject of enduring speculation.

Many of the rumors surrounding Wright-Patt, as it’s known for short, involve what might have gone on inside a particular building, known as Hangar 18. UFO enthusiasts believe the government hid physical evidence from their investigations—including flying saucer debris, extraterrestrial remains and even captured aliens—in this mysterious warehouse, specifically inside a sealed, highly guarded location dubbed “the Blue Room.”

The legend of Hangar 18 goes back to the supposed crash of a UFO in the desert near Roswell, New Mexico, in July 1947. According to a press release issued by the Roswell Army Air Field (RAAF) at the time, their personnel inspected the “flying disc” and sent it on to “higher headquarters.” A subsequent press release from an Air Force base in Fort Worth, Texas (assumed to be the aforementioned headquarters) claimed the disc was a weather balloon—a claim the Air Force acknowledged was untrue in 1994, admitting it had been testing a surveillance device designed to fly over nuclear research sites in the Soviet Union.

But in addition to Fort Worth, many UFO researchers believe some of the materials from Roswell were also transported to Wright Field after the crash and stored in Hangar 18, based on unsubstantiated reports from former military pilots. One, Oliver Henderson, reportedly told his wife that he flew a plane loaded with debris, along with several small alien bodies, from Roswell to Wright Field. According to the children of another pilot, WWII ace Marion “Black Mac” Magruder, their father claimed to have seen a living alien at Wright Field in 1947 and told them “it was a shameful thing that the military destroyed this creature by conducting tests on it.”