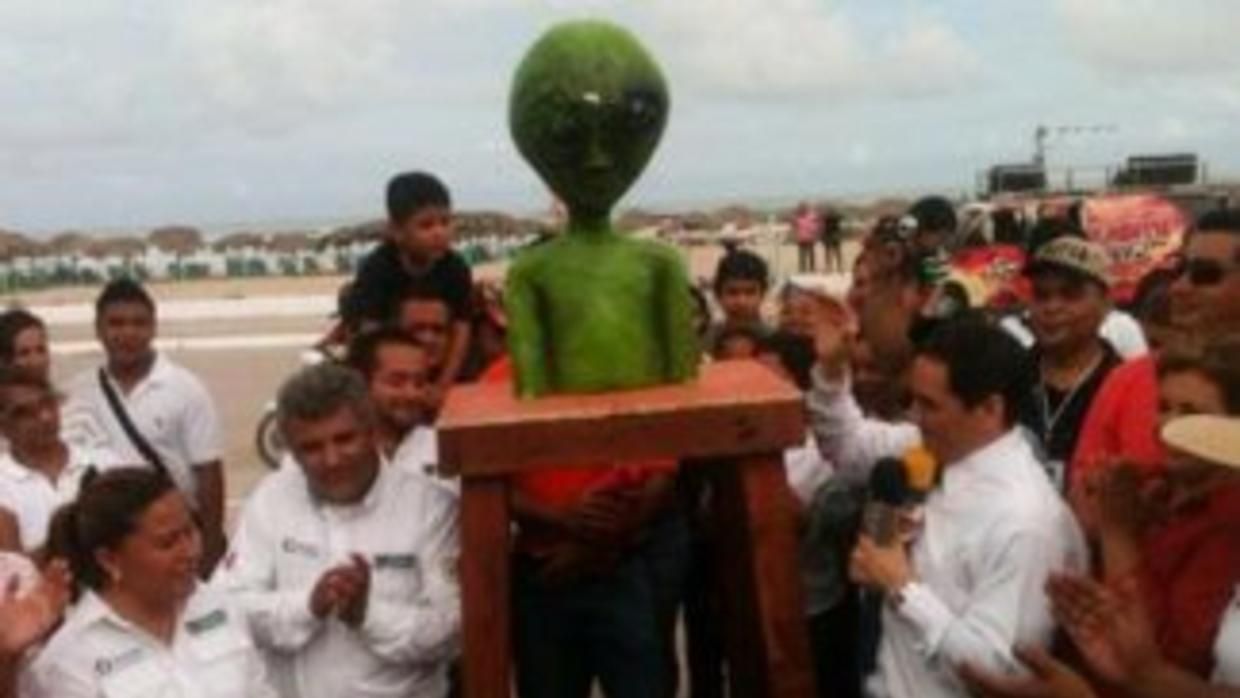 • During the hurricane season, cities along the Gulf of Mexico coastline brace for the worst. But for the past 54 years, whenever a hurricane was heading straight for the Mexican coastal towns of Tampico, Altamira and Madero, the hurricane would suddenly shift to the north (to the chagrin of Texas and Louisiana). The director of Civil Protection in Madero, Romel Martínez, says that this phenomenon is known as “tampicazo.” “We take all the precautions, we do our job… We even have our temporary shelters ready. This is not the first time this has happened to us, it has happened many times before,” says Martínez.

• A group of ufologists from the Association of Scientific Research on UFOs in nearby Tamaulipas believe that the reason for the lack of hurricane activity in this section of the Mexican coastline is because an extraterrestrial base is located underneath the beach there. The associations’ president, Juan Carlos Ramón López Díaz, said he has visited the alien base, known as Amupac, during an astral trip. López Díaz thinks that the intergalactic visitors probably established the base in the mid-1960s, after Hurricane Inez devastated the area in 1966. Ever since then, the beach has been under extraterrestrial protection. Many locals claim to have seen flying saucers and even to have been abducted in the region.

• Some say that there is an unusual structure accompanied by a magnetic field buried at the bottom of the sea near the beach. This is the technology that “the visitors” use to deflect big storms. Tampico historian Marco Flores told The Guardian newspaper, “If science doesn’t give us any explanation, we’ll get it by magic.”

• The idea that the Tampico coastline has an alien base underneath it has caught on so well with the populace that local businesses have capitalized on the alien presence. In shops along the Miramar Beach boardwalk you can find all kinds of Martian-shaped figurines and UFO images for sale. A local television station even proclaimed the last Tuesday in October as the ‘Day of the Martian’, with a green Martian presiding over the beach. López Díaz attributes the overnight popularity of the UFO culture in Tampico to “the collective mind”.

• Rosario Romero of the National Autonomous University of Mexico blames the lack of hurricane activity along this part of the Mexican coastline on prevailing westerly winds or high pressure subtropical systems, which are driving the hurricanes towards the southern coast of the United States. Romero notes that in 2013, Hurricane Ingrid caused significant flooding in the region. “We now have advanced monitoring systems and numerical models that allow us to predict the intensity and trajectory of a storm,” said Romero, “but trajectories still vary widely depending on those wider weather conditions.”

The hurricane season arrives in Mexico as the country barely sticks its head out from under the coronavirus pandemic. While many are preparing for the worst dystopia in recent times, in the cities of the Gulf Coast, some people claim to feel protected from tropical storms like Cristina — a storm meteorologists announced will arrive in Tamaulipas in the form of showers. The reason?

An extraterrestrial base located, residents say, under Miramar Beach, in the town of Ciudad Madero and

also in Tampico, whose intergalactic owners have been diverting cyclones for more than half a century.

That is the opinion of a group of ufologists from the Association of Scientific Research on UFOs in Tamaulipas (Aicot), whose president, Juan Carlos Ramón López Díaz, said he visited the alien base, known as Amupac, during an astral trip. However, many in this region claim to have seen flying saucers and even to have been abducted by mysterious guardians of the climate.

According to López and his collaborators, the Amupac base must have been established in the mid or late 1960s, shortly after Hurricane Inez caused countless damage in the Caribbean, Bahamas, Florida and also in Mexico, where 74 people died.

But what really protects this region are not the aliens themselves, but the faith of neighbors, who have

turned the shops on the Miramar Beach boardwalk into a sanctuary where you can buy all kinds of glass figurines and Martian-shaped murals. They even have their big day, the Day of the Martian, which is celebrated on the last Tuesday in October, even though it does not exist and, like the green Martian that presided over the beach in 2013, was the idea of a local television station.

“The collective mind is charged with this concept, so it generates a large force field of repulsion,” López told The Guardian.

There are also those who talk about magnetic fields and a structure with bars of different material buried at the bottom of the sea, near the beach, which deflects storms on the advice of “the visitors.” Or those that accept the inexplicable and blessed phenomenon without giving it too much thought, as Tampico historian Marco Flores does,

“If science doesn’t give us any explanation, we’ll get it by magic,” he told The Guardian. “Fantasy is always more attractive than reality.”