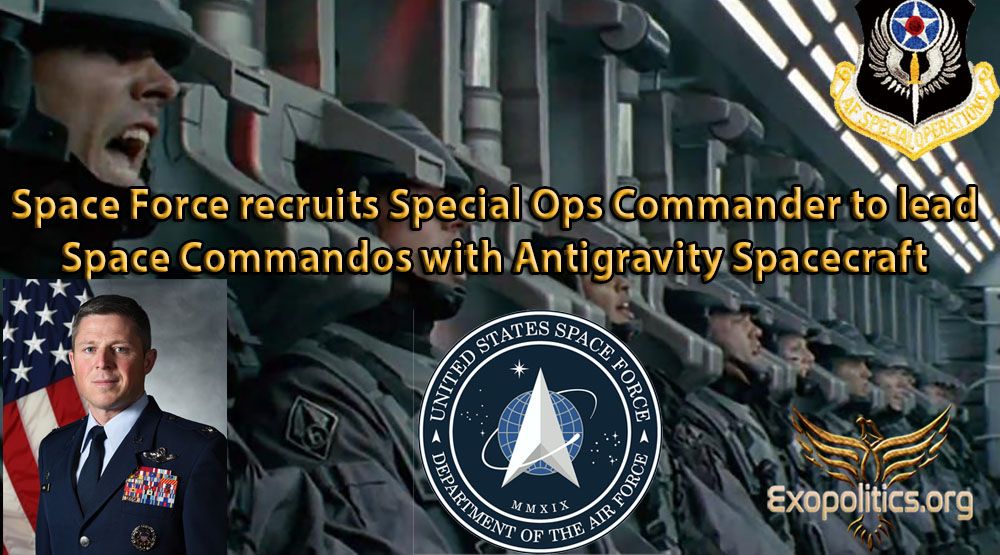 The United States Space Force has just recruited and promoted the Commander of the Air Force’s 1st Special Operations Wing who had led covert operations around the world and in space. This clears the way for antigravity vehicles that were secretly deployed out of select Air Force bases to be transferred over to Space Force and for many “Air Commandos” to be renamed as “Space Commandos”.

Colonel Michael Conley who headed the Air Force’s 1st Special Operations Wing was promoted to Brigadier General in his new assignment as second in charge of Space Operations Command that currently makes up the bulk of the newly created Space Force with nearly 16,000 personnel.

The personnel are distributed over five Air Force bases – Vandenberg, Peterson, Patrick, Schriever, and Buckley – which according to the head of Space Force, General Jay Raymond, are soon to be renamed space bases.

In his previous assignment at Air Forces Special Operations Command (AFSOC), as head of one of the Air Force’s eight special operations wings, Conley led covert personnel known as “Air Commandos” which the AFSOC website describes as follows:

We are America’s Air Commandos
We are Air Commandos, quiet professionals, Airmen personally committed to our craft. As the air component of U.S. Special Operations Command, we are capable and ready to conduct special operations anytime, anyplace. We are disciplined professionals dedicated to continuous improvement. Innovative and adaptable, our rigorous and realistic training helps us manage uncertainty and mitigate risk. By training smarter and harder than others, we define our limits, and learn when and where to push them. Inherently joint, we build credibility through habitual relationships that sustain us in the fight. We believe that one person makes a difference. And as our Air Commando heritage demands, we remain culturally bound to get the mission done, or find a way where none exists.

Conley led the 1st Special Operations Wing, from 2018 to 2020 at Hurlburt Field, in Florida. It was during his leadership that a number of triangle and rectangle-shaped antigravity vehicles were photographed near MacDill Air Force Base, home of Pentagon’s Special Operations Command.

The photographer, who uses the pseudonym JP and currently serves with the US Army, says that he was taken aboard several of these vehicles, which he photographed on several occasions with the active encouragement of covert Air Force personnel.

JP witnessed personnel on a rectangle-shaped antigravity vehicle who wore patches of Air Force Special Operations. The same patches are worn by the special operations wing that was led by Conley at Hurlburt Field, which worked closely with MacDill’s Special Operations Command in covert operations around the world and in space.

This raises the distinct possibility that Conley was involved in the decision to allow antigravity vehicles manned by Air Force Commandos flying near MacDill AFB to be photographed by JP.

If so, then Conley was actively part of the covert disclosure initiative by the USAF to reveal its arsenal of antigravity vehicles to the general public, which I described in detail in the book, US Air Force Secret Space Program (2019).

This possibility gives added significance to Conley’s appointment and promotion to Space Force, and strengthens claims that the Space Force was created with the intent of revealing the Air Force’s secret space program (SSP).

Regardless of the question of whether Conley was part of an Air Force initiative to publicly begin acclimating the public to its secret space program in 2018, his new position as deputy commander of Space Force’s “Space Operations Command” means that he is in charge of transferring relevant Air Force covert aerospace operations over to Space Force.

General Conley will now oversee the reassignment of “Air Commandos” to “Space Commandos”, and transfer covert space assets used by the Air Force’s “1st Special Operations Wing” – some of which were photographed in 2017-2018 near MacDill AFB – to Space Force.

As Space Force continues to develop with the acquisition of personnel and resources, it is expected that more of the bureaucratic structures that supported the Air Force’s SSP, will be increasingly made transparent as it is transferred over to Space Force.

General Conley and the transition of “air commandos” to “space commandos” is merely one step in a transition process, which ultimately aims to have decades-old technologies deployed by the USAF SSP to be declassified as recent acquisitions by the new Space Force. This process will simultaneously inspire the American public with the impressive technologies deployed by Space Force, boost recruitment interest in the new military service, while deflecting away from troubling questions of why such technologies were not declassified decades earlier.