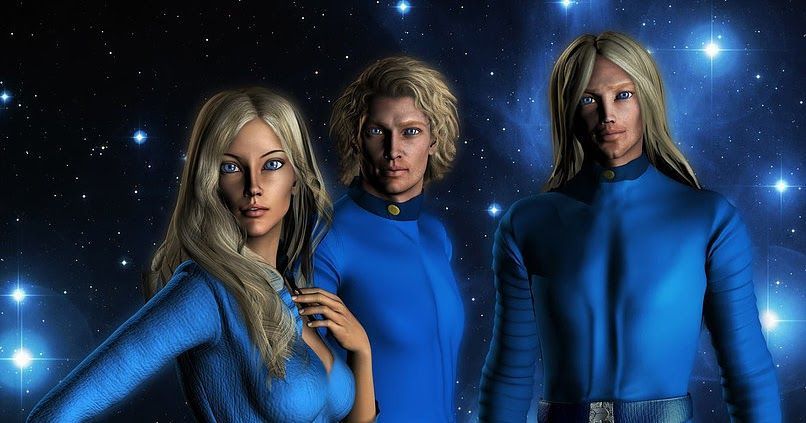 • Non-coding DNA sequences are common to all living organisms on Earth, from molds to fish to humans. In human DNA they constitute a larger part of the total genome, says Professor Sam Chang at the Human Genome Project. HGP researchers believe that 97% of the non-coding sequences in human DNA is actually the genetic code of extraterrestrial life forms.

• Non-coding sequences were discovered years ago and were originally labeled as “junk DNA” because their function remained a mystery. “What we see in our DNA is a program consisting of two versions, a big code and basic code,” says Professor Chang. He says that it is now a ‘verified fact’ that the primary DNA “big code” is a ‘program’ that was written by an advanced extraterrestrial intelligence, while the “basic code” was tailored to organisms living on the Earth and added to big code. “[G]enes by themselves are not enough to explain evolution; there must be something more in ‘the game’,” says Professor Chang.

• “Our hypothesis is that a higher extraterrestrial life form was engaged in creating new life and planting it on various planets. Earth is just one of them. Perhaps …it was a scientific experiment, or a way of preparing new planets for colonization, or [the]… ongoing business of seedling life in the universe,” says Professor Chang. The “extraterrestrial programmers” …wrote “the big code”, …made more improvements, tried again and again.” The ET DNA programmers were pressed to meet an ‘Earth project’ deadline, and “may have cut down drastically on big code and delivered a basic program intended for Earth.” This resulted in programming ‘gaps’ in DNA sequencing. Such gaps would explain the illogical growth of cancer cell masses that have their own “veins, arteries and …immune system that vigorously resists all our anti-cancer drugs”.

• Human genetic material would have been provided by human-looking extraterrestrials to enhance human evolution. Earth human’s spiritual evolutionary development has been ‘boosted’ by humans from other star systems incarnating here on Earth as “star seeds” or “star children”. ‘Contactees’ such as George Adamski, Orfeo Angelucci, George Van Tassell, Howard Menger, Paul Villa, Billy Meier and Alex Collier have described these human extraterrestrials as ‘benevolent’. Collier says that “Earth humans” are “a product of extraterrestrial genetic manipulation” by a variety of extraterrestrial races participating in this ‘human experiment’.

• So-called ‘ancient astronaut’ writers have long held that intelligent extraterrestrial beings visited and/or colonized Earth in the remote past, whereupon they upgraded the primitive hominid Homo erectus by means of genetic engineering to create the human race as we know it: Homo sapiens. Evidence for this idea is found in the improbability of Homo sapiens emerging so suddenly, and ancient myths describing human-like gods coming down from the heavens and creating mankind ‘in their own image’. Famous exponents of the ancient astronaut intervention theory are Erich von Daniken and Zecharia Sitchin.

• Exopolitics groups and independent contactees such as Alex Collier say that constituents of “Human ETs” seek to “uplift human consciousness” to “ensure that global humanity evolves in a responsible way without endangering both itself and the greater galactic community of which it is part.” Collier notes that “hostile elements” introduced competing cults and religions on Earth in order to manipulate and control humankind. Jesus Christ was a “human ET” who sought to inspire the social consciousness of humankind toward unity, not to create a divisive ‘Christian religion’. A religious ‘savior scenario’ was instilled in us to “disempower us” and allow for an elite-driven oppressive social power structure that compliments a ‘greed-oriented self-aggrandizement’ that they share with other elites from governments to business enterprises. The efforts of socially progressive human ETs have been undermined by ‘capitalists’ who exploit an oppressive agenda of greed and power. Benevolent human ETs seek to “help humanity find freedom from oppressive structures through education and consciousness raising.”

• In the 1950s, George Adamski was the first to write about extraterrestrials that had established a presence on Earth and were secretly living among the human population. Dr. Salla has written of other contactees, such as Howard Menger, who claim to have encountered extraterrestrials acting like ordinary citizens. “They apparently looked so much like us that they could get jobs, lived in neighborhoods, drove cars, and could blend in easily with the human population,” says Dr. Salla. “If Adamski is accurate in his recollections and the extraterrestrials are telling the truth, then it would appear that there could be a significant number of extraterrestrials who are living incognito among the normal population in many if not most major cities on the planet. Upon examining other contactee cases and the testimonies of whistleblowers, it does appear as though this is indeed the case.”

• The saving of Humanity from its current course of self-destruction may vitally rely on our setting aside greed-driven agendas to create a constructive dialogue in which we Earth humans view ourselves as an integral part of a much larger group of humans within this star sector, this galaxy, and this universe.

• [Editor’s Note]  Recent corroboration that extraterrestrial humans live within our societies, unnoticed, comes from the late William M. Tompkins in his books Selected by Extraterrestrials Vol. 1 (2015) and Vol. 2 (2020). Tompkins worked with the US Navy and top aerospace companies throughout his career starting in the late 1940s. He states unequivocally that, from the beginning, many of the top aerospace engineers and executives had brilliant and gorgeous Nordic human female “assistants” and “secretaries” who were able to telepathically nudge the engineers with technical breakthroughs to move their research along. And for some reason, they were very highly sexualized in their dress and conversation.

Some information on message boards indicate that Dr. Sam Chang doesn’t exist. Credit for these genome research goes instead to two scientists in the former Soviet republic of Kazakstan, Vladimir I. shCherbak and Maxim A. Makukov.

A group of researchers working at the Human Genome Project indicate that they made an astonishing scientific discovery: They believe so-called 97% non-coding sequences in human DNA is no less than genetic code of extraterrestrial life forms.

The non-coding sequences are common to all living organisms on Earth, from moulds to fish to humans. In human DNA, they constitute larger part of the total genome, says Prof. Sam Chang, the group leader. Non-coding sequences, originally known as “junk DNA”, were discovered years ago, and their function remained a mystery. The overwhelming majority of Human DNA is “Off-world” in origin. The apparent “extraterrestrial junk genes” merely “enjoy the ride” with hard working active genes, passed from generation to generation.

After comprehensive analysis with the assistance of other scientists, computer programmers, mathematicians, and other learned scholars, Professor Chang had wondered if the apparently “junk Human DNA” was created by some kind of “extraterrestrial programmer”. The alien chunks within Human DNA, Professor Chang further observes, “have its own veins, arteries, and its own immune system that vigorously resists all our anti-cancer drugs.”

Professor Chang further stipulates that “Our hypothesis is that a higher extraterrestrial life form was engaged in creating new life and planting it on various planets. Earth is just one of them. Perhaps, after programming, our creators grow us the same way we grow bacteria in Petri dishes. We can’t know their motives – whether it was a scientific experiment, or a way of preparing new planets for colonization, or is it long time ongoing business of seedling life in the universe.”

Professor Chang further indicates that “If we think about it in our human terms, the apparent “extraterrestrial programmers” were most probably working on “one big code” consisting of several projects, and the projects should have produced various life forms for various planets. They have been also trying various solutions. They wrote “the big code”, executed it, did not like some function, changed them or added new one, executed again, made more improvements, tried again and again.”

Professor Chang’s team of researchers furthermore concludes that, “The apparent “extraterrestrial programmers” may have been ordered to cut all their idealistic plans for the future when they concentrated on the “Earth project” to meet the pressing deadline. Very likely in an apparent rush, the “extraterrestrial programmers” may have cut down drastically on big code and delivered basic program intended for Earth.”

Professor Chang is only one of many scientists and other researchers who have discovered extraterrestrial origins to Humanity.

Professor Chang and his research colleagues show that apparent “extraterrestrial programming” gaps in DNA sequencing precipitated by a hypothesized rush to create human life on Earth presented humankind with illogical growth of mass of cells we know as cancer.”

Professor Chang further indicates that “What we see in our DNA is a program consisting of two versions, a big code and basic code.” Mr. Chang then affirms that the “First fact is, the complete ‘program’ was positively not written on Earth; that is now a verified fact. The second fact is, that genes by themselves are not enough to explain evolution; there must be something more in ‘the game’.”

“Soon or later”, Professor Chang says “we have to come to grips with the unbelievable notion that every life on Earth carries genetic code for his extraterrestrial cousin and that evolution is not what we think it is.”