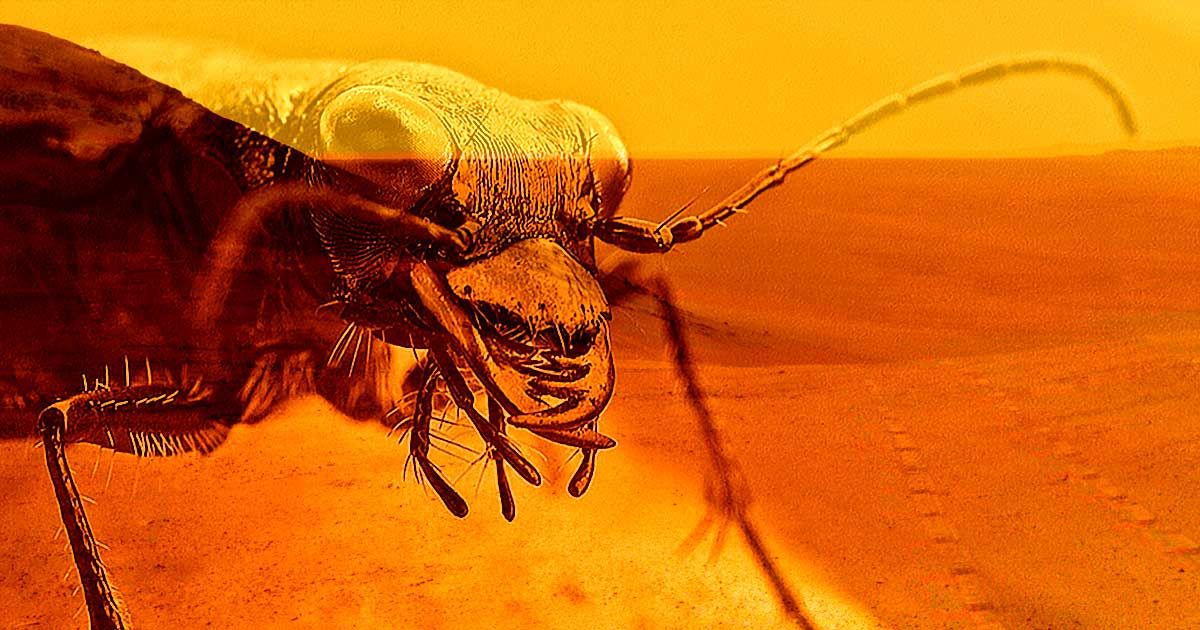 • In a press release on the Ohio University website earlier in November, Professor Emeritus William Romoser said that after analyzing images captured by NASA’s Mars rovers, the images clearly showed ‘fossilized and living creatures’ on the Red Planet’s surface. Romoser added, “There has been and still is life on Mars.” A poster of his research online suggested NASA is already ‘acquainted with Martian insect- and reptile-like creatures’ which live on Mars. That press release and the wire service that released it have now been deleted from the university website.

• Before being deleted, Romoser’s paper took the opportunity to reveal that ‘the “Red Planet” enjoys a surprising abundance of higher life forms’, including creatures resembling ‘bumblebees or carpenter bees’ as well as reptile-like animals which preyed on them. ‘The insect-like fauna observed appeared to be sheltering/nesting in caves, in burrows beneath the surface, and in specialized structures,’ Romoser wrote. ‘Other images show a fossilized creature that resembles a snake.’ ‘Once a clear image of a given form was identified and described, it was useful in facilitating recognition of other less clear, but none-the-less valid, images of the same basic form,’ said Romoser.

• Romoser has been an entomology professor at Ohio University for 45 years. He also spent nearly 20 years as a vector-borne disease researcher at the U.S. Army Medical Research Institute of Infectious Diseases. Between 1973 and 1998, Romoser authored and co-authored four editions of the widely-used textbook called ‘The Science of Entomology’. Romoser said that ‘interpretations of insect- and reptile-like creatures he described may change in the future as knowledge of life on Mars evolves, but that the sheer volume of evidence is compelling’. ‘The presence of higher metazoan organisms on Mars implies the presence of nutrient/energy sources and processes, food chains and webs, and water as elements functioning in a viable, if extreme, ecological setting sufficient to sustain life.’

• Romoser said, ‘I have observed instances suggestive of standing water… a moist bank area, and a drier area beyond’. Water on Mars, including surface water, has been detected by instrumentation on the Viking, Pathfinder, Phoenix, and Curiosity rovers. ‘The evidence of life on Mars presented here provides a strong… justification for further study.’

• [Editor’s Note]  How did this professor evade the deep state’s truth embargo in the first place?

The claim that extraterrestrial beasties are living on Mars always sounded too good to be true. Now the university which published a press release

which alleged insects had been spotted on Mars has performed a dramatic u-turn. Last week, Professor Emeritus William Romoser, an entomologist from Ohio University, said images captured by Nasa’s Mars rovers clearly show ‘fossilised and living creatures’ on the Red Planet’s surface. ‘There has been and still is life on Mars,’ Romoser said in a press release which has now been deleted from the Ohio University website as well as wire services which distribute releases to journalists. We found a poster of his research online, which is still available to read, which suggested Nasa is already ‘acquainted with Martian insect- and reptile-like creatures’ which live on Mars.

‘It appears that the “Red Planet” enjoys a surprising abundance of higher life forms,’ the paper continued. The research analysed images sent back to Earth by the Mars Rover and made several astonishing allegations. It suggested that creatures resembling ‘bees’ lived on Mars as well as reptile-like animals which preyed on them. ‘The insect-like fauna observed appeared to be sheltering/nesting in caves, in burrows beneath the surface, and in specialized structures,’ the paper continued. Rosomer’s claims made international headlines last week.