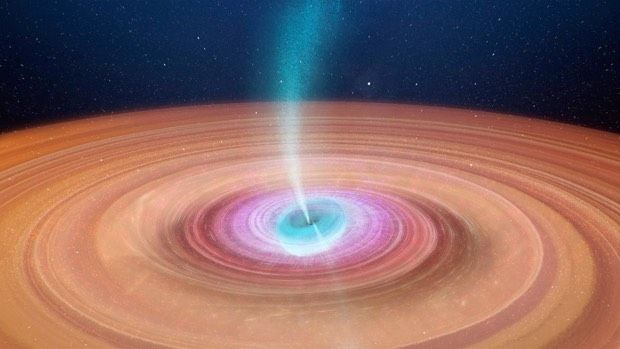 • After watching the 2014 movie “Interstellar” starring Matthew McConaughey, NASA astrophysicist Jeremy Schnittman decided to research whether exoplanets could actually sustain life by receiving radiant energy by orbiting a black hole. Schnittman concluded that it is possible.

• In a paper published in the journal arXiv, Schnittman writes: “[T]he Sun provides almost all the energy necessary for life on Earth to survive. Without it’s constant heat flux, the oceans would likely freeze over in a matter of days.” If there were ‘accretion discs’ being pushed and shoved by the extreme gravitational force of a black hole, it would create a tremendous amount of energy equal to the amount of radiant energy that the Sun provides the Earth. This accretion power outweighs anything attainable from nuclear fusion by many orders of magnitude.

• On the downside, however, Schnittman noted that the energy and radiation coming from a black hole would be potentially “lethal” to any life. Says Schnittman, “All known life forms require an energy gradient in order to survive, so an all-pervasive black-body radiation background would probably not be very conducive to complex life.”

• A star would need to have around twenty times the mass of our Sun if it is to form a black hole after its death and collapse. Our Sun is far too small to ever to turn into a black hole.

The amount of energy given off by a black hole could be enough to support life, expanding the possibilities of where humans should search for extraterrestrials. NASA astrophysicist Jeremy Schnittman based his research on the hit Hollywood movie Interstellar, in which the main character, played by Matthew McConaughey, goes in search of a habitable planet for humans to live on as Earth is dying. In the 2014 movie, the scientists discovered planets orbiting a black hole which could sustain life. Mr Schnittman wanted to test the real-life feasibility of this.

The scientist said accretion discs, made up of materials and objects orbiting a black hole, could allow life to exist.

The friction generated by these discs as they are pushed and shoved by the extreme gravitational force is so large that it can produce a tremendous amount of energy, depending on the size of the black hole.

While the Sun gives Earth energy through light and heat, the radiation and energy from the accretion discs might prove just as valuable.

Mr Schnittman wrote in the paper published in the journal arXiv: “On the down side, the Sun provides almost all the energy necessary for life on Earth to survive. Without it’s constant heat flux, the oceans would likely freeze over in a matter of days.

“But we also know that many astrophysical black holes can provide their own energy source, in the form of radiation from hot, accreting gas.

“In fact, for most observable black holes, this accretion power outweighs anything attainable from nuclear fusion by many orders of magnitude.

“So one could naturally imagine that replacing the Sun with an accreting black hole might not be the end of life on Earth after all.”