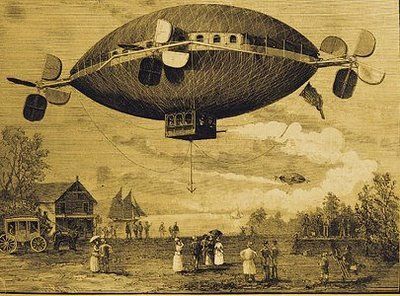 • The late 19th century was a time full of new inventions – diesel engines, electric lights, the telephone to name a few. Simple hot-air balloons had been around, but without steering or motorization. Knute Berger, a columnist for Seattle magazine claims in an October issue that a man in Goldendale, Washington built and tested an “airship” in 1895.

• In 1895, E.D. Parrott raised $500,000 to build a flying invention in Goldendale, located on the Oregon border. The craft was small and light, made of aluminum, and had propellers and a four-horsepower engine. In April 1895, Parrott successfully flew the machine 150 feet off the ground in a short circle and landed. When Parrott cancelled a second test flight in July of that year, the newspapers forgot about him. Berger found references to an E.D. Parrott who applied for patents for a propeller and carburetor in the early 1900s, but he was never credited with the first flight of an aircraft.

• Berger says that a year later were reports of cigar-shaped flying aircraft coming from the San Francisco Bay area. Then sightings began to occur all over the northwest, sweeping across the country in 1897, and creating what historians now call the ‘phantom’ or ‘mystery airship phenomenon’. People speculated that these sky objects were new inventions, alien craft from Mars, atmospheric anomalies, or outright hoaxes.

A columnist for Seattle magazine says a man in Goldendale built and tested an “airship” in 1895.

Knute Berger writes in the October issue of the publication that his fascination with the flying saucer phenomenon led him to dig into a much earlier history of UFOs. He says the whole thing started with a UFO sighting at Mt. Rainier in 1947, but he adds signs of it began during the Klondike Gold Rush.

“The late 19th century was a time of great technological change-diesel engines, electric lights, the telephone,” Berger writes. “The newspapers of the time were full of new inventions. In the 1890s, people were also looking to the skies. Hot-air balloons had been around since the late 18th century, but was it possible to build a new generation of airships that would stay aloft, transport people and goods, and be steered and motorized?”

Enter E. D. Parrott, brother of William S. Parrott, a resident of Klickitat County who garnered international fame as an artist, with one of his paintings of Mt. Hood selling in New York City for $10,000. The Parrotts were well established in the county.

Berger says in 1895 E. D. Parrott raised some $500,000 to assemble his flying invention in Goldendale. Regional media reported that a test flight of the machine in April 1895 was successful when it flew 150 feet off the ground in a short circle and landed. The vessel was small and light, made of aluminum, and had propellers and a four-horsepower engine.
A bigger test flight was scheduled for the 4th of July that year, but Parrott backed out of that one. “Like many other inventors and would-be innovators of the period, his name dropped from the news,” Berger writes, “though I have found references to an E.D. Parrott who applied for patents for a propeller and carburetor in the early 1900s. Despite the press story, no E.D. Parrott is credited with the first flight of an airplane or an airship. But Parrott’s claimed work is evidence that our state’s aviation roots go back a long time before Bill Boeing.”