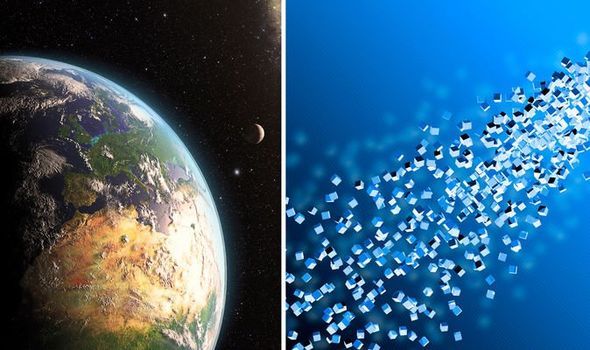 Listen to “e154 Aliens Could ‘Invade’ Our Solar System Using Tiny Robots and We Might Not Even Notice” on Spreaker.

• Zaza Osmanov of the Free University of Tbilisi, Georgia has written a paper which discusses ‘extraterrestrial micro replicators’ called Von-Neumann probes that are capable of reproducing themselves. Osmanov theorizes that an alien civilization could ‘invade’ our solar system using tiny ‘micro-robots’ which astronomers would probably fail to spot unless they knew exactly what to look for.

• It’s entirely possible, says Osmanov, that extraterrestrial beings could unleash a massive squadron of undetected microscopic probes across the entire galaxy, through clouds of interstellar gas which exist between star systems. Osmanov imagines that if the tiny mechanical probes landed on a rocky planet, it would have the resources needed to continuously reproduce the energy and resource-efficient micro-robots.

• Osmanov believes that ‘detection (of swarms of these micro-robots) is quite realistic’ as the machines’ luminosity ‘might reach enormous values’ to be visible to Earth astronomers. But if we are unable to spot them, this may fall under the ‘Fermi Paradox’ as we wonder why we have not been able to detect other galactic civilizations.

• Nick Longrich, a senior lecturer in palaeontology and evolutionary biology at the University of Bath, England, has said that the evolution of complex intelligent life on Earth (from a primordial soup) is so spectacularly unlikely it may have happened just once in the entire universe. Said Longrich, “Our (human) evolution may have been like winning the lottery … only far less likely. …The universe is astonishingly vast.” But even if habitable worlds are rare, there are still enough of them out there to suggest that there is also life out there.

• According to evolutionary theory, says Longrich, ‘Humans couldn’t evolve until fish evolved bones that let them crawl onto land. Bones couldn’t evolve until complex animals appeared. Complex animals needed complex cells, and complex cells needed oxygen, made by photosynthesis. None of this happens without the evolution of life, a singular event among singular events. … All organisms come from a single ancestor; as far as we can tell, life only happened once.” The odds of evolving intelligence become one in 10 million. “[O]ur evolution wasn’t like winning the lottery. It was like winning the lottery again, and again, and again.”

• “[I]ntelligence will evolve on just 1 in 100 trillion habitable worlds.” Reasons Longrich. “If habitable worlds are rare, then we might be the only intelligent life in the galaxy, or even the visible universe.” “And yet, we’re here. That must count for something, right? If evolution gets lucky one in 100 trillion times, what are the odds we happen to be on a planet where it happened?”

[Editor’s Note]  Mainstream scientists and astronomers have not “found” any other galactic civilizations because they are actively trying NOT to find any other civilizations, as they exist throughout this universe. So they get these ‘scientists’ from Deep State-controlled universities to talk about Fermi’s paradox and the long odds of life happening on the earth, and longer odds that it has occurred on other planets, to make us believe that we are the only intelligent life in the galaxy. But wouldn’t the odds dramatically increase if other more ancient intelligent beings were assisting in our human development, or even creating it over hundreds of millions of years? And what if these extraterrestrial beings were still here, controlling and manipulating the human species on earth? This is the reality that the Deep State and its elite masters want to keep secret.

Here on Earth, you know a country has been conquered when loads of tanks, attacks helicopters and burly great soldiers roll into town.

But aliens could ‘invade’ our solar system using tiny ‘micro-robots’ which astronomers would probably fail to spot unless they knew exactly what to look for.

A new study has revealed that it’s entirely possible an extraterrestrial civilisation has unleashed a massive squadron of microscopic probes which have spread out across the galaxy undetected.

Zaza Osmanov of the Free University of Tbilisi in Georgia has written a paper which discusses ‘extraterrestrial micro replicators’ called Von-Neumann probes that are capable of reproducing themselves.

Currently, the search for alien intelligence is focused on discovering huge ‘megastructures’ such as Dyson Spheres – hypothetical giant power stations built around stars to harvest their energy.

Osmanov suggested that advanced civilisations might actually build tiny machines to explore the galaxy and calculated how they would spread through a cloud of interstellar gas – the name for great billows of gas which exist between star systems.

‘The total number of probes might increase extremely rapidly ”invading” the whole region of an interstellar cloud,’ he wrote.

When we think of aliens invading a star system, it’s often assumed they would land on a planet and begin munching up its resources while enslaving or slaughtering its unfortunate inhabitants.

This approach might actually be counterproductive because it requires more energy and effort than unleashing swarms of robots.

‘Extraterrestrials would prefer to use micro-robots than large-scale macro probe,’ Osmanov continued.

‘Still there is a possibility to make the process of reproduction efficient but for that, the probes need to land on rocky planets.

‘This compared to the continuous process of replication of microdevices in interstellar clouds seems to be less efficient because landing on a planet and fleeing from it require special manoeuvring.’

Thankfully, if a horde of robots colonised a cloud in the Milky Way we would probably notice them.

Osmanov said ‘detection is quite realistic’ because the machines’ luminosity ‘might reach enormous values’, meaning they would give off enough light to be visible.

He wrote: ‘If one detects a strange object with extremely high values of luminosity increment, that might be a good sign to place the object in the list of extraterrestrial Von-Neumann probe candidates.’

The apparent contradiction between the likelihood of aliens existing in our gigantic universe and our inability to find them is called the Fermi Paradox.