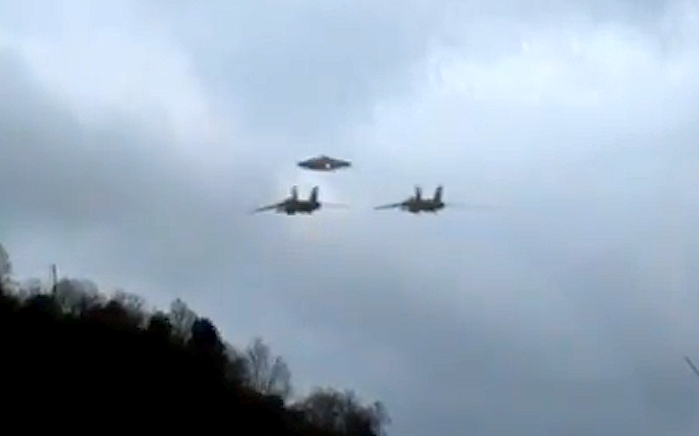 • Luis Elizondo, the former DoD intelligence officer who headed up the Pentagon’s Advanced Aerospace Threat Identification Program (AATIP) until 2012, is now an investigator with Tom DeLonge’s ‘To The Stars Academy’ and is featured on HISTORY’s new television program (ie: the History Channel), “Unidentified: Inside America’s UFO Investigation”.

• It was Elizondo and the ‘To The Stars Academy’ that were integral in bringing to the public the ‘Tic Tac’ UFO Navy cockpit video from 2004, with USS Nimitz-based pilots’ comments that included, “Holy sh*t, what is that?”, and “It’s white. It has no wings. It has no rotors,” and “It didn’t fly like an aircraft. It was so unpredictable.”

2) Sudden and instantaneous acceleration – UAPs will accelerate or change direction so quickly that no human pilot could survive the g-forces.

3) Hypersonic velocities without signatures – Aircraft traveling faster than the speed of sound will typically leave a “signature” like vapor trails and sonic booms. UAPs don’t.

4) Low observability or cloaking – Witnesses to a UAP will usually only see a glow or haze around them.

5) Trans-medium travel – UAPs have been seen moving in and between different environments, such as space, the earth’s atmosphere and even water. USS Princeton radar operator Gary Vorhees later confirmed from a Navy sonar operator in the area that day that a craft was moving faster than 70 knots underwater, roughly two times the speed of nuclear subs.

• UAPs’ origins are still unknown. Are they a super-top-secret U.S. defense project? Do they hail from Russia? China? Or from even further afield? The only thing we do know is that their capabilities exceed any technologies currently in the U.S. arsenal.

You know a UFO has earned its “unidentified” status when cockpit transcripts from elite Navy fighter jets include this frantic pilot exclamation: “Holy s___, what is that?”

When Luis Elizondo ran a small team at the U.S. Department of Defense investigating military-based reports of unidentified aerial phenomena (UAP), he heard numerous such accounts—by some of the most highly trained aeronautic experts in the military. They describe objects that appeared to be intelligently controlled, possessing aerodynamic capabilities that far surpass any currently known aircraft technology.

Now pursuing his investigations as part of To the Stars Academy of Arts & Sciences, Elizondo is an integral part of the investigative team featured on HISTORY’s “Unidentified: Inside America’s UFO Investigation,” where they have continued to gather eyewitness accounts:

“It didn’t fly like an aircraft. It was so unpredictable—high g, rapid velocity, rapid acceleration.”

“It was going 70-plus knots underwater.”

Those reports—from Navy fighter pilots, radar operators and other witnesses from the USS Nimitz aircraft carrier strike group incident from November 2004—were among a handful of shocking encounters the Unidentified team explored. When Elizondo ran the Defense Department initiative, called the Advanced Aerospace Threat Identification Program, or AATIP, he compiled a list of extraordinary, logic-defying capabilities most commonly associated with unidentified aerial phenomena sightings. He calls those traits the “five observables”: