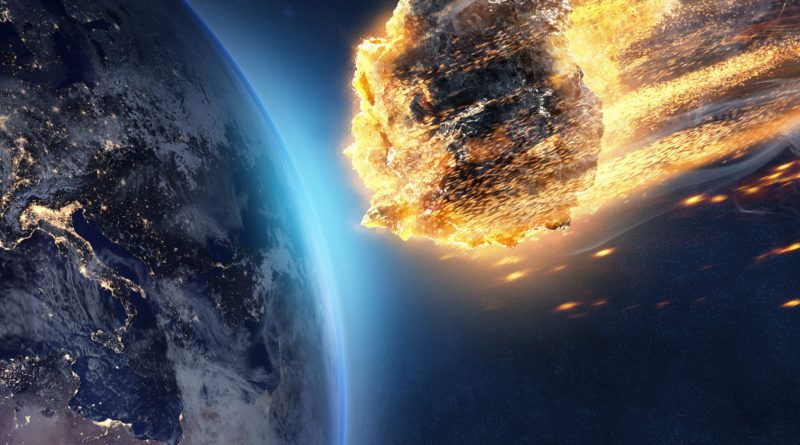 • In 2017, NASA and FEMA initiated a supposed fictitious response scenario for an asteroid hitting southern California on September 20, 2020. But is it just a drill? Or is it actual preparation for a real event while avoiding public panic?

• We have seen past situations when such a “drill” actually went “live”. In July 2017, a bombing drill became the actual London bombing. On September 11, 2001, a ‘military exercise’ became the 9-11 attacks on the World Trade Center buildings in NYC. Last March, in a White House press conference, Secretary of State Mike Pompeo blurted out that the coronavirus pandemic was a “live exercise” playing out. (see video here) In the background, a disgusted President Trump is heard to mutter, “You should have let us know.”

• The ‘exercise’ goes like this: A fictitious asteroid is discovered in the fall of 2016 heading in the direction of the Earth. The asteroid is estimated to be between 300 and 800 feet in size. NASA Jet Propulsion Laboratory gives it a 2 percent chance of impacting the Earth on September 20, 2020. NASA tracks the asteroid over the following three months using ground-based telescope observations, and the probability of impact climbs to 65 percent. The observations are put on hold for another four months due to the asteroid’s position relative to the Sun. When the observations resume in May 2017, the impact probability jumps to 100 percent. By November 2017, the asteroid’s impact is calculated to hit somewhere in Southern California or just off the coast in the Pacific Ocean.

• NASA, FEMA, NASA’s Jet Propulsion Laboratory, the Department of Energy’s National Laboratories, the U.S. Air Force, and the California Governor’s Office of Emergency Services have all been participating in this four year ‘exercise’. “By working through our emergency response plans now, we will be better prepared if and when we need to respond to such an event,” said FEMA Administrator Craig Fugate.

• Previous tabletop simulations included a scenario where the asteroid is somehow deflected away from the Earth. But in this scenario, NASA JPL said that “the time to impact was too short for a deflection mission to be feasible”. Instead, they role play the forced mass evacuation of Los Angeles.

• “Scientists from JPL, Lawrence Livermore National Laboratory, Sandia National Laboratories, and The Aerospace Corporation predicted impact footprint models, population displacement estimates, information on infrastructure that would be affected…” according to the NASA simulation report, “… as well as other data that could realistically be known at various points throughout the exercise scenario.”

• “[U]nlike any other time in our history, we now have the ability to respond to an impact threat through continued observations, predictions, response planning and mitigation,” said Thomas Zurbuchen, Associate Administrator for NASA’s Science Mission Directorate. “It’s not a matter of if – but when – we will deal with such a situation.”

The National Aeronautics Space Administration and FEMA in 2017 devised and initiated a supposed fictitious scenario in which the two agencies would drill down on an asteroid that’s set to impact the Earth in or just off the coast of California on September 20, 2020, but is this so-called “exercise” really just a drill?

NASA claims “the simulation was designed to strengthen the collaboration between the two agencies, which have Administration direction to lead the U.S. response” but could the drill actually go live like so many other drills have in the past? (i.e. the July 7, 2007, London bombing, the September 11, 2001 attacks on the World Trade Center and Pentagon, and others)

“It’s not a matter of if–but when–we will deal with such a situation,” Associate Administrator for NASA’s Science Mission Directorate Thomas Zurbuchen said. “But unlike any other time in our history, we now have the ability to respond to an impact threat through continued observations, predictions, response planning and mitigation.”

The exercise was designed to create “a forum for the planetary science community to show how it would collect, analyze and share data about a hypothetical asteroid predicted to impact Earth. Emergency managers discussed how that data would be used to consider some of the unique challenges an asteroid impact would present-for preparedness, response and public warning,” according to NASA.

Representatives from NASA, FEMA, NASA’s Jet Propulsion Laboratory, the Department of Energy’s National Laboratories, the U.S. Air Force, and the California Governor’s Office of Emergency Services attended the initial meeting and will be participating throughout the 4 year long exercises which is set to come to a head on Sept 20, 2020.

“It is critical to exercise these kinds of low-probability but high-consequence disaster scenarios,” FEMA Administrator Craig Fugate said. “By working through our emergency response plans now, we will be better prepared if and when we need to respond to such an event.”

The exercise simulates a possible impact four years from now in which, according to NASA, “a fictitious asteroid imagined to have been discovered this fall with a 2 percent probability of impact with Earth on Sept. 20, 2020. The simulated asteroid was initially estimated to be between 300 and 800 feet (100 and 250 meters) in size, with a possibility of making impact anywhere along a long swath of Earth, including a narrow band of area that crossed the entire United States.”