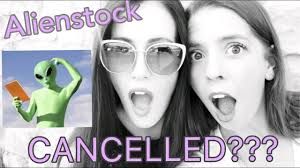 The Storm Area 51 Festival Has Been Canceled to Avoid Creating “Fyrefest 2.0”

• Alienstock is no more. The event’s website states: “Due to the lack of infrastructure, poor planning, risk management, and blatant disregard for the safety of the expected 10,000+ AlienStock attendees, we decided to pull the plug on the festival.”

• The cancellation is ostensibly due to a permit holder failing to provide the appropriate planning documentation. The organizers didn’t want the event to turn into a “humanitarian disaster” like the Fyre Festival (the May 2017 Bahamas festival that left visitors stranded and led to a fraud conviction for the organizer).

• The organizers are urging people to an alternate gathering. “[AlienStock] can only promise absolute safety and peace, and we need to move the Festival to guarantee that.” Accordingly, the whole thing’s been moved to a September 19th party at the Downtown Las Vegas Events Center.

• The world was set to be changed forevermore from September 19 to 22 when Matty Roberts created the “Storm Area 51, They Can’t Stop Us All” Facebook event, which morphed into a music festival in Rachel, Nevada called AlienStock. Critics of the event say that the whole thing seemed like a complete ‘shitshow’ from the beginning, with hazy planning for a gathering of thousands of attendees in the tiny desert town.

The forces responsible for hiding aliens from us have triumphed once again. We thought they were finally on the ropes after internet mavericks announced a plan to storm Area 51, gathering huge masses of truth-seekers to Naruto-run past government bullets directly into an exciting new era of human/extraterrestrial coexistence. We thought it would work, even as alien whistleblower Bob Lazar (clearly compromised by the Men In Black) called the public invasion “not the way to go about trying to get information.” But now, despite overcoming such adversity and showing such ingenuity, the bastards have defeated the public for a final time.

Their tool? A permit holder whose interference in the planning process has caused the event organizers to withdraw in fear of causing, in their own words, “Fyre Fest 2.0.”

The world was set to be changed forevermore from September 19 to 22 when Matty Roberts, creator of the “Storm Area 51, They Can’t Stop Us All” Facebook event, decided to organize his ramshackle army into a festival held at Rachel, Nevada called, obviously, AlienStock. As Vice’s MJ Banias reported a few weeks ago, the whole thing seemed like a complete shitshow with hazy planning meant to accommodate thousands of attendees staying outside of a tiny desert town.

Now, with the highest echelons of the American government seizing on this instability, AlienStock has been canceled outright. The event’s website states: “Due to the lack of infrastructure, poor planning, risk management, and blatant disregard for the safety of the expected 10,000+ AlienStock attendees, we decided to pull the plug on the festival.”