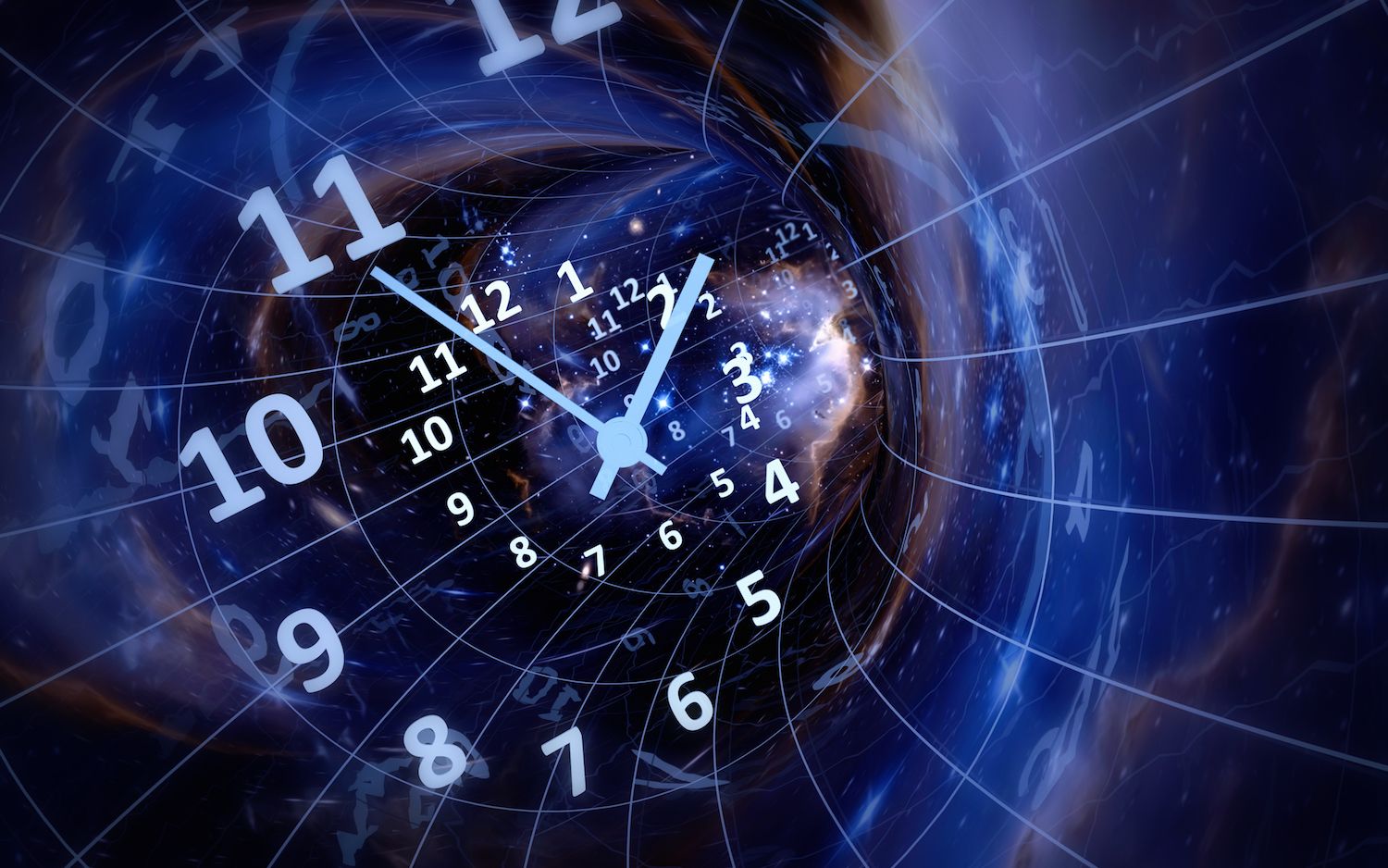 The Secret US Military Device for Seeing in the Past

• Dr Steven Greer is one of the world’s leading authorities on extraterrestrials and an explorer of “consciousness technologies”, i.e.: a research and development frontier that combines meta physics with quantum mechanics, or, how “electronic systems are interfacing with the quanta of thought”. Founder of the Center for the Study of Extraterrestrial Intelligence, Greer has briefed presidents and heads of state on the ET phenomenon.

• Greer told Express.co.uk that he had a ‘military adviser’ who was once attached to US Naval Intelligence at the old White Oaks naval facility in Silver Spring, Maryland outside of Washington DC. The adviser told Greer about a time-traveling device that the US Navy had developed in the 1970s at the secret weapons laboratory at White Oaks, which allowed the scientists and intelligence agents view events of the past. This device could tune in to the “white noise of space-time” and extract the information about what happened a century ago, or a million years ago, at any given location. Greer speculates that this ‘white noise’ that the device taps into is actually the ‘Akashic Record’. Ancient mystics describe the Akashic Record as the storage place for all human events, thoughts, words, emotions, and intent that have ever occurred in the past, present, or future. Greer believes that this record is stored in interdimentional space and the Navy’s device could interface with this interdimentional realm.

• Greer notes that the CIA’s successful development of remote viewing in the 1970s, where one can spy on anyone remotely through their consciousness, shows that the mind is not limited to our brain or our bodies. “Neither time nor space limits awareness.” He believes that advanced extraterrestrial civilizations are able to utilize quantum mechanics through consciousness to travel the universe and instantly appear or disappear from a physical realm. This would explain certain instances of strange UFO sightings, alien contacts, and paranormal apparitions.

• Greer says that he had interviewed many “whistle blowers” about advanced technologies that seemed to work via quantum entanglement. Quantum entanglement describes how two particles that are separated by vast distances in space, or time, can be linked and how their movements correlate. Quantum mechanics scientist, John Archibald Wheeler of Princeton University, explains that according to the laws of quantum mechanics, atomic particles exist in state of constant possibility. They can be anywhere, everywhere or nowhere at all in both the dimensions of time and space. What anchors them into position is the active thought of the observer, such as a scientist in a laboratory.

• Finally, Greer discussed the development of artificial intelligence such as Elon Musk’s Neuralink project which will create a low-latency broadband link in the human brain to facilitate thought-control of electronic devices. But with the growth of AI, Greer cautioned, there is the risk of the machines seizing control over human thoughts.

• [Editor’s Note]  There have been many accounts that the government has experimented with time-viewing/time-travel technology for decades.

In a 1964 television interview, ET contactee George Van Tassell said that human-looking extraterrestrials showed him technology that could be used to view a visual scene from any historical time period, which the US Navy had in its possession. The description of this device that could view past events was very similar to what the legendary UFO whistleblower Bob Lazar revealed in 1989 as “Project Looking Glass”, a classified project run by the US Navy out of the S-4 facility at Area 51 since the early 1960s. Lazar claimed that the ‘Looking Glass’ technology was based on the distortion of space-time by gravity.

The earliest reference of ‘Project Looking Glass’ type technology came from Italy in the 1950s. A Dominican priest by the name of Father Pellegrino Ernetti invented a ‘chronovisor’ device capable of peering into the past by electronically modifying the frequencies of chants by Benedictine monks. Ernetti claimed to have witnessed the crucifixion of Christ and other historical events by this device. The chronoviser technology was turned over to the Vatican who passed it along to the CIA who continued to develop the technology through deep state black budgets in the 1960s and 70s.

CIA whistleblower Andrew Basiago confirmed the CIA’s experimentation with Ernetti’s ‘chronovisor’. Basiago said that from 1967-1971, as a six-year old boy, he was involved in ‘Project Pegasus’ when the CIA and DARPA refined the chronoviser technology. In 1970, Basiago and other child participants regularly visited various classified chronoviser facilities in northern New Jersey where they were able to access past and future events. Basiago corroborated his claim in a 2015 interview with C2C radio host Art Bell, when he told Bell that he remembered seeing Bell working on a classified project in an ITT facility in Nutley, New Jersey in 1970. An astounded Bell admitted that he was indeed employed by ITT in a classified NATO communication project at the time, which Bell had never publicly revealed. Basiago asserted that chronovisor technology was just one among many ways in which the CIA could view the past and future in order to gain intelligence data, and to also attempt to manipulate history through time travel missions.

In his 1992 book, Montauk Project: Experiments in Time, Preston Nichols described bizarre military experiments conducted at Montauk Air Station, Long Island, NY from 1971 to 1983. A navigation control chair from an extraterrestrial craft was set up at the facility. When a person sat in the ‘Montauk chair’, their psychic abilities became so enhanced that they were able to distort time to look into the past or future. Nichols described what happened when a test subject, Duncan Cameron, sat in the Montauk chair. He was directed by his military intelligence handlers to concentrate on an opening in time. A ‘hole’ or ‘time portal’ would then appear in front of the chair, which a person could walk through. It looked like a circular corridor with a light at the other end. The time door would remain open so long as Duncan (or whomever) would concentrate on a particular time in the past or future.

In a 2019 article by Dr Michael Salla entitled: “Project Looking Glass – the Q Anon & Deep State Temporal War”, Salla noted that both the deep state and the military intelligence ‘Alliance’ factions have access to this sort of time-viewing and time-travel technology, to peer into the future and anticipate each other’s moves. The deep state has used the technology to anticipate and thwart Alliance actions against them, as foretold by Q Anon. But since this is an undependable technology due to fractured timelines, both sides have focused more on time-travel technology. This has created a ‘temporal war’ with both factions attempting to manage past events in order to influence future timelines, to suit their respective agendas.

mechanism that was developed at the US secret weapons laboratory at White Oaks in Maryland. During his research he described how a military advisor for the US Navy informed him of a device that could extract information in a specific location from “a century ago, or even a thousand years ago”.

Speaking to Express.co.uk Doctor Greer said: “One of my military advisors was with naval intelligence.

“In the old days there was a naval facility at White Oaks outside Washington DC.

“The facility had an electronic device that could extract from any point in space something that had happened in the past in that location.
“They called it the white noise of space-time.”

The UFO researcher explained this time travelling project was developed in the 1970s.

Doctor Greer described it as an electronic system “that allows you to see what happened an hour ago in the space that you are sitting in at that time”.

He added: “You can also extract the information about what happened a century ago, or a thousand years ago, or a million years ago.”

Doctor Greer, who is one of the world’s leading authorities on extraterrestrials said that he had interviewed many “whistle blowers” about advanced technologies that seemed to work via quantum entanglement.

Quantum entanglement describes how two particles that are separated by vast distances in space, or time, can be linked and how their movements mysteriously correlate.

He said: “I briefed former ministers of defence on these projects.

“There are highly compartmentalised projects that have not been revealed to even members of the UK Government.

The UFO researcher suggested that the machines tapped into “what mystics used to call the Akashic record”.