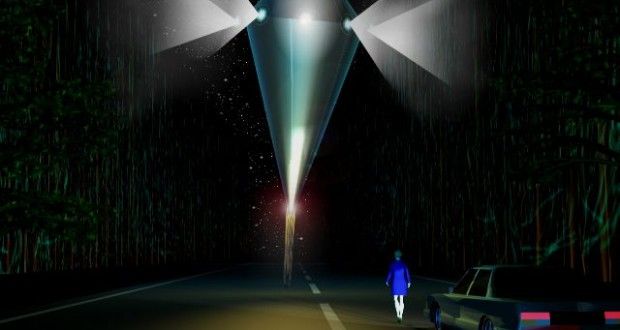 • On the evening of December 29, 1980, Betty Cash (52) and her friend Vickie Landrum (57), along with Vickie’s grandson, Colby Landrum (6), went out for a drive on two lane road on the outskirts of the little town of Huffman, near Houston, Texas. As they rounded a bend, they saw a huge, blindingly bright, unidentified flying object hovering over the road, intermittently emitting flames downward. Afraid, they stopped the car. Betty stepped out of the car in attempt to get a better look at the object. Soon, the object lifted up and slowly flew away. Then they saw what they assumed were military helicopters trying to surround the object to either to pursue it, or perhaps escort it. Afterward, they all went home. This has become known as the ‘Cash-Landrum Incident’.

• After she dropped Vickie and Colby off, Betty went home and went to bed with a terrible headache. This was the beginning of a lengthy illness that resulted in her hospitalization. Vickie and Colby also reported flu-like symptoms, milder than Betty’s problems. Betty’s hair loss and flu-like symptoms caused the physicians to check her for radiation exposure, but the results were negative. The cause of her health problems was not determined.

• Due to Betty’s lingering health problems, she suspected that her encounter with the strange object on the night of December 29th may have been the cause. Betty reported the incident to the National UFO Reporting Center. This led to news coverage and a civilian investigation.

• In 1981, Betty wrote to Texas senators who advised her to file a complaint at Bergstrom Air Force Base near Austin, Texas. Military investigators interviewed the witnesses, but concluded that it was ‘improbable’ that the event occurred. US Congressional Representative Ron Wyden asked for an investigation into whether US aircraft had been involved in the incident. The Department of the Army investigated, yet found no indication to support the ladies’ claims that any military helicopters had been involved.

• The ladies hired attorney Peter Gersten to file a $20M lawsuit against the government. Gersten stated that the chances of winning were “slim and none,” but he wanted to use the suit as a means of forcing the government to disclose UFO documents. The judge dismissed the case on August 21, 1986 for lack of evidence. The complainants had failed to prove that US aircraft were involved in the incident or that it was responsible for causing the alleged injuries.

• Next, the media got hold of it. ABC’s Good Morning America gave it national exposure as a UFO story. The press presented a simplified narrative of the incident, and before long, the witnesses were telling a homogenized version based on what they’d read about their own story. It also attracted other less-credible witnesses to seeing the UFO/helicopters that night. The Aerial Research Phenomena Organization (APRO) decided to investigate the incident, only to have one of its own employees sell the story to a tabloid. Others such as the deputy director of the Mutual UFO Network John F. Schuessler, William Moore and Richard Doty used the Cash-Landrum story to promote their own agendas.

• A leading expert on UFO mysteries, legends, and hoaxes, Curt Collins, took on the Cash-Landrum case. But the more he researched, the more he discovered that the real events had been obscured by misinformation and rumors to the point that the real story began to vanish. But after learning more about the requirements for equipment and personnel, the military helicopters aspect of the story was implausible.

• Then Vickie Landrum was quoted as trying to comfort her grandson, Colby, by telling him that the UFO was “Jesus”, and “He will not hurt us”. Religious zealots have clung to the UFO phenomenon since ‘extraterrestrials’ first came into the public limelight in 1947. Since then, god-like aliens have become a fundamental UFO belief in some circles. Collins warns that we should not waste time hoping that “parents” from space will come down and solve our problems.

• Collins concedes that we may never know exactly what happened on that Texas roadway the night of Dec. 29, 1980. More information has surfaced over the years from government documents to researchers’ archived files and correspondence, and there’s probably more to come. “It’s a fascinating UFO puzzle.”

One of the world’s leading experts on the Cash-Landrum case is Curt Collins, the author behind Blue Blurry Lines, a website focused on UFO mysteries, legends, and hoaxes. In 2015, Curt was on the investigative team that exposed the BeWitness “alien” photo fiasco, the Roswell Slides Research Group; his detailed accounting of this exposé was featured in my 2017 book UFOs: Reframing the Debate. More recently, Curt launched The Saucers That Time Forgot with Claude Falkstrom, focused on unearthing “tales that UFO history has overlooked or would rather forget.” Curt has spent many years retrospectively investigating the Cash-Landrum incident. Here, Curt separates the fact from the fiction as he talks to me about this fascinating yet hugely problematic case.

RG: Summarise the Cash-Landrum incident for us.

According to the story that surfaced, Betty Cash (52) and her friend Vickie Landrum (57) were out for a drive on the evening of December 29, 1980. Along with them was Vickie’s grandson, Colby Landrum, just shy of seven years old. The location was near Houston, Texas, on a two-lane country road in a sparsely populated area on the outskirts of the little town of Huffman. They rounded a bend and found a huge, blindingly bright, unidentified flying object hovering over the road. It intermittently emitted flames downward, and the witnesses were afraid and stopped. Betty stepped out of the car in attempt to get a better look at the object, but the other two quickly returned to the car. Shortly afterwards, the object lifted up and slowly flew away. The witnesses saw helicopters following it, and they had the impression they were military helicopters trying to surround the object, either to pursue it, or perhaps escort it. Once the aircraft had passed, they continued their drive home. Betty dropped Vickie and Colby off, and went home, where she went to bed with a terrible headache, which was the beginning of a lengthy illness that resulted in her hospitalization. Vickie and Colby also had flu-like symptoms and reported similar, but milder problems than Betty’s. None of them initially connected their illness with the UFO sighting, but, due to Betty’s lingering problems, came to suspect it may have been the cause.

RG: You’ve spent many years of your life researching the Cash-Landrum incident; what is it about this case in particular that you find so compelling? Why is it so significant?

CC: I was interested in the whole of UFO history, but drawn to focus the C-L story due to its reputation for being one of the best-documented and credible cases. The reported involvement of the military made me think that there must be further evidence to be uncovered, from declassified documents or perhaps from new witnesses such as retired helicopter pilots. However, as I dug in, I learned that the real events have been obscured by misinformation and rumors to the point that the real story has begun to vanish. A great stroke of luck was finding Christian Lambright who had independently interviewed Vickie Landrum twice in 1985, uncovering important differences in the witnesses account from the way ufologists were packaging the UFO story. This fueled my desire to dig beneath the mythology to find exactly what could be documented about the case.

RG: Did the US government ever provide an official explanation for the incident?

CC: No. There has never been any tangible proof that there actually was an incident.