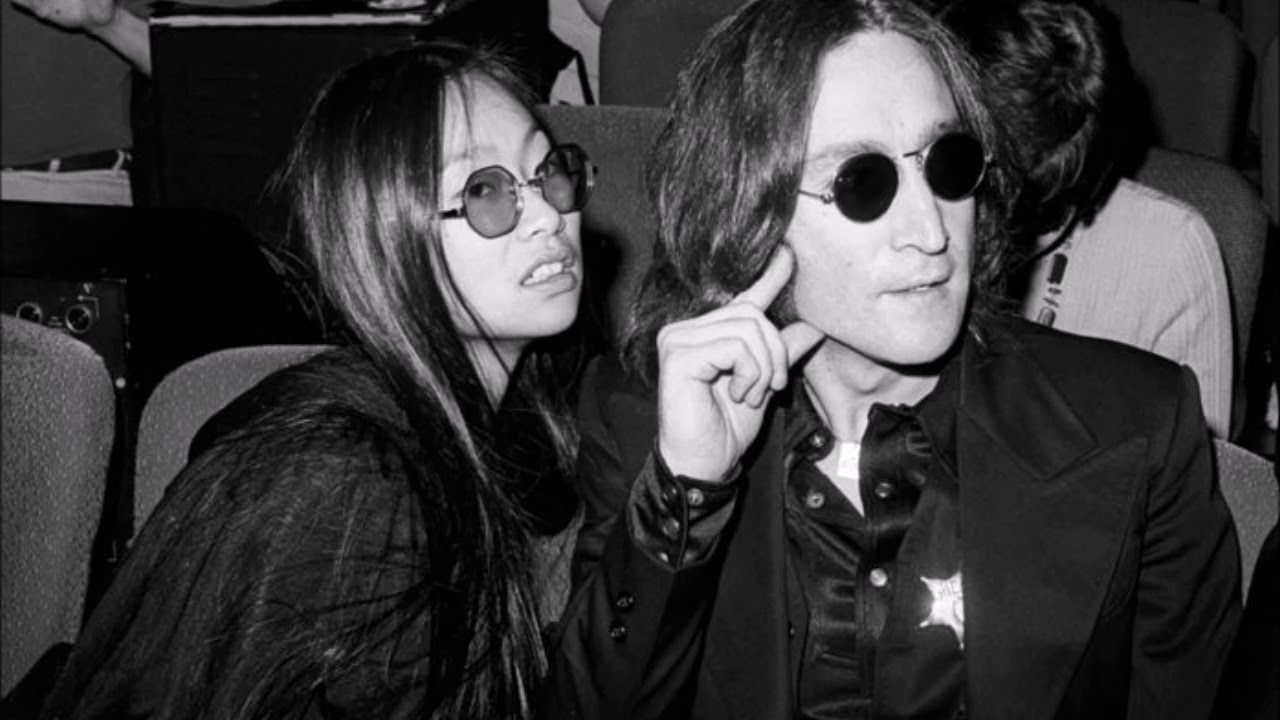 • In (August)1974, John Lennon was gazing out of the apartment window of the Manhattan apartment he shared with May Pang, “just daydreaming around in my usual poetic frame of mind”, when he saw a UFO hovering around 100 feet away over a nearby building. He and May went out to the terrace and saw a large, circular object coming toward them.  (John and May are pictured above)

• May Pang describes the UFO as “… shaped like a flattened cone, and on top was a large, brilliant red light, not pulsating as on any of the aircraft we’d see heading for a landing at Newark Airport. …When it came a little closer, we could make out a row or circle of white lines that ran around the entire rim of the craft. These were also flashing on and off. …There were so many of these lights that it was dazzling to the mind.”

• Lennon later referenced the UFO sighting in the lyrics of his song ‘Nobody Told Me’ (there’d be days like these): “There’s UFOs over New York / And I ain’t too surprised.”  (see below)

• Pang has opened up on the experience in interviews (listen to May Pang’s interview below discussing the UFO sighting). In an interview with The Beatles Bible, May declared, “I know what I saw. And the rational explanation is… it was a UFO.” May claimed that 400 fellow New Yorkers reported seeing the UFO in 1974. But also she saw another UFO in the early 80’s, along with other people.

• Whether Lennon had called out to the UFO in the hope it might take him away, Pang clarified the rumor: “He didn’t call out to it; he later said he wished it had taken us with it. …However, I doubt we’d have been that enthusiastic to go along had the opportunity actually presented itself.”

• Lennon tried to take pictures of the UFO with both a polaroid and regular camera but said the film came back blank, like it had “been through the radar at customs”. His photographer Bob Gruen, called the Daily News and the Times the next day, as well as the police, to see if anyone else had reported a sighting. “[O]ther people and/or groups said they too saw something,” Lennon said. “Anyway, I know what I saw…”

John Lennon remains one of Britain’s most acclaimed musicians to this day thanks to his contributions both with The Beatles and as a solo artist. Famously shunning the mainstream for the experimental after meeting and falling in love with avant-garde artist Yoko Ono, he went on to leave the band and also turned his attention to peace activism.

A few short years into his marriage to Ono, however, Lennon embarked on a romance with their assistant, May Pang.

Ono knew about the affair, during which her famous husband moved out of their New York home and to Los Angeles with Pang, later saying it “wasn’t hurtful” to her.

While he was with Pang, at a time they were in New York, The Beatles star claimed to have seen a UFO, even referencing the moment in the liner notes for Walls and Bridges and in his song Nobody Told Me, in which he sings: “There’s UFOs over New York / And I ain’t too surprised.”

In a rare interview with The Beatles Bible years later in 2011, Pang opened up on the experience, revealing what she thought to be the truth of the matter.

“I know what I saw. And the rational explanation is… it was a UFO,” she declared.

“There’s UFOs over New York, as the song goes. And I saw another one in the early ‘80s, and I know other did people did too.”

Asked if anyone else in the city spotted the object that day in 1974, Lennon’s ex replied: “Yes, that event had about 400 reported sightings, I believe.”

On the subject of whether or not Lennon had, in fact, called out to the UFO in the hope it might take him away, Pang clarified: “He didn’t call out to it; he later said he wished it had taken us with it.

3:35 minute “Nobody Told Me” song by John Lennon (‘johnlennon’ YouTube)