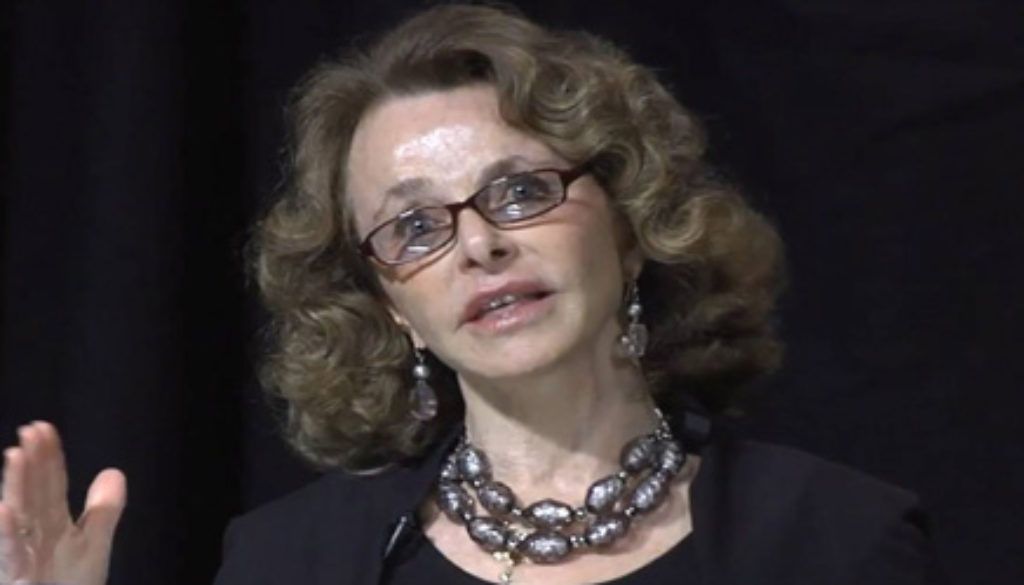 Listen to “e174 UFO Researcher Explains Why She Sold ‘Exotic Meta-Material’ to Tom DeLonge” on Spreaker.

• In October 2019, Tom DeLonge’s ‘To The Stars Academy’ entered into a partnership with the US Army to study an exotic ‘meta-material’. (See previous ExoArticle here) So where did this exotic material come from?

• In the summer of 1947, (just prior to the infamous Roswell crash of July 4, 1947) locals found a wedge-shaped craft that had crashed near the White Sands proving grounds in New Mexico where two dead aliens were discovered and one that was still alive. One local man yanked a piece of the metal off of the craft as a souvenir. The man gave the piece of metal to his grandson who became a sergeant in the US Army. In 1996, this anonymous sergeant turned the metal over to Art Bell, the late host of Coast to Coast AM, and investigative journalist and UFO researcher Linda Moulton Howe (pictured above).

• Moulton Howe took the piece of bismuth magnesium alloy to Carnegie Science’s Department of Technical Magnetism to have it assessed. The findings at the time were inconclusive. Then she took the metal sample to the chair of the Institute of Advanced Studies in Austin Texas, Dr. Hal Puthoff. Again, the tests were inconclusive. Puthoff did suggest that another test could be done with special instrumentation. It was hypothesized that if you blasted the metal with enough terahertz of magnetic field energy, it would cause it to float. Tom Delonge repeated this in a podcast interview with Joe Rogan.

• Moulton Howe allowed ‘To The Stars Academys’ scientists, including Puthoff, further attempts to test the metal without success. Then in July 2018, ‘To The Stars’ COO and former director of Lockheed Martin’s Skunkworks, Steve Justice gave Moulton Howe a phone call. Justice said that the US Army might be interested in studying the metals. The US Army Ground Vehicle Systems Center had a Materials Analysis and Electro-Magnetic Spectrum laboratory. The Army was interested in blasting the meta-material with magnetic fields to elicit a “demonstrable physical phenomena.” ‘To The Stars Academy’ would partner with the US Army, and they hoped that Moulton Howe would come to San Diego and deliver the piece to them. The Army wanted to apply any resulting physical phenomenon to its ground vehicle applications.

• Moulton Howe estimated that she’d spent about $900 to $2,000 a year from 1996 to 2019 “in all the various things that I’ve done.” Finally, she decided that her only option was to sell the pieces of metal to ‘To The Stars’ and the US Army. Said Moulton Howe, “I don’t want to stop what may be the only way they’re going to be able to test this.” She offered the metal for $35,000, which the buyers considered a low figure. In its September 2019 SEC filings, ‘To The Stars’ reported that it had paid $35,000 for ‘exotic’ meta-materials in July.

• Downplaying the exotic nature of this meta-material, Dr. Chris Cogswell, a PhD in Chemical Engineering who hosts the Mad Scientist Podcast said that he believes that this type of ‘exotic’ metal alloy is “made by mistake in metallurgy facilities all the time” by using magnesium to remove bismuth according to the Betterton-Kroll process.

The UFO researcher who sold bits of ‘exotic’ metal to former Blink-182 singer turned UFO mogul Tom DeLonge for $35,000 explained to Motherboard why she parted with the artifact and what will happen to it now.

In 2017, the New York Times ran an article about a secret Pentagon UFO program known as the “Advanced Aerospace Threat Identification Program.” The article noted that aerospace billionaire Robert Bigelow, whose interest in UFOs is no secret, modified buildings to house “metal alloys and other materials…that [allegedly] had been recovered from unidentified aerial phenomena.” Earlier this year, DeLonge’s UFO outfit To The Stars Academy paid $35,000 for ‘exotic’ metamaterials according to its September SEC filings.

TTSA bought the metals from Linda Moulton Howe, a UFO researcher, in order to “conduct rigorous scientific evaluations to determine its function and possible applications,” the company said in a press release in July. In October, the company entered into a partnership with the US Army to research the metal and also study some pretty wild science, such as active camouflage, inertial mass reduction, and quantum communication.

In an interview, Moulton Howe said that she and Art Bell, the late host of Coast to Coast AM, acquired the metal in 1996, along with a handful of letters from an alleged sergeant in the United States Army who still remains anonymous. Moulton Howe has made some pretty wild claims about the metal: She says that the sergeant’s grandfather yanked the metal off a wedge-shaped craft that crashed in 1947 near the White Sands proving grounds in New Mexico. She has also publicly claimed that the crash recovery team discovered two dead aliens and one that was still alive.

Moulton Howe and DeLonge both believe that, by blasting the metals with a magnetic field, it will float: “They had a piece and they explored whether magnetic fields would cause it to turn into a lifting body. Different frequencies,” Moulton Howe said. These are the same materials mentioned by DeLonge on his Joe Rogan interview where he stated, “if you hit it with enough terahertz, it’ll float.”

In any case, the metal is of interest to not only DeLonge and Moulton Howe, but also to the US Army, which told Motherboard that it would be studying metals like it by blasting it with magnetic fields and looking for “demonstrable physical phenomena.”

“The USG and US Army Ground Vehicle Systems Center has broad ranging Materials Analysis and Electro-Magnetic Spectrum laboratory capabilities at our disposal,” Jerry Aliotta, a U.S. Army spokesperson, told Motherboard. “There are materials and technologies of interest that TTSA possesses that we will evaluate and exploit.”