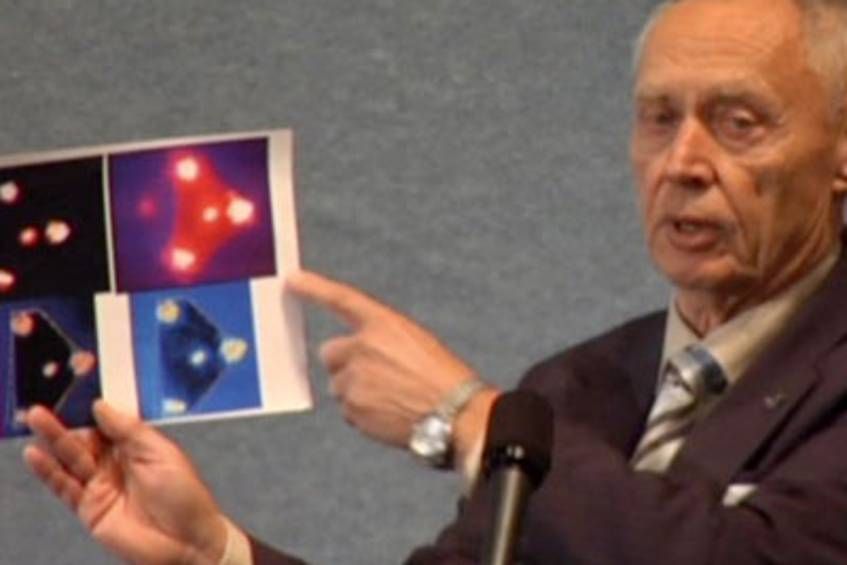 30 Years Later, We Still Don’t Know What Happened During the Belgian UFO Wave

• On a clear November night in 1989, near the town of Eupen, Belgium near the German border, policemen Heinrich Nicoll and Hubert Von Montigny called their dispatcher to report seeing “a strange (silent) object in the sky.” By the end of the evening, three other pairs of police officers and at least 30 different groups of people would also report seeing the UFOs. This “UFO wave” would continue for months, culminating on March 30, 1990 with two Belgian Air Force F-16s chasing the triangular UFOs on their radars, which they couldn’t even see.

• A Belgian police officer described the hovering craft “like lights on a huge football field” so bright you could read by them. Only gradually did you notice the object they emitted from — a hulking triangular shape, with three enormous spotlights pointed toward the ground, and a red, flashing light at its center. “The whole thing,” recalled the policeman, “was floating in the air.”

• In December 1989, Belgian Army Colonel André Amond and his wife reported seeing the silently floating lights while driving in their car. But the Belgian military had no answers. The Chief of Operations of the Belgian Air Staff, General Wilfried De Brouwer (pictured above), told investigative reporter Leslie Kean that he suspected the UFOs were experimental American military craft. De Brouwer filed inquiries with the US Embassy in Brussels. But the Americans responded by saying that “no USAF stealth aircrafts were operating in the… area during the periods in question.”

• So the Belgian Air Force, aviation authorities, and police devised a plan. They had F-16 jets ready to take off at the first sign of another UFO. On March 30, 1990, police and radar stations spotted an unknown object in the sky. The Belgian pilots tried to intercept the crafts and recorded targets on their radar with unusual behavior, such as jumping huge distances in seconds and accelerating beyond human capacity. But the pilots could never actually see the object. De Brouwer concluded that there was insufficient evidence to prove that the crafts were really there. Still, in April 1990, thousands more sightings were reported before the encounters dropped off.

• Of course, many explanations were offered to debunk the sightings. Some scientists considered the event to be an example of mass hysteria. UFO skeptic Philip Klass blamed the sightings on “mass excitement” caused by media reports of UFOs, where people would see ordinary things in the sky and “hopeful viewers” would then believe they were UFOs. Brian Dunning of the UFO skeptic podcast Skeptoid imaginatively claimed that the craft were helicopters. The Reuters news organization claimed it was a Soviet satellite ‘breaking up’.

• Some pranksters admitted in 2011 to concocting the “Petit-Rechain picture” often used as a photo of the Belgian triangle UFO. Said one hoaxer, “We made the model with polystyrene, we painted it, and then we started sticking things to it, then we suspended it in the air … then we took the photo.”

• Notwithstanding, General De Brouwer said, “I can conclude with confidence that the observations during what is now known as the Belgian wave were not caused by mass hysteria. The witnesses interviewed by investigators were sincere and honest. They did not previously know each other. Many were surprised by what they saw and today … they are still prepared to confirm their unusual experience.”

• While the Belgian UFO wave likely wasn’t an alien visitation, it remains unanswered even all these decades and technological advances later. “That is a pity,” says Colonel Amond who saw the lights with his wife, “I want to know before dying… that is all I can ask.”

• [Editor’s Note]   In chapter 15 of Dr Michael Salla’s 2019 book: US Air Force Secret Space Program – Shifting Extraterrestrial Alliances & Space Force, he discusses the origin of the US Air Force’s top secret Aurora Program which developed the TR-3B triangle craft, able to perform both in the earth’s atmosphere and in near space. Salla cites Edgar Fouche who confirms that the TR-3B, code named ‘Astra’, was a tactical reconnaissance craft developed in the 1970s and built by private aerospace companies for the Air Force during the 1980s. Fouche served with the US Air Force from 1967 to 1987 and then spent another eight years with defense contractors working on a number of classified aviation programs at Groom Lake Area 51.

The TR-3B employs a “Magnetic Field Disrupter” which rotates highly pressurized mercury-based plasma around a circular accelerator ring, reducing the craft’s weight by a factor of 89%. Three rocket engines using conventional fuel sources like hydrogen, oxygen and/or methane provide the thrust. The TR-3B is a high altitude, stealth, reconnaissance platform with an indefinite loiter time. Fouche claimed that the TR-3B was able to silently hover for at least 10 minutes and gave off “a corona of silver blue light” that glowed around it while hovering.
Corey Goode asserts that the TR-3B was a “hand me down” to the USAF’s military space program and to cabal “elites” from an even more highly classified space program controlled by NASA along with the Antarctic German Space Program.

At first, the witnesses claimed, all you noticed were the lights.

They were so bright you could read by them, so brilliant that a policeman described them as “like lights on a huge football field.” Only gradually did

you notice the object they emitted from — a hulking triangular shape, with three enormous spotlights pointed toward the ground, and a red, flashing light at its center. “The whole thing,” recalled the policeman, as if barely able to believe it himself, “was floating in the air.”

It was a clear November night in 1989, near the town of Eupen, Belgium, which sits some seven miles from the German border. Heinrich Nicoll, the policeman, and his partner, Hubert Von Montigny, called their dispatcher to report the object they’d stumbled on while on a routine patrol. “Suddenly, they told me they were seeing a strange object in the sky,” Albert Creutz, who was on the receiving end, told Unsolved Mysteries in a 1992 episode. “It made no noise. We joked about it and said it might be Santa Claus trying to land.”

But by the time the evening was over, at least 30 different groups and three separate pairs of police officers would allege to have seen the unidentified flying object. And they wouldn’t be the last. Belgium’s months-long “UFO wave” culminated 30 years ago today — on March 30, 1990 — in a physics-defying chase through the skies over Europe as two Belgian Air Force F-16s pursued mysterious objects on their radars that they couldn’t even see.

But, okay okay, did aliens really visit Belgium? It certainly seems deeply, deeply unlikely. Yet three decades later, it’s still hard to entirely dismiss the 2,000-odd sightings that took place in the country between November 1989 and April 1990. As Patrick Ferryn, the president of the Belgian committee for the study of space phenomena, SOBEPS, told The Telegraph, “You must know that most of these sightings will have the most banal explanation but there is a residue, which we simply can’t explain. And of those, there may be two or three where we may have questions over where they came from.”

The Most Credible UFO Sightings and Encounters in Modern History, According to Research

The modern era of UFO sightings began in 1947 when Kenneth Arnold, a businessman and pilot from Idaho, spotted what he believed was a formation of flying saucers near Mount Rainier in Washington. Encounters with unidentified flying objects have been recorded since ancient times, but Arnold’s sighting hooked the American public. It was the encounter that launched a thousand theories.

The U.S. military attempted to discredit Arnold’s claims. “The report cannot bear even superficial examination, therefore, must be disregarded,” the Air Force Materiel Command wrote in a now-declassified document.

As reported sightings increased and UFO obsession spread like wildfire, its flames fanned by the notorious Roswell incident, the military attempted to douse the issue. A series of UFO studies commissioned by the U.S. Air Force culminated in Project Blue Book, which wrapped up in 1969 and found no evidence of the presence of extraterrestrial vehicles on Earth or in the skies above.

The Air Force clearly hoped to put an end to the UFO craze—but the studies had the opposite effect. Josef Allen Hynek, who had overseen the Air Force efforts, broke with the military, claiming the importance of UFOs had been underplayed. His scientific analysis forms much of the basis of modern UFOlogy and his close encounters classification system is the benchmark in grading the credibility of UFO sightings.

In devising our own credibility rating system for UFO sightings, Newsweek built upon Hynek’s foundations. The astronomer and preeminent UFOlogist valued sightings that involved multiple or highly credible witnesses. We have also incorporated advances in technology into our scale. The advent of cameras and infrared devices on aircraft have presented new kinds of evidence for sightings.

The credibility scale works on a point-based system. One point is given for sightings with multiple witnesses, another for an expert witness (a pilot, air traffic controller, military or government official). One point is awarded for picture evidence and an additional point for film of a moving UFO. Unidentified flying objects can often be explained away as foreign aircraft, so an additional point is given for UFOs seen to be flying in a manner inconsistent with flight as humans know it.

A system for removing points has also been incorporated to account for cases where military or government bodies have discredited the sightings. Three points are removed in these cases, as the baseline for credibility in the scale begins at three.