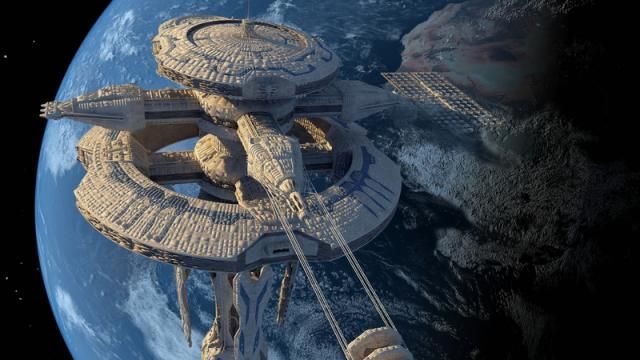 • On November 12th, Russian scientist Dr Igor Ashurbeyli included a foot-long satellite within a NASA resupply rocket to the ISS, containing 0.5 TB of data including family photographs, digital representations of the flag, coat of arms, and constitution for the 18,000 citizens of “Asgardia”, to be subsequently released into Earth’s orbit.

• Thus, Asgardia is the world’s first independent nation to operate in outer space.
• The “nanosat” satellite containing the Asgardia data will remain in orbit for between five and eighteen months, the typical lifespan of this type of satellite, before it burns out and disappears.

• Asgardia’s mission is to provide a “peaceful society”, to offer easier access to space technologies, and to protect Earth from space threats such as asteroids and man-made space debris. The Asgardian team hopes to create habitable platforms in low-Earth orbit.

• Asgardia is free to join. Anyone over 18 years old, with an email address, regardless of gender, nationality, race, religion, or financial standing can apply for citizenship.
• Today, there are 114,000 Asgardians from 204 countries.

• Dr Igor Ashurbeyli is a 53-year-old rocket scientist from Moscow who promoted and single-handedly bankrolled the Asgardia project.

• Asgardia’s administrative center will be in Vienna. They plan to elect a government in March 2018 and will ask to be recognized by the United Nations. To achieve this, the UN’s Security Council must first approve Asgardia’s application to be considered a nation, then two-thirds of members of the General Assembly must vote for its admission.

• The plan is to send the first permanent human inhabitants to an orbiting Asgardia by 2026.

On November 12, Asgardia cemented its presence in outer space by launching the Asgardia-1 satellite.

The “nanosat” — it is roughly the size of a loaf of bread — undertook a two-day journey from NASA’s Wallops Flight Facility in Virginia, the United States, to the International Space Station (ISS).

It contains 0.5 TB of data belonging to 18,000 of Asgardia’s citizens, such as family photographs, as well as digital representations of the space nation’s flag, coat of arms and constitution.

Named after a Norse mythological city of the skies, Asgardia is free to join and so far, about 114,000 people have signed up.

Ashurbeyli says the project’s mission is to provide a “peaceful society”, offer easier access to space technologies, and protect Earth from space threats, such as asteroids and man-made debris in space.

While Asgardia’s citizens will — for the time being — remain based on earth, the satellite launch brings the nation one step closer to space.

Asgardia-1 made its journey to the ISS aboard the OA-8 Antares-Cygnus, a NASA commercial cargo vehicle.

Now it must wait for about three weeks as vital supplies and scientific equipment are transferred from the NASA ship to the six people currently living at the ISS.

The nanosat will then be detached from the NASA vehicle and begin its own orbital journey around the earth. Citizens’ data will remain in orbit for between five and 18 months, the typical lifespan of this type of satellite. It will then burn out and disappear.

For Ashurbeyli, the launch fulfills a pledge he made when establishing the “space nation” to take its citizens to space via their data.

“I promised there would be a launch,” he says. “We selected NASA as a reliable partner … because we have to meet the commitments that I made 13 months ago.”

Getting it off the ground

Within 40 hours of the project being announced in 2016, over 100,000 people had applied for citizenship on Asgardia’s website. After three weeks, Asgardia had 500,000 applicants.

Anyone over 18 years old, with an email address, regardless of gender, nationality, race, religion, and financial standing can apply for citizenship — including ex-convicts, provided they are clear of charges at the time of application.

Today, there are 114,000 Asgardians from 204 countries — a population drop from 211,000 in June, when voting to determine the details of Asgardia’s constitution began.

Only those who agreed to adopt the finalized constitution are counted as Asgardians.

Turkey currently has the largest number of Asgardians, with over 16,500 residents.

Rayven Sin, an artist based in Hong Kong, told CNN that she signed up to become an Asgardian in November 2016 after hearing about it on a Chinese radio show while she was in Toronto.

“I really want to be able to see if human beings are able to have more opportunity to express their opinions,” she told CNN. “The society we live in now — everything seems to be either capitalism or communism — there’s a lot of conflict.

“As a human being, I would hope (to see) if we could have other ways (of living). For a better life, and for more options.”

John Spiro, a digital marketing specialist who organizes a monthly meet-up for Hong Kong-based Asgardians, told CNN it was the possibility of sending personal data into space that excited him.

“I help translate and preserve Buddhist sutras as a hobby and the symbolism of sending one of those religious texts in electronic form ‘up to the heavens’ seemed very nice.”

Out of this world idea

Going forward, the Asgardia team hopes to create habitable platforms in low-earth orbits — the first one located 100 to 200 miles (161 to 321 kilometers) from space, which is also where the ISS is located.

The first human flight to this location is projected to take place in eight years’ time.

“We want to give equal opportunities to everyone who has a mind, who can do something, for their protection,” Ashurbeyli said.

“Our real home is not the house or the city where we were born. (Our) home is planet Earth, (and) we want to protect it.

“(It’s) not a fantasy. Going to Mars, the galactics, so on — that’s just fake. I intend something more real.”

Further satellite launches are in the works but no dates have yet been confirmed.

A 53-year-old rocket scientist, Ashurbeyli says he is single-handedly bankrolling the project — for a sum that’s undisclosed.

Regularly reported to be a billionaire — although he has never appeared on the Forbes rich lists — the Azerbaijan-born Russian graduated from the Azerbaijan State Oil Academy in 1985, and three years later founded Socium, a software and consulting firm turned holding company with over 10,000 employees, according to his website.

After moving to Moscow in the 1990s, he became a heavyweight in the science industry and, in 2010, was awarded the Russian State Science and Technology Prize. Three years later, he founded the Aerospace International Research Center (AIRC) in Vienna, and today he is chairman of UNESCO’s Science of Space committee.

In short, Ashurbeyli is no beginner when it comes to space.

He did, however, resign from all governmental organizations in 2011, according to his website, and now claims to be politically neutral.

At a press conference in Hong Kong in June 2017, Ashurbeyli explained that Asgardia is a project he has been dreaming of since childhood.

“I was interested in doing something unusual that nobody else was doing,” Ashurbeyli told CNN. “It was my dream to create an independent country.”

That ambition became more concrete after Ashurbeyli gave a speech at a conference on space law at McGill University in Montreal in 2016, where he was inspired by a discussion about the laws governing murder, marriage and divorce in space.

“I thought: ‘Why not organize a country?’ Not only for lawyers. But for technicians, for engineers, for every human … because he’s currently restricted by the laws of the country he was born in.”
Currently space law is adhered to in the form of the Outer Space Treaty, signed by 103 countries including the US and Russia.