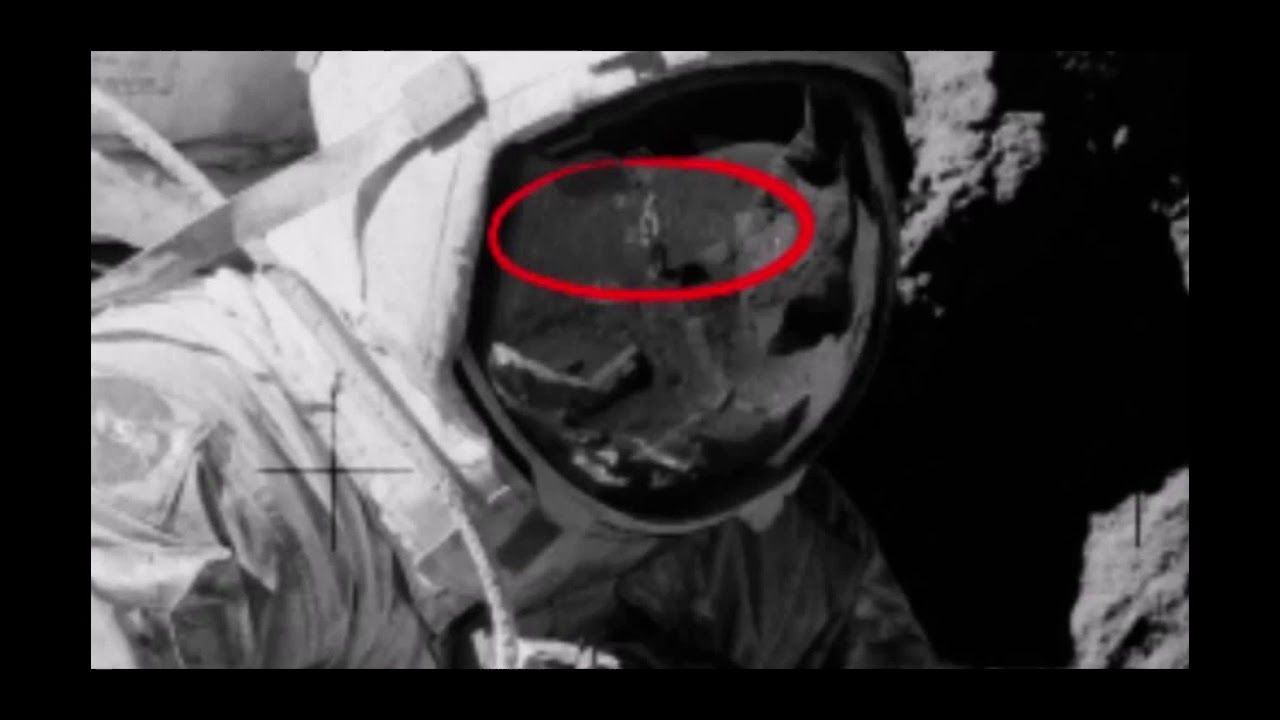 • YouTuber, Streetcap1, has recently posted a NASA stock photo (above) that appears to show a man walking around the ‘moon’ without a space suit during the Apollo 17 mission. Says the poster, “It looks like a man back in the early 70’s, long hair, wearing some sort of waistcoat type thing.”

• In the early 1970’s, the U.S. and the Soviet Union (Russia) were in the grip of a Cold War, and the U.S. was under pressure to prove they could beat Russia in missions to the moon. NASA’s desperation to beat the Soviets has fueled suspicions for nearly five decades that some or all of the missions were shot on a movie set. The man in the image then would have been a stage hand.

• [Editor’s Note] In 2015, a video was going around on the internet purporting to be an interview with Stanley Kubrick in March 1999, just before Kubrick’s death, wherein Kubrick admits to helping NASA fake, or “restage”, the moon landings on a movie set. Kubrick’s daughter, Vivian Kubrick, denied the authenticity of the video arguing that someone with the artistic integrity of Stanley Kubrick would never betray the public. The mainstream has likewise vehemently debunked the video admission.

A stock photo appears to show a man walking around the ‘moon’ without a space suit during the US’s Apollo 17 mission – adding more fuel to the conspiracy that the whole thing was faked.

America has always claimed they put the first men on Earth’s satellite planet when NASA beamed live video footage of Neil Armstrong and Buzz Aldrin supposedly taking their first steps there 48 years ago.

Doubters have always insisted that first mission was faked so the US could claim victory in the Space Race over Russia at the height of the Cold War.

Now fresh images have emerged that suggest that the sixth and final mission – Apollo 17 – some three years later was also faked.

The three man NASA crew – headed by Eugene Cerman – touched down on the moon and walked its surface, the official report said.

But a close-up analysis of one supposed image from the famous expedition that emerged this week suggests the whole enterprise was filmed on a Hollywood movie set.

A video that zooms in on the reflection of one of the astronaut’s visors appears to show a man standing around in a “waistcoat”, according to a YouTuber user who posted the footage.

He suggests the figure, which he says is a man with long hair that fits in with the style for men in 70s when Apollo 17 supposedly landed on the moon on December 7, 1972.

Conspiracy theorists are likely to seize on the video as proof that NASA’s Apollo 17 was staged on a film set.

The US was under massive pressure to prove they could beat Russia in number of missions to the moon during the Cold War.

And their desperation to beat them has fueled suspicions for nearly five decades that all their missions were faked.

YouTube user Streetcap1 posted the footage of the supposed photo – the source of which was not verified – just days ago.

He said: “This is from a moon photograph, a reflection from one of the astronaut’s face visor, so I thought it looked a bit strange, so I took a picture of it using my software.”

“What we appear to have here is a figure of a human, not wearing a space suit, circa early 70s. An Apollo 17 photograph.”

“It looks like a man. Back in the early 70s. Long hair. Wearing some sort of waistcoat type thing.”